Made in Somewhere Else: How Premature Deindustrialization Undermines the Development of Indonesia and other Emerging Economies

This article appeared in ksr.hkspublications.org on March 02, 2020. 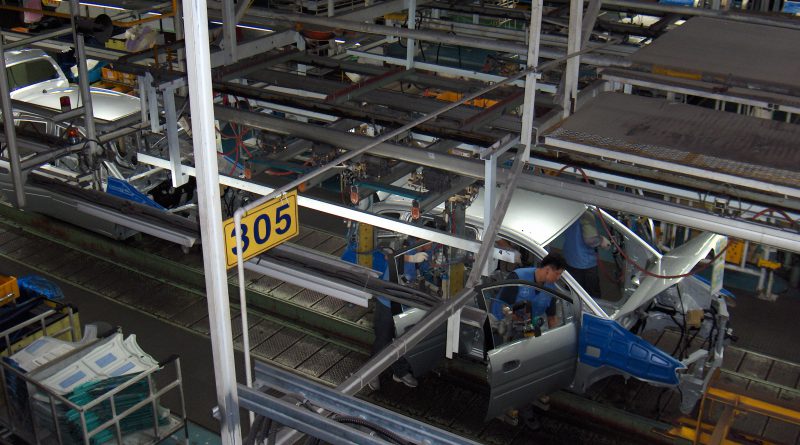 In its 1993 report, the World Bank classified Indonesia as one of the “Asian Miracles”. Indonesia was on the track towards industrialization and development. It had begun to transition from agriculture and raw commodities to manufacturing. In 2000, Indonesia’s computer export was twice the value of its palm oil export.

Fast forward to today, and this progress is lost. According to the latest available data in 2017, Indonesia’s computer exports are negligible, while palm oil has become the country’s largest export, making up 10% of its total merchandise exports.

Indonesia is not unique. Over the past thirty years, other countries in the developing world have undergone similar trends. In general, countries do eventually deindustrialize and shift to services. However, for too many developing countries today, the tendency is to deindustrialize much earlier than their more developed peers deindustrialized in the past. This phenomenon is commonly referred to as “premature deindustrialization,” which signifies that a country shifts its economy away from manufacturing production before having extracted the full productivity gains from industrialization. 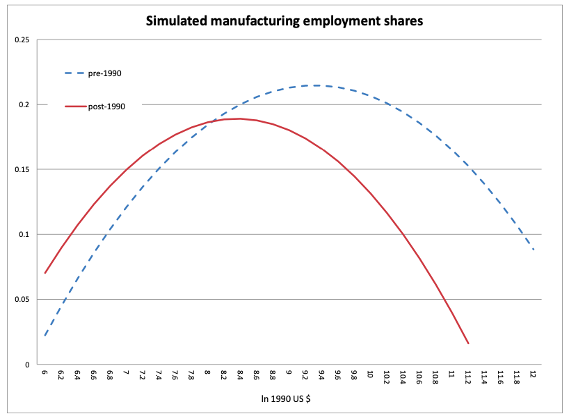 Figure 1: Share of Manufacturing Employment vs Per Capita Income, before and after 1990

Given the importance of manufacturing in the development process, it is essential to understand why premature deindustrialization is occurring in so many developing countries, and what can be done about it.  This article seeks to address this question by focusing on Indonesia as a case study.

Indonesia: Punching Below its Weight

Indonesia is the largest economy in Southeast Asia. Over the past five years, the economy grew steadily at 5%, which lags behind the growth rates of some of Indonesia’s neighbours. For instance in the same period, China and Vietnam grew 6.8% and 6.5% respectively. Furthermore, Indonesia’s somewhat average growth is more jarring given its tremendous potential. Indonesia ranks 6th globally in the Harvard Growth Lab’s Complexity Outlook Index (COI). A high COI means that the country has sufficient capabilities to diversify its industries into more complex, high-value products. Based on this, the Atlas of Economic Complexity projects Indonesia to grow on average 5.8% per year until 2027. Indonesia’s President Joko Widodo even committed to a 7% economic growth in 2019.

However,  recent trends show the economy has been weakening. In the last quarter of 2019, growth even dipped below 5%, rendering the annual growth to be the slowest in the last four years. An average of 5.8% growth rate seems unlikely to happen, let alone 7%. What went wrong? 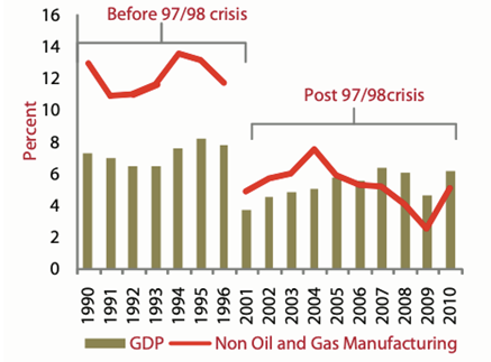 Figure 2: Indonesia’s Manufacturing and GDP Growth Before and After 97/98 Crisis

The Impetus Behind Indonesia’s Premature Deindustrialization

Why have countries like Indonesia been deindustrializing much sooner than was common in the past? There are several possible explanations. Dani Rodrik (2015) points to trade and globalization as one reason, and explains that, “as developing countries opened up to trade…. those without a strong comparative advantage in manufacturing became net importers of manufacturing, reversing a long process of import-substitution”.

Since the turn of the century, there has been enormous pressure for Indonesia to liberalize its trade policy, which may be responsible for its premature deindustrialization. It started with Indonesia joining WTO in 1995, but the arm-twisting substantially intensified following the 1997 Asian Financial Crisis, which forced the country to ask for an IMF bailout. One of the major conditions included in the rescue package was for Indonesia to significantly reduce its trade barriers. In just one year, Indonesia’s average weighted applied tariff for manufactured goods fell from 18% to 6.9% in 1998. Indonesia also took part in several regional free trade agreements.

All of these agreements have one thing in common: they increasingly deprived the Indonesian government the policy space it needed to protect infant manufacturing firms through trade policy. Most of the advanced countries in the past strategically harnessed the space that is barely available today to many developing countries. For instance, the US per capita income (in 2011 US$) in 1913 was approximately the same as Indonesia’s in 2011. At a similar level of economic development, the former had a 44% import tariff to protect its domestic industry, while the latter only levied a 5% tariff. Even in 2016, China and South Korea, with much stronger industrial bases, still imposed higher import tariffs than Indonesia at 6.8% and 11% respectively.

Unfortunately, even if developing nations today can reclaim the policy space, the challenges they face in upgrading their manufacturing are still more formidable. First, manufacturing is now increasingly capital intensive, which sometimes requires more skilled workers. Second, China has now firmly entrenched its dominance as the world’s factory with a solid supply chain, infrastructure, and workforce. Beijing’s manufacturing supremacy has made it harder for other poor countries to compete and follow China’s development trajectory.

Despite the fact that the window for manufacturing is not as open as it used to be, all is not lost. The recent success of Vietnam and Bangladesh demonstrate that it is still possible for developing countries to capitalize on manufacturing as the engine of growth.

The changing landscape of global manufacturing requires governments to be more proactive, adaptive and entrepreneurial. Instead, the Indonesian government has taken the backseat. Consequently, the country has defaulted to its comparative advantage, which is natural resource extraction, at the cost of missed opportunities in growing exports of more sophisticated and higher income-generating products. The government has been, in effect, steering its economy on autopilot.

Structural transformation of a country’s economy hardly — if ever — transpires without active government participation. The government’s support in cultivating the synergy of various inputs is critical. Indonesia is a case in point. Indonesia actually has many products that are “within its reach”. However, the country has constantly underperformed in the sophistication of its exports compared to its neighbors as shown in Table 1 below.

If structural transformation occurs organically, then Indonesia, with a remarkably high Complexity Outlook Index, should have transformed years ago. Indonesia’s failure to take-off, despite the tremendous potential, suggests that merely having the necessary ingredients is in itself insufficient. A country needs many inputs and intermediaries in order to expand its economy’s portfolio to include higher-value products. For example, smartphone manufacturing cannot take place without electricity, land, labor, integrated circuits, cameras, etc. Manufacturing of the intermediate goods would not take place either, if there is no smartphone manufacturing. The manufacturing of smartphones and their intermediate goods can be lucrative, but only with outside coordination to line up the necessary ingredients. This is where government intervention is imperative.

Indonesia is a cautionary tale when it comes to the danger of premature deindustrialization and failure of structural transformation. Manufacturing has historically served as an “escalator” through which many developing countries grow rapidly. If left unchecked, premature deindustrialization threatens the potential improvement in welfare for a large portion of the world’s population.

In this article, we posit that globalization has tied the hands of governments in developing nations, forcing them to drive their countries on “auto-pilot”. The auto-pilot state has contributed to the weakening of manufacturing growth in Indonesia, and it might also contribute to deindustrialization across the developing world. As the forces of globalization and free trade run amok, an “absent” state might nudge developing countries to regress back to raw commodities or shift prematurely to informalized services.

This is not a call for developing countries to completely oppose globalization and isolate themselves from world trade. Rather, it is a call for them to remember that the countries which have benefited the most from globalization, such as China, are the ones where the governments are in the driver’s seat

Dimas Muhamad is a Master in Public Policy candidate at the Harvard Kennedy School (HKS). He is an ardent believer that the Government of Indonesia has much to gain from improvements in its trade and industrial policies. Prior to HKS, he worked for the Indonesian Foreign Affairs Ministry and subsequently the Office of the President.

Monica Nirmala recently obtained her MPH degree from Harvard in Global Health. She is deeply committed to leveraging planetary health through health systems in Indonesia. Prior to HSPH, she was the Executive Director of ASRI, a non-profit organization that leverages community-led solutions as a sustainable approach to planetary health in Bornean rainforests, Indonesia.

Freida Siregar is an MPP candidate at the Kennedy School. She is passionate about innovation and service delivery in the public sector, and the use of evidence to improve decision-making. Prior to HKS, Freida worked with economists and government agencies in Indonesia and Pakistan to improve social programs through randomized evaluations and evidence adoption.

Jane Tjahjono is a Master in Public Policy candidate at the Harvard Kennedy School (HKS). Prior to HKS, she was a Research Assistant at the World Bank in Indonesia analyzing the impacts of the Village Law and Fund Transfer program, a flagship policy to decentralize development at the village level. Jane holds a BA in Economics from Covenant College.