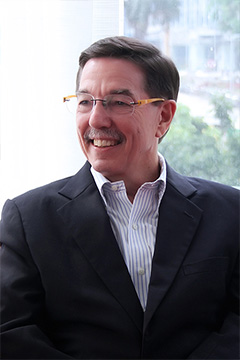 It is an honor to introduce myself as Executive Director of AMINEF, the binational foundation that manages the Fulbright Program in Indonesia and several other related educational exchange programs funded by the US Department of State, the Government of Indonesia, and other funding sponsors.

I joined AMINEF in October 2014, and doing so was a kind of homecoming for me. I have a long personal and professional connection with Indonesia, having first come here in 1971, as a recently graduated college student, with a group of others interested in Indonesia’s performing arts heritage from several American universities. We studied Javanese and Balinese gamelan music, dance, and wayang, and that trip, supported by a private foundation, the American Society for Eastern Arts, changed the lives of most of us. Another ASEA grant in 1975-1976 allowed me to study Indonesian and Javanese language in Solo, and to continue study of Javanese performing arts in Yogyakarta and Solo. After pursuing graduate study at Wesleyan University, Middletown, Connecticut, my undergraduate alma mater, too, and at the University of Michigan, Ann Arbor, I was fortunate to receive a Fulbright-Hays Doctoral Dissertation Research Abroad fellowship to do research on Javanese literature and music in Solo from 1984-1985. I earlier was involved in a manuscript preservation project in Solo and Yogya in 1980-1981, and later worked for the Ford Foundation’s education and culture programs in Jakarta from 1986-1994, a job that took me all over the archipelago and involved support for projects in numerous fields of social sciences and humanities. I thus have accumulated about fifteen years of unforgettable experiences in Indonesia.

I can say first-hand that opportunities like those I was lucky enough to be given have a transformative power: through them we come to learn, to know other cultures, languages, contexts, beliefs, realities. This is not only enriching and educational, but can also open doors to other personal opportunities and careers. When I first joined an amateur Javanese music group at Wesleyan those many years ago, I never imagined that it would lead to a Fulbright grant, years of fieldwork study in Indonesia, work as a Ford Foundation program officer, and, eventually, a return to Indonesia to head up the Fulbright Commission in Indonesia, the very grant scheme that helped me come to Indonesia those many years ago. My own life’s journey may be sui generis, but I believe the same claim of having one’s life changed forever by the Fulbright and similar exchange experiences can be made by most Fulbright grant recipients – American or Indonesian, or those from the other 155 countries where these grants are offered. As Richard Arndt has written, “There have doubtless been Fulbright grantees, returned from their experience abroad, who do not report a life-change. The fact is, I have never met one” (The Fulbright Difference, 1948-1992)

One of my personal reasons for taking up the offer to come to AMINEF, after working for four international philanthropic foundations in Asia from 1984 to 2009, was its emphasis on grants to individuals, a modality that many international foundations seem to have abandoned in recent years. As Damaris Kirchofer has written,

At the heart of the Fulbright Program is the belief that individuals can make a difference in the world, and that it is the proper business of governments to promote and encourage such possibilities. It is individuals who must decipher and map the world, interpreting its significance with others through inquiry and reflection. Fulbright scholars, individual by individual, person to person, must therefore be counted among the essential players in the continuing attempt of the people of all nations to understand one another.

The Fulbright Program will celebrate sixty-five years in Indonesia in 2017, and AMINEF will celebrate twenty-five years of running that program. We plan to take the opportunity of those anniversaries to focus public attention on what the program has meant over the years, allowing the individual voices of those whose lives have been transformed to be heard. The alumni from our programs are often extremely successful upon their return and the alumni list of Fulbrighters is like a “Who’s Who?” of Indonesian specialists in the US and of leaders in a host of academic, press, diplomatic, government, and private sector fields in Indonesia. The legacy of those individuals is something to be proud of in and of itself.

But we also want to see what the combined voices of the thousands of alumni add up to, too. How has this long-standing and prestigious educational exchange program affected institutions, public and private, or policies relating to exchange, or branches of scientific inquiry? As a keystone of America’s public diplomacy, how has the Fulbright Program’s crucial corollary goal of improving mutual understanding between Americans and Indonesians been achieved on the personal and institutional, and even governmental, levels?

We hope to answer some of these questions in the year or so to come, and urge our many alumni and partners to help in the process.

Alan Feinstein has a long career in philanthropy, education, culture, and development in Southeast Asia, He himself was a Fulbright-Hays Doctoral Dissertation Research Abroad fellowship grantee in 1984 when he carried out ethnographic field research on performing arts in Central Java toward a PhD (candidacy achieved) at the University of Michigan. He received a BA from the College of Letters at Wesleyan University, and did graduate work towards MA and PhD in ethnomusicology at Wesleyan University and the University of Michigan, Ann Arbor.