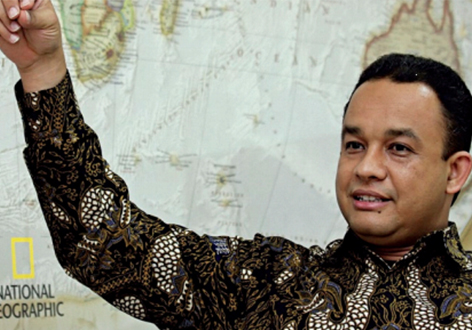 The Effort to Enlighten Must Go On

One day, an Indonesian student’s car broke down on a freeway in the United States. Coincidentally, an ordinary driver passed by and rescued him. However, in order to help him, that person had to turn and drive back more than 45 miles.

“Gosh, how can I thank you? How can I pay you?” said the Indonesian student. His full name was Anies Rasyid Baswedan. He was fascinated by the kindness of the person who helped him.

“Ah, that’s easy,” replied the man. “If you see people getting into trouble on the road, you stop. You help them. In that way you will have paid me back.”

Anies was very impressed. To repay a person’s kindness in return, we do not have to pay it to the same person, but to others. That is what he experienced when he was on a Fulbright scholarship.

“The Fulbright Program inspired me to channel scholarships to many other people,” said the man who has been rector of Paramadina University since 2007.

His mother, Prof. Aliyah Rasyid, was a professor at Yogyakarta State University. His father was an intellectual who had been deputy rector of the Islamic University of Indonesia. His grandfather, Abdurrachman Baswedan (AR Baswedan), a founder of the Republic of Indonesia, was a leading journalist who had been the minister of information. With such a heritage, Anies grew up to be an intellectual himself, spearheading the Indonesia Teaching Movement, which sent thousands of young volunteers to become teachers in remote places in Indonesia.

“Every effort that enlightens, educates, and develops the nation must go on,” he said. He would also like to invite all of the intellectuals in the world to come and study in Indonesia. “This country is a warehouse and an exporter of scientific knowledge. See how rich our natural environment is. And see our social and cultural richness, as well,” said Anies.

The journal Foreign Policy in the United States once cited Anies Baswedan as one of 100 worldclass intellectuals along with people like Samuel Huntington, Francis Fukuyama, and Thomas Friedman, among others.

Anies holds to the principle that it is better to light a candle than to curse the darkness. He was born in Kuningan, West Java, in 1969, but grew up in Yogyakarta until he graduated from the University of Gadjah Mada. Anies received the Fulbright scholarship for a master’s degree in economics and international security policy at the University of Maryland in College Park.

He remembers that the Fulbright scholarship was just enough to live on, hand-to-mouth. “The scholarship funds were given in advance and we had to take care of tuition payments ourselves. If all of the money was used for tuition, how could we eat?” he recalled. So, when the campus registrar asked, “How can we help you?” Anies asked in return, “Is it true that you will help me?”

In fact, it was true. Anies was assisted in how to manage his tuition payments so that he could still afford to cover his daily needs. It turned out that a lot of people helped him, so that he was able to achieve success as a professor. And if he asked how he could repay the people who helped him, the answer was the same: Help others. Distribute scholarships, educate and enlighten society, and never stop.

The challenge is how to deliver assistance effectively and optimally. Anies suggested that scholarships be awarded not only to students who want to earn master’s or doctoral degrees. “If scholarships are awarded to people who have already succeeded, such as leaders, experts, managers and directors who are influential, in that case, a blog written by a director, for example, might be read by up to 5,000 people a day,” he said. “Whereas a student or a teacher who receives a scholarship would only be able to play such a role after a few years time. It would not be immediately large. So, to speed up the expansion of enthusiasm and information, it would be good to award scholarships also to those who are already successful.”

This article appears from the book of Across the Archipelago, from Sea to Shining Sea Commemorating the 60/20 Anniversary of Fulbright and AMINEF (Page 81– 83) published in 2012.