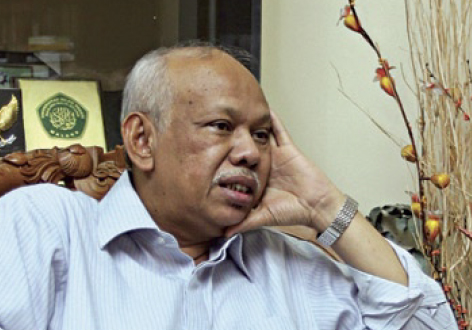 “The most significant role of the Fulbright Program is in building a modern and democratic society. I have felt myself to be an example of this. As an alumnus of the program I was often invited to speak and even to become a member of a world body for democracy development,” said Azyumardi Azra, CBE.

Born in Lubuk Alung, Padang Pariaman, West Sumatra, in 1955, he was awarded a Fulbright scholarship for master’s and doctoral study at the Department of Middle Eastern Languages and Cultures at Columbia University in New York. “I think that without a Fulbright scholarship, many of us would not have become the people we are today,” he added. Thanks to being financed and educated at a prestigious university, according to Azyumardi, he acquired “a strong standing as a nationally and internationally recognized scholar.” He was a member of the United Nations Agency for the Development of Democracy and served twice as a member of the International Institute for Democracy and Electoral Assistance, based in Sweden.

“I had the opportunity to advise the President of the United States as well as the Muslim community in Indonesia,” said this former rector of the Syarif Hidayatullah State Islamic University in Ciputat (1998 – 2006). President George Bush invited him to speak directly with him during a visit to Bali. “The relationship between Indonesia and the United States at that time was tense. Many of the bombings in Indonesia were claimed by the perpetrators to be caused by hatred towards America. I said that this ‘circle of violence’ will not solve the problem.

The violence of the World Trade Center attack in New York, which resulted in attacks on Afghanistan and Iraq, produced no results,” said Sir Azyumardi. In 2010, he received the CBE, Commander of the Order of the British Empire, a title of nobility from the United Kingdom. With this title, Azyumardi is entitled to use the honorific “Sir” before his name.

The father of four children, he was grateful that after Barack Obama became president the hatred towards Americans fell drastically. “Our society cannot hate Obama because he has a Muslim father and was educated in a large Muslim country where you hear the call to prayer every day,” said Sir Azyumardi, who was a professor at the University of Melbourne in Australia and a member of the board of trustees of the University of Islamabad in Pakistan.

He was asked to discuss what President Obama has done in a series of seminars in the Middle East. “What Obama has done is to lower tensions between the United States and the Islamic world. What he hasn’t done is to create peace in Palestine,” he said. He spoke in Cairo and Alexandria, Egypt, and Jordan.

Sir Azyumardi thinks that the Government of Indonesia should play more of a role in developing the Fulbright scholarship. “It would be good if our government could finance the daily living expenses of American Fulbright lecturers who teach here. For all this time,” he said, “their travel costs and stipends have been paid by the United States. AMINEF can seek a more participatory financing scheme from the Indonesian side.”

According to Sir Azyumardi, the presence of Fulbright lecturers from America has a very important and symbolic meaning. “Moreover, when they come to my university, the symbolism is very clear, because they are mostly, or even all, non-Muslims. They are well-received as lecturers in the Islamic community. One Fulbrighter who came to my university even said frankly, that he was a Jew. This was wonderful, because in this way a true dialogue can take place,” he said.

“Unfortunately, our universities in Indonesia have not yet been able to provide much beyond inviting and providing an office and Internet facilities. Our government should play a role by providing funds that will allow them to come to teach for several semesters. I think that this is what should be sought by AMINEF,” said the chairman of the graduate program of the Syarif Hidayatullah State Islamic University from his office.

This article appears from the book of Across the Archipelago, from Sea to Shining Sea Commemorating the 60/20 Anniversary of Fulbright and AMINEF (Page 84– 87) published in 2012.