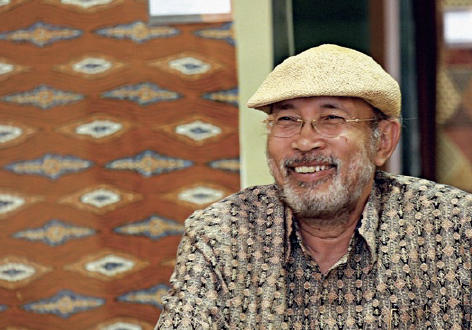 A Greater Role for Art

Biranul Anas Zaman is a renowned contemporary fiber artist known for his tapestries and a professor in the Faculty of Art and Design at the Bandung Institute of Technology (ITB). A Fulbright research scholar at the University of California at Berkeley in 2000, he credits the grant with having played a large role in his career.

“Intellectually, I gained a broader insight about the field in which I had applied myself, particularly in the context of its strong ties to science and technology. I had the opportunity to meet with many scientists from different countries who were studying in the United States, so that my understanding of their ways of thinking about and dealing with problems, in their fields or in life, in their respective countries was both deepened and more detailed.

“The same is true of the technology that provides the knowledge, techniques, and inspiration to solve problems in my field. All of this had a positive impact on the development of my skills both in terms of conceptualization and idea development, as well as with implementation. Because of this, it is important that first there be established in Indonesia the spirit of intercultural understanding together with interdisciplinary networks among the sciences; and second, that there is consistency in developing critical thinking, innovative and creative ideas, and effectiveness and efficiency in their implementation.”

Biranul, who was born in Malang, East Java, in 1947, feels positive about relations between Indonesia and the United States. “They are good in terms of culture,” he said. “I never encountered any problems while in the United States, I think because both are democratic and multicultural countries, so that the level of tolerance in the two of them is high.”

He said that “Fulbright plays a significant role because it is based on a principle of mutual cultural understanding. This is particularly apparent in the higher education exchange programs that promote scholarly exchange among experts and academics at many levels. I cannot emphasize this enough, since a good education produces qualified individuals with highly adaptive abilities together with strong thinking skills, ready to face and solve problems well.”

With regard to the exchange of Fulbright scholars, Biranul, also known as the “king” of traditional Indonesian textile design, gives the following recommendations: “I would like to see the Fulbright Program pay attention to the scientific disciplines especially important to Indonesia as an archipelago. Indonesia’s geography puts it in the middle of extremely complex issues in the fields of science, technology, law, economics, politics, communications, and transportation, among others,” he said.

Given the archipelagic nature of Indonesia, he suggests putting special focus on areas outside Java, especially those places far from centers of power and control, in order to prevent social, political, and cultural instability. Likewise, for Americans, priority should be given to those who are willing to work in peripheral regions, in fields that relate to the areas’ most pressing problems.

“Knowledge, concepts, ideas, and personal development need to be advanced in both countries. Both face similar issues of cultural plurality, and both have dark and bright histories in overcoming their problems,” he said.

“They can learn from each other’s experiences so that in the future they can better resolve these issues. From a cultural perspective, in attaining these goals, programs and exchanges in the fields of art, design, and crafts can take a greater role.”

This article appears from the book of Across the Archipelago, from Sea to Shining Sea Commemorating the 60/20 Anniversary of Fulbright and AMINEF (Page 91– 93) published in 2012.