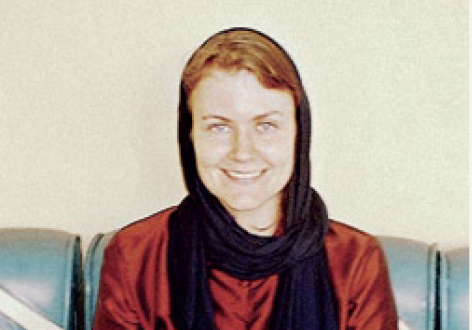 A professor once told me that you have to fall in love with a topic to do a PhD. It was easy to fall in love with Indonesia; I became interested in so many things right off the bat — music, society, culture, history. But I think my love of the country really was sparked by the fact that the people I met were so friendly. That might sound like a cliché, but they were just so welcoming, and I don’t think that exists everywhere in the world.

In 2002 I did the COTIM program, a group language study program funded by Fulbright-Hays. That brought me to Sulawesi and ultimately led to my PhD research there under a FulbrightHays grant. The professor in charge of the COTIM program knew I was interested in music, so one day he invited me to the kampung Arab in Manado to hear traditional wedding music. I found Arab-Indonesian music so interesting (and, to be honest, fun). It was a tradition I’d never read about in my ethnomusicology studies, and I knew almost nothing about Arab-Indonesian history and culture. When I got back to Brown University, I knew that’s what I wanted to explore in my dissertation.

In the end, I spent about three years in North Sulawesi visiting Arab communities in Gorontalo, Manado, and Sangihe Talaud. I learned a lot through discussions with Islamic scholars and kampung history keepers, who were mostly older men. But I also found the women I met to be profoundly wise, and expressive. I would spend hours sitting on stoops with women who were in their house dresses, discussing their family histories and their philosophies on child rearing, or engaging in humorous wordplay, or discussing the war in Iraq and the Bush administration.

People wanted to talk to me about the Iraq war. Indonesian perceptions of America were low during the war, and offhand comments about the United States were frequent. I found, though, that when Indonesians met me they wanted to have a positive exchange, often by showing me why they loved their culture and their religion. It was really the exact purpose of the Fulbright Program.

And today I’m happy I can be in a job where I’m involved with Indonesia. At Voice of America’s broadcasting office in Washington, DC, I work with dozens of Indonesian journalists, TV specialists, and radio personalities. Indonesian is the largest program in the VOA’s East Asia Division after Mandarin, and of all VOA programs, they have one of the largest audiences. From here I’m still in touch with my friends in Indonesia. When I left in 2006, we had only text messaging to stay in touch, but Facebook has since changed everything, to the point where I’m connected with these friends on a daily basis. We used to all be unmarried, going to weddings together, and now we share photos of our kids online. And we’ll continue to stay in touch. It was an unforgettable time in my life.

This article appears from the book of Across the Archipelago, from Sea to Shining Sea Commemorating the 60/20 Anniversary of Fulbright and AMINEF (Page 94– 96) published in 2012.