The article originally appeared in epaper.thejakartapost.com on September 13, 2019 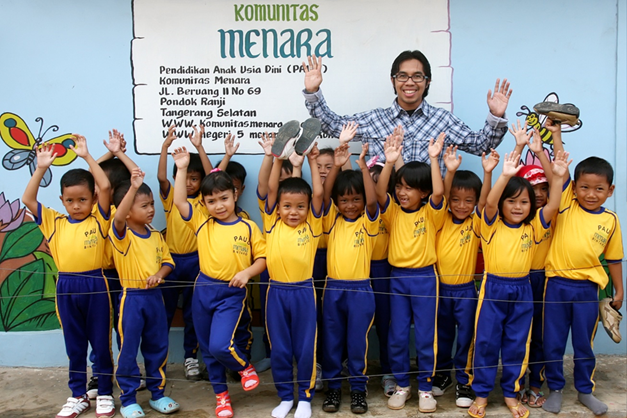 Traveling overseas to pursue one’s education is the dream of many Indonesian students, including Ahmad Fuadi, a young student who studied at Pondok Modern Darussalam Gontor, an Islamic boarding school, in East Java. But a couple years later when his dream came true, he had another dream. Maninjau-born Ahmad, best known as A. Fuadi, wanted his life to bene t others. Through the novels that he has written, he has achieved his ambition.

The 45-year-old recalls how his childhood experience partly contributed to his current profession as a novelist, saying that his family allowed him to become well-versed in books and literature.

“My mother and father, both were teachers, frequently bought us story books and newspapers as souvenirs whenever they came home from a visit somewhere,” he says.

His grandfather, he says, had his own personal library, which only a few chosen people were allowed to use. “Luckily, I was one of them,” he told the Smart Living team on Tuesday evening.

But the author, who made his debut with his rst novel Negeri 5 Menara (The Land of Five Towers), says that a story ignited his urge to write a story based on his real-life experiences.

Once upon the time, without his mother’s knowledge, he silently entered her room to nd her black diary that he had seen earlier but had never had the chance to open. Out of curiosity, he read the diary. It contained notes on cooking recipes, debts and accounts receivable, but “I also found the story of our lives as a family written, even though it was presented in a disorderly way,” he says.

“But the writing raised my awareness that we are allowed to write a story based on our lives,” the father of one recalled, adding, “Owing to my childhood familiarity with books, I always want to maintain the root of literacy despite the increasing shift by people to gadgets in terms of reading.”

The experience drove Fuadi to write a novel, part of the content of which was taken from his highly memorable four-year experience in Pondok Modern Darussalam Gontor.

Fuadi’s initial journey toward recognizing the outside world dated back to 1988 when he left his home town and family in Bukit Tingi, West Sumatra, for Java to pursue his studies at the school.

It was the rst time for the 15-year-old Fuadi to leave the comfort zone of his ethnic group and live with about 3,000 people from different ethnic groups from across Indonesia and also from other countries, including Singapore, Thailand and Australia.

The international setting, which excited him greatly, evoked a new spirit as “we can cross geographical boundaries, culture, language and we have the right to pursue studies anywhere we want. These things are cultivated in my memory,” he recalls.

His first encounter with international travel was when he had the chance to join the International Education Program, Canada World Youth, Montreal, Canada in 1995-1996. After that he received other scholarships, including a Fulbright scholarship to George Washington University, Washington D.C. (1999-2001) and the British Chevening scholarship to the University of London in 2004.

Fuadi acknowledges that he had no intention of writing a novel until 2008 when he had a good position as a communications director of United States-based Nature Conservancy. “The position gave me more than enough of a salary for my family,” says the graduate of Padjadjaran University.

But the comfort zone left him extremely restless. Arabic proverbs always ring in his ears, one of which became his mantra, “Of the good things that a man does, that which bene ts others is the best.” Another one says “He who gives his all will surely succeed.”

The experience drove A. Fuadi to write a novel, part of the content of which was taken from his highly memorable four-year experience at Pondok Modern Darussalam Gontor.

To Fuadi, the words were so powerful they obsessed him, which ended up in his making a decision to resign from the job and begin to pursue a new career as a novelist.

Fuadi’s dream of writing a novel came true when he published his rst novel in 2009. The novel, which broke the publisher’s sales records, was the rst part of the Negeri 5 Menara trilogy. His works that followed were Ranah 3 Warna (The Earth in Three Colors, 2011) and Rantau 1 Muara (2011).

To date Fuadi and his wife Danya Dewanti have visited 53 countries. “When we are invited to attend a book fair, a book festival or to be a speaker overseas, we always extend our stay to visit two or three nearby countries,” he says.

The author has found that his overseas experiences serve as capital or valuable materials for his writing. In his trilogy, the US, United Kingdom and Indonesia, especially the pesantren (Islamic boarding school), are the settings for his stories.

This overseas experience has also made his novels universally acceptable, especially when it comes to good deeds that he wants to insert in the works, in addition to his memorable experience during his teenage years in the pesantren, he says.

“We can learn from various cultures and what the advantages and the shortcomings are. What makes me aware is that we, as the world population, share something in common, but also differences. And we have to respect the differences,” says Fuadi, who once was a correspondent and reporter for Voice of America (VOA).

According to him, writing helps to soften the ego if the piece is to be published because everyone has their own opinion. “Many may admire the work but many others may not like it. I have to accept that,” says Fuadi, recipient of The Best Novel and Fiction Writer, National Library of Indonesia, 2011 and Best Fiction, Islamic Book Award 2019 for his book, Anak Rantau.

As a novelist, he acknowledges that he sometimes faces hurdles moving forward, but he knows well how to deal with them.

A lack of research is one of the major issues, he says “That is why when it happens, I have to do more research, read more relevant materials, do more interviews, observations, etc. Using more research makes the story believable. With more materials available,

I can continue to write,” says the fan of legendary Indonesian author Pramoedya Ananta Toer.

The former Tempo magazine journalist says that writing is a self-struggle, beyond simply a profession as a journalist or reporter. “As a journalist, we work based on a deadline. Editors will remind us [of the deadline]. So, the challenge as a writer is, I think, how to conquer ourselves. No one will force us but we have to have a commitment to produce work,” he says.

Fuadi has proven himself to be a commercially successful writer as he says, “I feel that I am one of the few writers who are lucky. Through my novels, I can earn a living because my books are best sellers, which give me more than enough. Imagine if my books were not best sellers, I might have not survived from writing.”

His best-selling books give him nancial advantages because the derivatives, which include lms, web series and animations have added to the revenue sources.

“If the books have inspiring elements, then I am frequently invited to be a speaker. For example, when Negeri 5 Menara was booming, I was invited to speak three or four times a week across Indonesia and once or twice overseas,” he says happily.

What has surprised him, he says, is that the invitations do not only come from reading clubs, but also from campuses, government of ces, banks and medicinal plants.

The good sales of his books led to Fuadi encountering a new experience, which one way or another he had to accept philosophically. One day, he went to his home town in Bukit Tinggi where he visited Atas Market and someone offered him books. “These are good books,” the man said.

“To my surprise, the books he offered were written by me. The books were pirated. The book cover and the contents were exactly the same but on different quality paper,” he says. Before he said anything, his friend came and congratulated him for having his books pirated as it proved how popular his books were.

As he hoped, the novels that Fuadi has written have brought bene ts to others. When several elementary schools were damaged by an earthquake that hit Padang in 2009 and in early 2019, Fuadi, in collaboration with a publisher, printed a special edition on earthquakes to raise funds for the reconstruction of the destroyed schools. “This is a priceless experience that exceeds my material satisfaction,” he points out.

Preparing a historical novel that highlights the US presence in pre-independence Indonesia is part of Fuadi’s current writing project.

With his novels, Fuadi is one of the young Indonesian novelists to have made their dreams come true thanks to their commitment and consistency. If he can do it, then so can we!

His Fulbright experience is profiled on Fulbright Indonesia 60th and AMINEF 20th anniversary publication “Across the Archipelago, from Sea to Shining Sea”