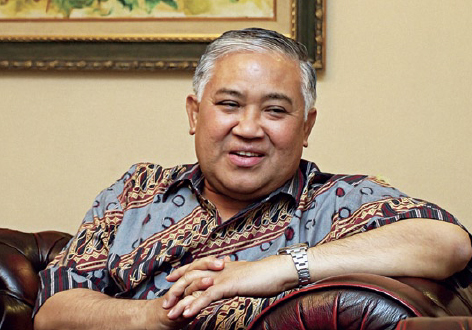 The Ethos of American and Islamic Progress

“Despite all its shortcomings and excesses, the United States is a tremendous inspiration to me. I am very grateful for having received the Fulbright scholarship and for being accepted at a leading university,” Din Syamsuddin said. He was included among those given a special opportunity to study about Islam at the University of California, Los Angeles (UCLA).

He lauded the university for approaching Islamic studies not only in religious terms but also through the study of language and sociology. Two languages are mandatory in the program: Arabic and the language of a country where the majority of its citizens are Muslim.

”My mentor was a Jew who is fluent in Arabic, so we communicated and discussed issues in Arabic. Thanks to his guidance, I completed a doctoral program in two and a half years,” he recalled. “When I became a student in the program, I was elected chairman of the Muhammadiyah youth wing. By chance, I was home on vacation when it happened, so I was able to accept the position.”

He was born in Sumbawa Besar in 1958, and he is grateful for the strong intellectual foundation he received and also for the political experience he gained with Muhammadiyah.

“As a graduate of a U.S. university and an alumnus of the Fulbright Program, I felt I had a good sense of self-confidence. For me, the ethos of excellence, the ethos of competition, and the progress that I saw and experienced in the United States very much reflect Islamic values. All of them are Muhammadiyah values as well. So, in spite of shortcomings they might have, the American people have truly applied Islamic lessons,” he said. While in America, he had the opportunity to give lectures and even to form a group focusing on Islam, Indonesia, and modernity, which went well.

The current chairman of the Muhammadiyah Central Board, Din Syamsuddin admits to going through a phase where he was sharply critical of America. “After September 11, 2001, I became the most vocal person rejecting President Bush’s policies, which had raised a strong response. In my view, what Bush did was harmful to world harmony. But criticizing Bush’s politics isn’t the same as hating America.”

Din Syamsuddin is known as the initiator of a rally in Jakarta in 2003 that drew a million people to protest the American invasion of Iraq. “It was my responsibility,” he said. “I took the initiative—I was the leader—but the action was the joint decision of several national figures. I had invited one hundred such people, including Amien Rais, Nurcholish Madjid, and other prominent leaders, to condemn the invasion.”

Even so, Din still worked to build cooperation in order to establish a dialogue that would enhance mutual understanding with those who represented the U.S. government in Indonesia. He organized a number of dialogues for Ralph Boyce, the U.S. ambassador to Indonesia at the time, with Islamic hardliners to discuss controversial issues.

“Greta Morris, the former public affairs officer at the U.S. Embassy in Jakarta, who is now the U.S. ambassador to the Marshall Islands, is my friend,” he said. “Together we held forums for open dialogue on several occasions to bridge the gap between the United States and the Muslim community. At that time our relationship was very poor. In Indonesia, more than 54 percent of Muslims were anti-American, and that figure was supposedly equal to the 54 percent of Americans who suffered from Islamophobia,” he recalled. “The situation improved through this dialogue initiative.”

Regarding cooperation and assistance from America to Indonesia, Din Syamsuddin hopes it will become more flexible. “Its intention should not be just to have a government-togovernment relationship, but also links between non-government institutions,” he said. As an example, he described the relationship between Muhammadiyah and Johns Hopkins University in Baltimore, Maryland, that has spanned more than 40 years. “We work together on health projects,” he said.

“In particular with Fulbright scholarships, these need to be activated again for Islamic studies. Before, the language-study component for Islamic-majority countries was only available in Persian, Turkish, and Urdu. Recently, Indonesian has been added to eligible languages for Islamic studies programs, since here we have a great many adherents,” he said.

This article appears from the book of Across the Archipelago, from Sea to Shining Sea Commemorating the 60/20 Anniversary of Fulbright and AMINEF (Page 103– 105) published in 2012.