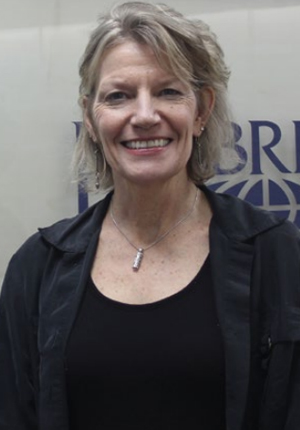 Two Fulbright US Scholar grants—one in 1999 and another in 2017—have allowed her to delve into the Islamic sounds of the archipelago.

In early July 2017, Anne Rasmussen found herself in an Indonesian recording studio in Ciputat. On her lap she held a smooth, pear-shaped lute—known in the Arab world as an oud.

That might seem an unusual instrument to be toted around by an American woman of Scandinavian and German ancestry. But together with her close friend Qaria’ah Hajjah Maria Ulfah, Anne leaned into a microphone for renditions of sholawat and tawasih, two different genres of Islamic song with Arabic text.

The oud has opened many doors for Anne over the years, leading to deep friendships across Indonesia, the United States, and the Arabian Gulf. Performance and scholarship are closely linked in her work as an ethnomusicologist. Sound clarifies intellectual insights.

When she picks up her instrument and joins other musicians, such collaborations lead to “creative intimacy,” 58-year-old Anne explains. “Making music really expands your relationships and your world.”

She began playing the oud and interviewing Arab American musicians in the mid-1980s as a graduate student in California, and much later she conducted fieldwork in Oman. Initially, she never guessed that her musical path would extend to Indonesia. Two Fulbright US Scholar grants—one in 1999 and another in 2017—have allowed her to delve into the Islamic sounds of the archipelago. Bringing her oud to a variety of encounters, Anne found warm acceptance at Islamic boarding schools and prayer gatherings. She paid close attention to the patterns of Arab music incorporated into Qur’anic recitation in public competitions and televised performances.

She is forthright in her conclusion that women in Indonesia play a far more active role in reciting the Qur’an than women in the Middle East. In contrast to places like Egypt and Saudi Arabia, Anne finds that women’s voices in Indonesia are considered “neither shameful nor defective,” and they “represent neither temptation nor danger.” In fact, Indonesia’s female champions are considered among the best reciters in the world, and their vocal artistry is in no way inferior to that of men, Anne asserts.

Her cross-cultural work has won respect for its pioneering qualities. “No other musicologist has been able to bring such knowledge of Arab practice to bear on field observation of Islamic music in Indonesia,” says Philip Yampolsky, who recorded, edited, and annotated a series of 20 albums for the Music of Indonesia series, published by Smithsonian Folkways Recordings. While a bevy of scholars have focused on the intricacies of Javanese and Balinese gamelan music, Anne’s work “reveals the richness and seriousness of a wholly different tradition in Indonesia,” he adds.

Her seminal book Women, the Recited Qur’an, and Islamic Music in Indonesia was published in 2010. According to Andrew Weintraub, a professor of music at the University of Pittsburgh, it represents “one of the few studies of Indonesian music to focus on women, another lacuna in Indonesian music studies.” A volume that Anne subsequently coedited with David Harnish in 2011, Divine Inspirations: Music and Islam in Indonesia, exposes readers to a wider variety of Indonesian sounds, including dangdut, a pop culture staple, and orkes gambus, which features an Indonesian variety of oud music.

Anne straddles various platforms to disseminate her ideas. She teaches at the College of William & Mary in Williamsburg, Virginia, where she serves as a professor of music and ethnomusicology. “I think my work is a bit of a myth-buster. Westerners think that Islam is a faith where women get the short end of the stick,” Anne observes. She also took the reins as president of the Society for Ethnomusicology in 2015–2017, urging her colleagues to do their utmost in sharing the fruits of their research. For example, Anne is collaborating with the Mizan Group, a Jakarta-based publishing house, on a forthcoming Indonesian translation of her 2010 book.

During her stint as a US Fulbright Scholar in 2017, she got involved in 17 workshops and seminars in Java and Sumatra, where music was not the only subject at hand. Students and faculty asked questions about Muslim life in the United States and about the obstacles faced by women in politics and academia.

Fulbright has given Anne “a fundamental experience in global citizenship that I’m not sure I could acquire by just sitting at home and reading the New York Times,” she observes. “It’s a huge bundle of life lessons, which I hope will trickle down in my teaching and writing.”

Raised in Massachusetts, Anne initially applied herself to learning classical music for the piano and cello. Long hours of practice augured a lonely existence. So she decided to plunge into musical theater. She had fun, but didn’t envision a promising future. Then, while enrolled at Northwestern University in Illinois, she took lessons in jazz—leading to some exuberant gigs in Paris nightclubs.

She loved the improvisation integral to jazz. And that’s exactly what spurred her affection for Arab and Turkish music, in all its improvised ornamentation. Under the tutelage of A. J. Racy, an accomplished Lebanese musician who teaches ethnomusicology at the University of California, Los Angeles, she gravitated to the oud. She also discovered that Arab American musicians were happy to welcome her on stage.

Her first experience in Indonesia was the result of some personal improvisation. In 1995, her husband got a job in Jakarta and she decided to accompany him. From her window, she could hear strains of Arab melodies and curiosity led her further afield. At Festival Istiqlal, held at an iconic mosque in Jakarta, she was introduced to the woman who would play a particularly influential role in her life: Qaria’ah Hajjah Maria Ulfah, a champion reciter of the Qur’an and a driving force behind the Institut Ilmu al-Qur’an (IIQ).

Thus began her quest to understand the social, political, and aesthetic parameters of Qur’anic recitation. From the 1700s to the 1900s, recitation was transmitted by Muslim traders who settled in coastal areas, or by Indonesian pilgrims to Mecca. After Indonesian independence, famous reciters from the Arab world visited Indonesia and much later, during the Suharto era, studying the Qur’an was encouraged as a spiritual and civic duty, Anne explains.

Maria Ulfah and her pulmonologist husband, Mukhtar Ikhsan, were struck by Anne’s diligence in musical research. When in Jakarta, their home is her “base camp.” Even at meal time she has a pen and notebook at hand, continually raising questions about context and technique. In a culture heavily reliant on oral tradition, they had never encountered such zeal for documentation. Anne could replicate a melody with ease, even after ten years had passed from the time she first learned a particular passage. “It was exactly what I had taught,” marvels the IIQ scholar born in Lamongan, East Java.

The professors and students were well aware that Anne was not Muslim. But this did not prove to be a barrier. “The Qaris (reciters) were fascinated by her presence,” recalls Dadi Darmadi, who assisted her with interviews at IIQ in 1999, the year she returned on a Fulbright grant. Now a senior researcher at the Center for the Study of Islam and Society (PPIM), he says he benefited from lengthy discussions with her, replete with intellectual depth and empathy.

Anne was influential in arranging a prestigious college tour in the United States for Maria Ulfah and her husband in 1999 and again in 2016, and continues to conduct joint presentations with her. In November 2016, Maria Ulfah recited a passage from the Qur’an as part of an inauguration ceremony at an ethnomusicology conference in Washington, DC. And beneath photographs of reggae icon Bob Marley on the walls of the Ciputat recording studio, Anne cut those Arabic tracks with her IIQ confidante, who now seems convinced of the crucial role of documentation.

Anne has also enjoyed a longtime association with cultural activist Emha Ainun Nadjib, leader of the music ensemble Kiai Kanjeng. She has performed on her oud with the group more than a dozen times over the years, noting the “staying power” of the ensemble, which keeps up a vigorous schedule in the small towns of Java and beyond. She enjoys the improvisational atmosphere, with its mix of motivational speeches, humor, and music infused with spiritual meaning.

A life in music tends to be unpredictable. Sudden invitations often lead in new directions. But traces remain. After listening to Anne’s July 3, 2017, presentation in Jakarta, the director of the Graduate School at the Syarif Hidayatullah State Islamic University Jakarta spoke up. “I will support our students to do research in music,” declared Masykuri Abdillah. Now he wants to do his part to ensure that more Indonesians understand the value of music, beyond its power to entertain.