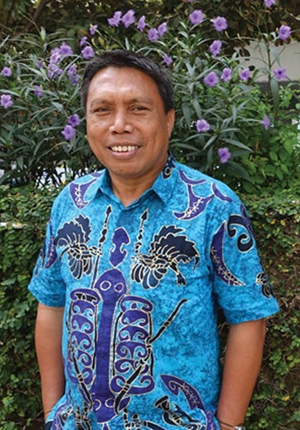 Rick completed his dissertation in 2014,producing a conservation blueprint atonce scholarly and practical. He also forged some strong transpacific bonds.

If you’re going to fall in love with a turtle, you might as well choose the biggest, fastest, and most ravenous creature around.

That’s what happened to Ricardo Tapilatu, the jovial marine biologist whose work to conserve the endangered Western Pacific leatherback turtle has captured hearts across Indonesia and America. The leatherback, known to swim more than 5,000 nautical miles all the way from West Papua to California, plays a pivotal role in marine ecology due to its insatiable appetite for jellyfish. This turtle won’t hesitate to deep dive for gelatinous, low-calorie snacks. Rather hefty at 2,000 pounds (around 900 kg), it builds momentum for long voyages with paddle-shaped flippers.

The 51-year-old scientist does share one trait with his favorite reptile: perseverance. Back in 2007, as a lecturer at the remote Manokwari branch of the State University of Papua, he didn’t think he had a prayer of winning a Fulbright award to work on his PhD. Coaxed by his family, he eventually filled out the application and met with success. So in 2008, he packed his bags for the University of Alabama, cheerfully introduced himself to his new Southern friends as “Rick,” and put in long hours at the lab and the library.

He traveled back and forth to Papua, testing his theories with field research. There, he groomed a team of young graduates to ensure that more turtle eggs would hatch safely under leafy shelters. Meanwhile, he huddled with scholars at turtle conferences in Australia, the United States, and Mexico. He combed over the data analysis. Ultimately, Rick completed his dissertation in 2014, producing a conservation blueprint at once scholarly and practical.

He also forged some strong transpacific bonds. In 2016, he invited University of Alabama graduate student Amy Bonka to visit some leatherback nesting sites on the beaches of Bird’s Head Peninsula in West Papua. A veteran of turtle studies in Mexico, she was dazzled by the scenery and the human warmth of the place. Rick’s circle of eight protégés “treated me like family,” she says. “It doesn’t take very long in interacting with Rick’s research team to understand the respect they have for Rick, or their love for the work they do—his team eats, sleeps and lives leatherback conservation.”

Such devotion could be crucial, given that the numbers of Western Pacific leatherback turtles have dropped by 80 percent over the last three generations, according to the National Oceanic and Atmospheric Administration in the United States. They are already extinct in Malaysia. And their counterparts, known as Eastern Pacific leatherbacks, are dwindling rapidly in Costa Rica and Mexico. The repercussions for the ecosystem are dire. “If we lose them, then there is no natural predator for the jellyfish,” warns Rick.

Extinction would affect not only Indonesia, but the whole planet. And so the impact of the Fulbright-funded research reaches far beyond Papua. “Without his local site-level research, this species conservation at the global level would be impossible,” attests Victor Nikijuluw, marine director at Conservation International Indonesia.

Like many love stories, this one also started on the beach. Rick’s parents introduced him to a peripatetic coastal life. With a mixed heritage spanning Larantuka, Ambon, and the Netherlands, his mother and father left Jakarta to work as civil servants for the Irian Barat administration after the territory ceased to be a Dutch colony. Assigned to the Bureau of Logistics (BULOG)—the unit responsible for food logistics and food security—the parents moved their growing family around Manokwari (where Rick was born), Jayapura, Fakfak, Wamena, and Sorong. As the eldest of four siblings, Rick led the irrepressible pack in spearfishing and frolicking on the sand.

The beaches were so enticing that the children were loath to return home for naps. After playing in the surf, they jumped into bed just before their parents returned to check on them. “We didn’t have time to wash our feet and dry off,” Rick recalls. Their sandy toes did not escape the notice of their father, who meted out punishment to little avail.

As a teenager in the early 1980s, Rick accompanied his mother to the market in Sorong. He was amazed to see an array of large turtle eggs, the size of billiard balls. He learned that these eggs were particularly prized as aphrodisiacs, given the turtles’ known stamina for long hours of copulation. When cooked, however, they bore no resemblance to hard-boiled chicken eggs. Instead, the insides turned slimy and aficionados would break the shell and slurp.

The sheer volume of the wares on display sparked Rick’s imagination. At that time, one wooden boat could fetch as many as 10,000 to 15,000 eggs per trip, leading him to wonder how many turtles might be out there in the wild. But it was not until 2004, when he was already working as the head of the marine laboratory at the State University of Papua, when he got the chance to observe a primary nesting site at Bird’s Head. “I was fascinated,” Rick recounts.

Over the years, though, he also learned that the beach is not the idyllic playground tucked away in his childhood memories. Protecting the leatherback hatchlings is hard work, due to a variety of ominous local conditions. His research team has to contend with feral pigs that emerge from nearby forests and rush to gobble the eggs. Predators also include dogs and monitor lizards. Crocodiles have been known to bite off the heads of female turtles.

And, due to climate change, sand temperatures are rising, leading to eggs getting cooked even before the embryos can develop.

Countering such problems requires the participation of local communities. For example, villagers can trap the pigs, dry the pork, and sell it in the market in Sorong. They can join patrols and ward off other predators. Yet, Rick and others concede that this process has been particularly challenging because local landowners have demanded large sums of money in exchange for conservationists’ getting access to the beaches. As elsewhere in Indonesia, decentralization in the post-Suharto period has often led to accelerated natural resource exploitation by local officials and landowners.

When villagers grew heated during discussions, Rick “didn’t lose hope. He always looked for solutions,” says William Geif Iwanggin, a 31-year-old marine science graduate and team member. Having studied under Rick at university, he remembered his lecturer as a strict disciplinarian, demanding punctuality and focus from his students. But after Rick returned from his arduous academic program in the United States, his protégés noticed that he seemed a bit more “humble,” and more willing to listen to others. The impasse at Bird’s Head was partly overcome in 2017 with the help of the Arkansas-based Walton Family Foundation, which made more funds available.

In addition to promoting hard science, Rick seizes opportunities to raise public awareness about the environment. In March 2017, Rick was a prime whistle-blower following a tragic event at the gorgeous island chain of Raja Ampat in West Papua, where the cruise ship Caledonian Sky rammed into a coral reef and damaged at least 13,000 square meters. (According to the environmental website Mongabay.com, the cruise liner apologized and pledged its cooperation to work with the Indonesian government toward a “fair and realistic” settlement.)

Rick also spoke with local reporters recently to publicize his discovery that leatherback eggs are not harmless aphrodisiacs but actually bad for human health, due to deposits of mercury, arsenic, and other harmful elements.

Back in the United States, Rick enjoyed a regular healthy diet of fresh tuna, thanks to the kindness of his thesis adviser, Thane Wibbels. The University of Alabama professor made sure to bring him fish every week, in addition to advising him on his research and lending him lab equipment. Rick also developed a fondness for Mexican tacos, and enjoyed playing American-style football, a sport that initially baffled him.

In August 2017, he returned to the United States for another year-long chapter in his career. This time, as a Fulbright Visiting Scholar, Rick is looking beyond his beloved turtles and thinking more broadly about the health of the oceans. Based in the Arlington, Virginia office of Conservation International, Rick is working on a conceptual framework to help Indonesia conform to the Ocean Health Index, a global measure that relies on such parameters as biodiversity, pollution, and livelihood opportunities.