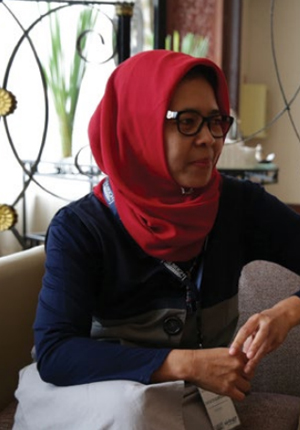 Her encounters with divergent viewpoints include analysis of liberation theology in contemporary Latin America, Sufi mysticism in medieval Spain, and Catholic  mysticism in medieval Germany. To cap her expertise in comparative religion, Syafa became the first Muslim to emerge with a doctorate from the Catholic Theological Union in Chicago in 2008—and remarkably, earned another doctorate simultaneously at the Lutheran School of Theology at Chicago.

Walking together with 15,000 Buddhist monks, nuns, and lay-believers, Syafaatun Almirzanah joined a moonlight procession from the ninth-century Mendut temple to the pristine stupas of Borobudur.

It was not the first time the devout Muslim scholar had made this three-kilometer journey in Central Java, marking the anniversary of the Buddha’s first sermon in India. In fact, she had often engaged in discussions with Sri Pannavaro Mahathera, a senior monk at the monastery in Mendut, comparing the precepts of Buddhism and Islam. Such talks inspired a series of local television programs, which also covered other religions such as Hinduism and Catholicism.

But this year, Syafa brought along a newcomer to Mendut. Also joining the July 8, 2017 procession was R. Scott Appleby, a University of Notre Dame history professor, who studies the role of global religions in conflict and peacemaking. Calling the procession “a highlight of my life,” he points to Syafa’s sincere commitment to interfaith understanding. She brings “a willingness to listen and learn, with great respect for the integrity of the traditions and their practitioners,” he observes. “This is absolutely crucial to her influence.”

For the 54-year-old scholar, tolerance began at home. Syafa had firsthand experience of many shades of Islam. Her father’s side of the family sprung from Nahdlatul Ulama, while her mother’s side favored Masyumi. While raising the family in Purwokerto, Central Java, her parents were united in encouraging academic achievement without discriminating between sons and daughters. As a child, she was drilled in English, Arabic, and knowledge of the Qur’an. At age 12, Syafa was enrolled in a modern pesantren in Pabelan, Central Java, founded by an alumnus of Pondok Modern Darussalam Gontor, a leading Islamic boarding school noted for its spirit of broad-mindedness and academic inquiry.

These days, one of Syafa’s favorite quotations comes from the Harper Lee novel, To Kill a Mockingbird, where Atticus says, “You never really understand a person until you consider things from his point of view . . . until you climb into his skin and walk around in it.”

By that measure, she has logged great distances. Her encounters with divergent viewpoints include analysis of liberation theology in contemporary Latin America, Sufi mysticism in medieval Spain, and Catholic mysticism in medieval Germany. To cap her expertise in comparative religion, Syafa became the first Muslim to emerge with a doctorate from the Catholic Theological Union in Chicago in 2008—and remarkably, earned another doctorate simultaneously at the Lutheran School of Theology at Chicago.

One of the main insights of her work in comparative mysticism is the role of humility in fostering interfaith understanding. Both the Sufi mystic Ibn ʿArabī and the German mystic Meister Eckhart taught that God lies beyond human comprehension. So, while each religion may assert certain ideas about God, believers should remain humble in acknowledging the vast range of interpretations involved in worship. “I think you can have a dialogue if you have humility. If you don’t have that, you will not learn anything,” says Syafa, who teaches at the Sunan Kalijaga State Islamic University (UIN) in Yogyakarta and conducts research at the Center for Bioethics and Medical Humanities at the University of Gadjah Mada (UGM).

Rather than regard mystics as some sort of eccentric spiritual fringe, she joins other scholars in perceiving “a profound relevancy to the efforts of mainstream believers to integrate the challenges of pluralism into their own religious identities.”

Such ideas could easily be accepted in Chicago, where Syafa grew accustomed to a cosmopolitan circle of thinkers. She also encountered a variety of liberal viewpoints in Washington, DC, during a teaching stint at Georgetown University in 2011–2012.

But her willingness to spend a year as a Fulbright Scholar-in-Residence at Eastern Mennonite University in rural Harrisonburg, Virginia, in 2016–2017 led to a different experience altogether.

There, she encountered students raised in a more conservative environment. She needed to emphasize that understanding other religions did not imply a move to convert. It meant moving away from stereotypes, and diving more deeply into the study of their own religious traditions. Within Christianity, for example, she explained that there were multiple interpretations of the biblical account of Eve being created from Adam’s rib.

Muslims on campus were scarce. Syafa answered a volley of questions about her choice to wear a head scarf, and about Muslim attitudes toward polygamy and the treatment of women. She showed videos on Iran, Saudi Arabia, and Indonesia that displayed variations in Islamic practice. And she encouraged students to take a more active approach to learning, referring them to a nearby Turkish mosque as well as a Buddhist temple to observe different methods of worship.

She did have a few students whose parents feared they would be “contaminated” by such outings, Syafa recalls. But she persisted, and asked them to write about “your encounter with another religion” for a final paper. On occasion, she also advised students to embrace the “spirituality of reconciliation,” urging forgiveness in a family context.

The Fulbright grant allowed her to travel to other campuses, as well. In February 2017, for example, she visited Wake Forest University in North Carolina for classroom discussions and two public lectures: one on interreligious cooperation and another on Islamic bioethics (a topic that she is currently researching for a book). “All the talks were very well-received and we had vivid discussions about issues such as organ transplants and IVF [in vitro fertilization],” recalls Nelly van Doorn-Harder, a professor of Islamic Studies.

Syafa returned to Indonesia in June 2017. In her home country, she is particularly known for her critical edge in discussions about Islam. For example, in her 2014 book When Mecca Becomes Las Vegas: Religion, Politics and Ideology, she deplores the expansion of pilgrimage infrastructure at the expense of historical sites and deeper spiritual fulfillment. In public forums and newspaper op-eds, she speaks out against hate speech aimed at non-Muslims. “She is influential among her students and lecturers in her field,” says philosopher M. Amin Abdullah, former rector of UIN Sunan Kalijaga. Though outnumbered by male colleagues, she has secured a respected place as a woman, he adds.

“She tries to show that the imperative of being Muslim lies not only in prayer, but putting it into action—especially in dealing with non-Muslims in daily life,” observes Sanata Dharma University theology professor Heru Prakosa, a Jesuit priest who wrote his PhD dissertation on the Iranian Sunni Muslim theologian Fakhruddin Razi. The Jesuit has invited Syafa several times to speak to candidates for priesthood about comparative mysticism, among other topics. She has also invited him to address students in her classrooms.

Fresh from her latest stint in the United States, Syafa says that she is still mulling what the “Real America” might be. Certainly, for her, it remains a land of intriguing coexistence. For example, she managed to spend six days during the Ramadan fasting month in Las Vegas (jumping from the metaphor used in her 2014 book title to the reality on the ground). “People say that Las Vegas is just casinos and gambling, but it’s not!” she says. Syafaatun was intrigued by the rapid growth of Pentecostal churches in the area, as well as the substantial Muslim presence—with at least six mosques that count an estimated 12,000 followers. During the trip, she marveled at how some Muslims managed to make an honest living in the midst of such garish excess.

In Las Vegas, she also noted the tolerance shown to people who might otherwise simply be branded “sinners.” With a little help from Fulbright, it was another chance to relish the diverse spectrum of humanity.