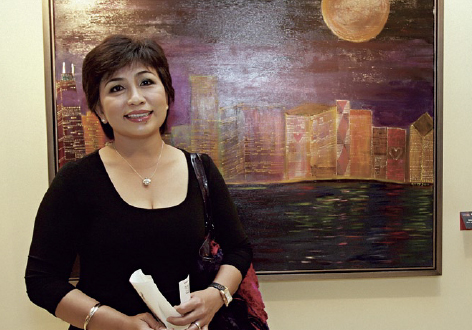 Knowledge Has No Walls

Etty Indriati is a common name in Java, even across Indonesia. However, this Etty is unique. She graduated from the Faculty of Dentistry at Gadjah Mada University in Yogyakarta and received a Fulbright scholarship to undertake doctoral studies at the University of Chicago. She is proud of this achievement, as she thinks of the Fulbright as being awarded to only “the brightest of the bright.”

“I was told to study soil science as part of my studies in forensic science,” she said. “It was then that I realized that knowledge has no walls. It is really sad to see people in Indonesia put into boxes in the scientific world. From high school on, it is as if their fate is pre-determined: the physical sciences, the social sciences, or language and culture.”

In fact, according to this woman who was born in Solo in 1963, all sciences are related to each other, not separate. She has proved this herself. Starting from her profession as a dentist, she became a lecturer and researcher in forensics at the university’s Faculty of Medicine then a paleontologist and a specialist in physical anthropometry. In the event of a plane crash, tsunami, fire or other disaster that claims many lives, Etty has the important task of identifying the remains of unknown victims.

Etty’s accomplishments did not stop with her success in the sciences. At age 42, she was fortified by becoming a professor. On her 45th birthday, she planted 45,000 trees on the slopes of Mount Sindoro. At the age of 48, she showcased her painting skills with a solo exhibition at the Ritz-Carlton Hotel in Jakarta. In this grand exhibition, Etty presented her impressionist works of some of the world’s great cities, including Chicago, Moscow, London, Paris, Singapore, Nairobi and many others.

“A multicultural experience enlarges humanity,” said Etty, based on her own experience. She married an American and has been blessed with two children. Etty thinks local wisdom and examples of multicultural life are a major attraction for American scholars who come to Indonesia. “My husband, John, was accepted as a son-in-law by my mother because he was polite and well-mannered and knew how to adapt to the social etiquette here,” she said.

Etty is often forced to leave her husband and two children in Jakarta because she teaches at the Faculty of Medicine at Gadjah Mada University. When she is alone in Yogyakarta, she paints and writes novels and popular books that have made her well-known as a multitalented scholar.

What are Etty’s suggestions regarding the relationship between Indonesia and the United States? “The more, the better,” she said. “Fulbright can play a greater role here by increasing exchanges participants between the two countries.” Etty is often invited to teach at universities in the United States, as well as to publish her research there.

With her enthusiastic spirit, Etty is known not only as a physical anthropometry professor, a forensics expert, a painter, a novelist, and a dentist; she is also recognized as an environmental activist and a philanthropist. A gifted Fulbright alumna famous for her generous contributions to society, Etty has donated hundreds of wheelchairs to underprivileged children.

This article appears from the book of Across the Archipelago, from Sea to Shining Sea Commemorating the 60/20 Anniversary of Fulbright and AMINEF (Page 109– 111) published in 2012.