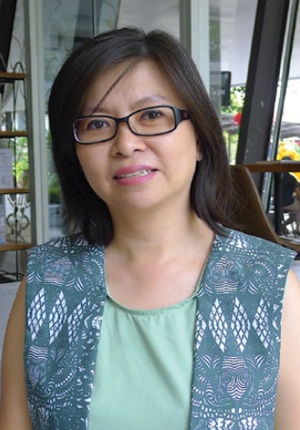 [In Washington, DC], Evi focused on interviewing youth in two troubled wards where  drug deals, murders, and mental illness wreaked havoc on family life… She was struck by how many American teenagers and young adults in their twenties ended up on the streets, after being shunted through an ineffective foster care system.

In a quiet alley hemming the Ciliwung River, an editorial meeting begins.

There are no desks, no computers—just an orange tarp spread over raw concrete. Sitting in a circle, seasoned editor Evi Mariani fields questions in a gentle voice. She knows this particular group will need extra reassurance to get on the right track.

Their aim: to go online and provide fresh insight into Jakarta communities abruptly dislocated by development projects. “Should we be writing about the origins of the kampong, or telling stories about the people who now live in the kampong?” asks a recruit. “Usually a journalist asks about everything, and then chooses what to include,” explains 41-year-old Evi. “Get as much information as you can, first, and later we can decide what we find to be the most interesting.”

They don’t mind starting from the ground up. These novice reporters mostly make a living as vendors, motorcycle drivers, and security guards, and have all seen their neighborhoods riven by resettlement controversies. “I am really happy to see that someone from the outside wants to help us,” says Haris, who sells plastic watches in nearby Fatahillah Square.

During Evi’s tenure as a reporter and city editor at the Jakarta Post, she relished her role in shaping coverage of urban evictions. Yet she also believes that individuals from affected communities should play a greater role in crafting the narrative. If she helps them to create their own website, they might have a shot at dissuading the mainstream media—and thus, the public—from assuming that evictions only affect an underclass of thugs, prostitutes, and drug addicts. “The journalist we trust is mbak [sister] Evi,” says Gugun Muhammad, advocacy coordinator for the Urban Poor Consortium, an NGO supporter of this initiative. “She sees that poor people are not garbage.”

The July meeting brought back vivid memories of Evi’s experiences in the United States, where she traveled in 2011–2012 on a Hubert H. Humphrey Fellowship Program for mid-career professionals. The fellowship falls under the umbrella of programs linked to Fulbright. In the batch of ten fellows, she was the only one to volunteer for a four-month internship at Street Sense, a Washington, DC-based newspaper devoted to exploring the dynamics of homelessness. The editors were generous with contacts and encouraged her to write.

There, Evi focused on interviewing youth in two troubled wards where drug deals, murders, and mental illness wreaked havoc on family life. Despite Evi’s far more sheltered upbringing in Bandung, West Java—where she attended strict Catholic schools—she offered a sympathetic ear. She was struck by how many American teenagers and young adults in their twenties ended up on the streets, after being shunted through an ineffective foster care system. “I talked with three or four girls, who were 16 and 17 years old. During foster care, they were moved around to 12 different houses. They complained that other girls were mean, people stole their belongings, and the places were filthy,” Evi recalls.

Those reporting experiences brought tangible confirmation of an uncomfortable truth. “Inequality is everywhere. It’s a global issue. And I really believe that the press should be active in narrowing the inequality,” she maintains. That’s another reason she chose to include an ethics course as part of her academic work at the Philip Merrill College of Journalism at the University of Maryland.

Evi also had pragmatic reasons in applying for the Humphrey Fellowship. “I needed some leverage in my career,” she recalls. Even though she already had a master’s degree in urban studies from the Netherlands, she noticed that other newsroom colleagues who had moved up the ladder had completed overseas journalism courses and internships. In fact, the Jakarta Post has been one of the most steadfast allies of the Humphrey program, with editors convinced of its merit in polishing English language skills and providing international exposure. This paper is one of the few Indonesian media outlets that disburse salaries and hold jobs during the fellow’s stint overseas.

In Evi’s case, the Jakarta Post also gained valuable knowledge on how to handle the difficult transition from being a print dinosaur to becoming a nimble media outlet competing for online readers. “She became more aware, not only about the problems that newspapers are facing with the onslaught of digital media, but also the solutions,” observes Endy Bayuni, editor-in-chief of the Jakarta Post, who has known Evi since she joined the paper as cub reporter in 2003 and watched her evolve into a feisty editor. He credits Evi with putting together an effective flowchart for the new online newsroom. To maximize human resources, Evi recalls her sustained efforts to integrate the reporters who were previously segregated into print and online teams.

However, Evi readily concedes that she did not enter the United States with such a gung-ho approach to digital media. At that time, she was still a firm believer that quality journalism, including investigative reporting, was best showcased in print. But a course in multimedia journalism and an additional internship at the Washington Post changed her mind. She was impressed by the editors’ “upbeat” approach to the digital landscape, and paid attention to how they transformed the interior design of the newsroom to accommodate the news flow. “The Washington Post did not compromise on quality,” says Evi. “Clearly, digital was the future.”

Upon her return, Evi also worked closely with younger colleagues at the Jakarta Post. “She always pushed us to think further and dig deeper in every subject,” observes reporter Corry Elyda. Even when the material gathered from the field seemed lackluster, Evi brainstormed to find a significant angle. In career development, she has also been a mentor. “She encouraged me to move to other desks, so I could get broader perspectives. She also supported me to study again,” the young reporter adds.

Five years after the Humphrey Fellowship, and after assisting the Jakarta Post with its transition, Evi decided to make a big transition in her own career. In mid2017, she left the newspaper and joined a small team to launch Indonesia’s version of The Conversation, a website that started in Australia, and which aims to promote more well-informed debate in the public sphere. The online portal spurs academics to write for general audiences on their areas of expertise, including science, public health, the environment, and urban planning. Evi will be editing in both Indonesian and English.

Ideally, clarity should not be compromised by the complexity of the topics. “The challenge is to edit so that an educated 16-year-old can understand the piece,” she says, in her new avatar as politics and society editor. Meanwhile, in a volunteer capacity, she is still assisting those novice reporters in creating their own website on urban dislocation.

True to her interests, at The Conversation Evi is hoping to showcase some of the debate surrounding major Jakarta development projects, such as the Giant Sea Wall, a 32-kilometer-wide dike aimed at improving flood control in Jakarta. While Evi says she is not personally convinced that the multibillion dollar megaproject is the correct response to the capital’s watery woes, she wishes to spotlight the views of scientists who are both pro and contra.

Political polarization over urban development has been particularly harsh in Jakarta lately, dividing friends and former allies. Yet Evi continues to believe that a healthy debate, informed by science, remains possible in Indonesia. She has long been intrigued by contrasting viewpoints. For her original thesis project during her undergraduate studies in the 1990s at the University of Gadjah Mada (UGM) in Yogyakarta, she attempted to analyze the divergent editorials published in four different newspapers from the 1950s. (That brief turned out to be a little too ambitious, so she narrowed her focus.)

For his part, urban poor advocate Gugun knows that Evi’s background is different from that of the recruits sitting cross-legged on the orange tarp. But he doesn’t care. What counts, says Gugun, is her commitment. “Mbak Evi wants to reach out and help,” he says. “There are not many journalists like that.”