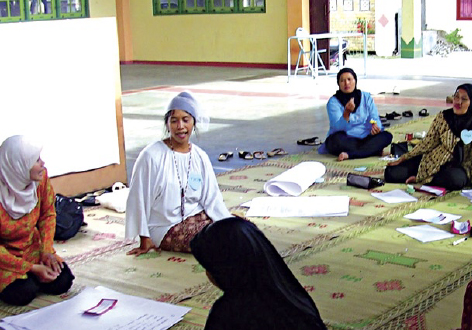 Sharing the Stage for Peace

Farsijana Adeney-Risakotta, a Fulbright scholar in the Interfaith Community Action program, is married to an American, Bernard T. Adeney. She acknowledges that she has learned a lot from Americans, as they are especially strong in volunteerism. “Every citizen there is encouraged to give some time to volunteer work. Such contributions to charity are eligible for tax deductions. If this could be implemented in Indonesia, it would be very good,” she said.

A graduate of SMA Negeri 1 (state high school 1) in Yogyakarta, she holds a doctorate from Radboud University in Nijmegen, The Netherlands. For her Fulbright scholarship in 2007 she went to Barnard College at Columbia University in New York. One of the most important lessons from America that Farsijana has applied in Indonesia is encouraging her students to ask questions, something that is not yet common practice for students in Indonesia. “I will remember you, if you like to ask questions,” is her motto

At Barnard College, a student once asked her, “How can you explain that the violence occurring now is rooted in the past?” Farsijana explained that there is a collective memory passed on from generation to generation. “Some of the movements of the past have been continued through customs and culture, including dance. Some of these collective memories can be used to stimulate enthusiasm and actions that are taken today,” she said.

Positive aspects from the past can be brought to life in order to create positive events in the present. This shows in the way that communities resolve conflicts that arise in their everyday lives. The old values of togetherness, diversity, equality, and unity should be passed on to the next generation in a way that connects with the audience.

Farsijana and her husband live in an Islamic environment. Their house was named “Tali Rasa” (emotional ties) with a strong enthusiasm for creating peace. “This is where we dream and have discussions with students, activists and neighbors. They can try my food, because I like to cook; they can organize exhibitions and cultural activities, since children and young people practice dance here every Saturday. I also dance with them. Then we perform and tour with other groups. One of the performances covered by Kompas daily was entitled “Sharing the Stage for Peace.”

She has a story about her experiences in establishing harmony between religions. “In New York, I visited Catholic Christian and Jewish communities that hold joint activities at least twice a year. They picnic and eat together at Thanksgiving. These efforts to safeguard unity at the grassroots level are undertaken in order to maintain peace in the communities where they live.

“A year later, I returned to New York to facilitate a meeting of grassroots activists from Indonesia and the United States to reflect on the influence of the majority and minority in initiating efforts to maintain peace in their respective areas. This activity was carried out at the Union Theological Seminary in New York in 2008, and a similar activity was conducted in Indonesia in 2009.

“The aim of the meetings was to encourage grassroots activists to actively promote peace between religions. Activities in Indonesia were centered around the Indonesian Consortium of Religious Studies at University of Gadjah Mada, where I teach. The focus was on the role of women in peace in Indonesia. The openness of Fulbright to providing space for the role of religion in maintaining world peace can indeed be seen directly through these programs.

“As the regional secretary for the Indonesian Women’s Coalition in Yogyakarta, I facilitated the establishment of the Women’s Hall in Sedayu. The membership is made up of both Christians and Muslims. They meet monthly to discuss policies at the village level that impact women. The purpose of all these activities is to encourage the women to understand their rights and obligations, including to maintain peace without losing their determination to keep fighting for justice and democracy.”

Farsijana said, “As an alumna of the Fulbright program, I want to encourage America to pay greater attention to the interests of the countries they are helping so that the countries are able to take off on their own.”

Apart from that, Farsijana would also be pleased if America would train the younger generation of Indonesians to develop their skills in managing natural resources. “For example, by improving environmental education and appropriate technology for the middle and lower classes,” she said.

This article appears from the book of Across the Archipelago, from Sea to Shining Sea Commemorating the 60/20 Anniversary of Fulbright and AMINEF (Page 112– 115) published in 2012.