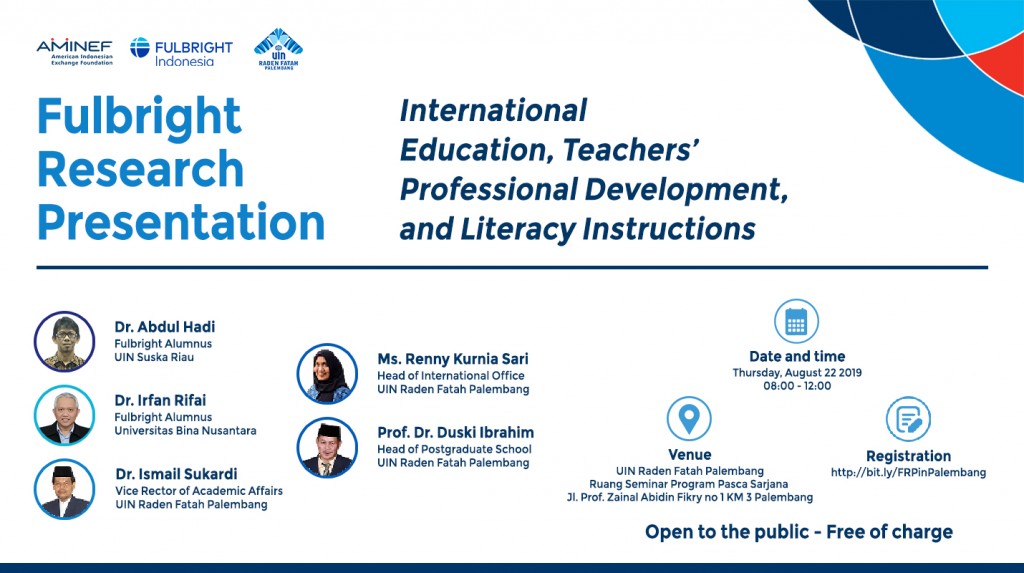 This event is free and open to the public.

Dr. Hadi is a senior lecturer of English education at Universitas Islam Negeri Sultan Syarif Kasim Riau. He is a two-time Fulbright Scholars; the first was in 2006 when he earned his master’s degree in TESL from the University of Arizona and the second one was in 2018 as a Fulbright Visiting Scholar at the University of Michigan where he carried out a research on the role of religion and how it affects pre-service English teacher education in Muslim-majority countries.

Dr. Hadi earned his doctorate from the University of Sydney in 2015. He has presented his work both nationally and internationally and has published in peer-reviewed Journals such as TEFLIN Journal and The Qualitative Report (in press).

Dr. Irfan is a faculty member at the English department of Binus University. He was a 2015 Fulbright Doctoral Degree grantee in reading and literacy at the Ohio State University. He earned his master’s degree in leadership and management in Education from Flinders University, Australia and a bachelor’s degree in English language teaching from Universitas Negeri Semarang. His research interest is related to educational drama, book talk, reading and literacy instructions.

A summary of Dr. Irfan’s research entitled “Students’ and teachers’ ways of making meaning/understanding religious and literary texts through drama”: The research investigated students’ talk and collaboration to make meaning / understand stories from literary and religious texts by using drama strategies. Through the perspective of sociocultural discourse analysis, the researcher analyzed students’ and teachers’ talk to construct his understanding of how drama strategies influenced the interactions between students and teachers. The research took place in a fifth grade Language Arts class and a second grade religious class of an Islamic school in the United States. In these classes, three drama strategies were used in the language arts class and performance storytelling was used in the other class. The research revealed the distinctive ways that students and teachers co-constructed meaning from both types of texts.

The event will be joined by three researchers from UIN Raden Fatah Palembang who will present their respective research:

1. Dr. Ismail Sukardi (Vice-Rector of Academic Affairs) and his research entitled: “Internationalization of State Islamic University in Indonesia: Its Concept, Form, and Effect for University Recognition”

This research is co-authored with Renny Kurnia Sari, M.Pd. (Head of International Office).

A summary of the research: Maqâsid sharî’ah are the objectives or purposes behind Islamic rulings. The maqâsid ash-sharî’ah can be preserved or carried out by two sides of direction, namely: by side of existence (min jânib al-wujûd), in sense to realize the maslahah (something benefit); or by side of non-being (min jânib al-‘adam), in sense to reject or remove the mafsadah (something harmful). Recently, Muslim scholars developed the concept into familiar economic terminology, such as social assistance, economic development, the flow of money, wellbeing of society, and diminishing the difference between economic levels. This development enables utilizing maqâsid sharî’ah to encourage economic growth, which much-needed in most countries with a Muslim majority. In a brief word, maqâsid sharî’ah urges Muslims to dominate economic affair in all fields. But in fact, Malay Muslims are still left behind.

To ensure a place, please register at http://bit.ly/FRPinPalembang