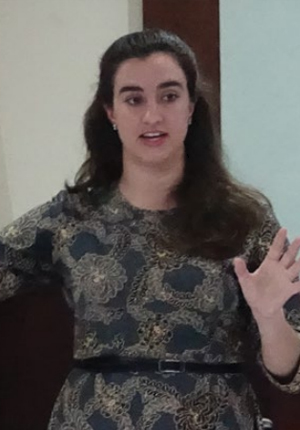 “I love the energy of my students, which sometimes does need some reining in, but honestly is the reason I show up to work every day,” she wrote in a blog that chronicled her three years in Indonesia

Instead of condemning students to a dry grammar lesson on the conditional tense, English teacher Grace Wivell had a better idea.

She cranked up the volume of the song “Perfect” by British rocker Emma Blackery and suggested that the class make a video. The gleeful teenagers in Malang, East Java, scribbled signs to wave at the camera, such as “I wish I were a zombie,” and “I wish I were brave.” They also wrote about their strengths, as the song underscores self-acceptance. A grinning student in glasses hoisted the message “I am perfectly imperfect.”

Grace edited the video and posted it on YouTube. In a flash, the rock star tweeted the link to her fans across Europe, thrilling the students in East Java.

That 2015 experience at the SMAN 10 (Public High School 10) in Malang was just another reminder of Grace’s uncanny ability to harness enthusiasm. “I love the energy of my students, which sometimes does need some reining in, but honestly is the reason I show up to work every day,” she wrote in a blog that chronicled her three years in Indonesia—first, as a teacher in Malang, then in Gorontalo, Sulawesi, and finally as a Jakartabased coordinator of the 2016–2017 batch of US Fulbright English Teaching Assistants (ETAs) dispatched across the archipelago by the American Indonesian Exchange Foundation (AMINEF).

It was an extended stint, leaving a long trail of appreciation. In Sulawesi, an Indonesian colleague who co-taught English alongside Grace credited her with reviving a sense of fun and engagement in the classroom. “Before, I used to go straight to the lesson plan. But now I try to combine the lessons with interesting games that have some relevance to the material we are teaching,” says Miswarty Ayub, who teaches at the Madrasah Aliyah Negeri 1 (National Islamic School 1) in Gorontalo.

Outside the classroom, Grace’s unstinting support for rookie ETAs was also praised. Not just in times of difficulty, but also in sharing the sense of discovery that comes with a new posting. Julius Tsai, a former ETA in Magelang, Central Java, recalls a favorite moment when Grace turned up for a site visit and they sat in a grassy plaza to eat kupat tahu, a sweet and garlicky tofu specialty. He was struck by her curiosity to “to learn about the rich (and delicious) parts of Indonesian culture.”

She was also the kind of teacher who would bake apple crisps for Indonesian 10th-graders after parsing a story on Johnny Appleseed, recalls Malangbased English teacher Tri Luhpalupi. On another occasion, Grace bought watermelons (instead of pumpkins) for a Halloween event, and taught the students how to carve them.

She tried to make the best of small adversities in the countryside, such as electricity shortages. A black-out “forces you to unplug, slow down, to step outside. It is endearing in that way,” she wrote in her blog.

Grace was an emissary from the American rural heartland. The 25-yearold teacher grew up on a series of dairy farms, with her family settling in the upstate New York hamlet of Deansboro, population 1,300. During high school, she opted for three years of homeschooling to give herself more time to participate in 4-H, a network of youth organizations founded in 1902 that offers activities related to agriculture and livestock, among other topics. In a series of Dairy Quiz Bowls and Skill-a-Thons, she waltzed through quizzes on cows, judged the quality of hay, and paraded goats.

One of the main attractions was the opportunity to travel to places like Kentucky and Pennsylvania for competitions. Aside from learning a variety of farming practices in the United States, she also interacted with some international experts from Russia, Germany, and Argentina. It was the first glimmer of a wider world. A beloved great-aunt, who once served as a nurse in the US Navy, also recounted tales of her travels in South Korea and Eastern Europe.

In her teenage years, Grace didn’t have much luck in learning foreign languages. She dabbled in French, German, and Latin, but the words didn’t stick. Finally, when she got to Ithaca College, she encountered a Spanish teacher who changed her attitude to learning. He urged his pupils to watch films, listen to music, read newspaper articles, and find other creative ways to absorb new vocabulary. His message: stop being scared, and do it the way it works for you.

As an English major and a budding poet, Grace applied those ideas to teaching English as a foreign language in the United States. Her students in 2014 included refugees from North Korea, along with young people from Russia, Spain, and China. She also participated in a teacher certification program for grades 7–12. Professors noted that she was a hard worker, completing hundreds of hours’ service in local schools and community centers, in excess of the requirements.

Ultimately, Grace carried her Spanish teacher’s credo to Indonesia, both in her own efforts to learn Indonesian on the ground and teach English in Malang and Gorontalo. “It was a matter of not being scared, and not worrying,” she says. “Just talk, and try to communicate.”

She arrived in Indonesia with far more teaching experience than most of the other ETAs. While all of those selected have distinguished themselves in various ways, including leadership and community service, a degree in teaching is not a prerequisite. Mindful of their need for quick and practical grounding, Grace worked to revamp the orientation session and midyear enrichment conference in her role as ETA coordinator.

For example, she passed on some techniques in classroom management. It can be as simple as clapping to get students’ attention, or saying “all eyes on me.” In an ambitious initiative, she and an American teacher posted in Kalimantan canvassed alumni of the ETA program and compiled a large database of lessons from years past. Easy access came via Google Drive. “I think this is one of the most valuable resources that ETAs have,” says Mackenzie Findlay, who worked together with Grace on the project after she completed her posting in Palangkaraya, Central Kalimantan, moving on to teach a second year in Kendari in Southeast Sulawesi. “Along with the other ETAs, I was very grateful to have it as we prepared our lessons throughout the year.”

In some ways, the typical ETA’s lack of experience and Indonesian-language skills can also be seen as an advantage, especially during extracurricular activities. When students see that the teacher is “perfectly imperfect” (as in the tweeted video), they can also loosen up. It may reduce the fear factor in learning English when the student can sense that the ETA is also straining to learn Indonesian.

Reflecting on interactions with students who initially seemed daunted, other ETAs often told Grace, “Suddenly they can speak English when they want to teach me Indonesian!” That prompted an idea for a new series of videos, called “The Bahasa Project,” in which Grace asked her students to take words like rajin and sopan and provide the meaning in English by acting out little scripts. Grace hopes that future ETAs will continue along this line.

Back in the classroom, Grace also made an effort to introduce diversity. As a white American, she knew that she was just what her students anticipated. So she tried to broaden their outlook by discussing the legacy of inspiring leaders during Black History month, and by assigning Native American folktales. The students seemed to warm to animal characters that acted like people. “‘Rainbow Crow’ is always a hit,” she recalls.

Grace decided to pursue graduate studies in applied linguistics at Stony Brook University in New York in 2017. She still wants to be a teacher. Before her own classes started in August, she could be found at the Waterville Public Library, arranging a display of handwoven textiles she had collected from East Nusa Tenggara, Sumatra, Sulawesi, and Java. In the classic Fulbright mold of cultural ambassador, she pledges to keep finding ways to “share my experience, so it doesn’t just benefit me.”