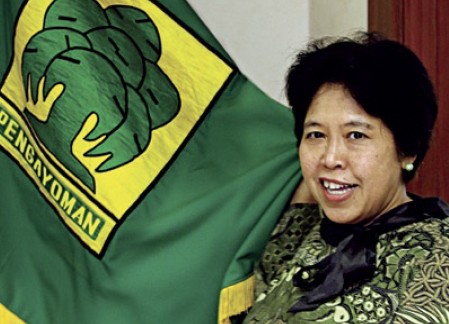 Learning Human Rights From Behind Bars

“One day I was invited to lunch at a prison in the United States. Ah, what’s so special about that, I thought. It turned out that they were served full meals. Starting from soup, salad and main course, to ice cream and fruit desserts, all were available. Oh, it was delicious. Better than the lunch of a Fulbright student,” said Harkristuti Harkrisnowo, director-general for Human Rights at the Ministry of Justice and Human Rights, Republic of Indonesia.

“The Fulbright scholarship is prestigious. It’s hard to get and provides little money,” she said, laughing. Born in Bogor in 1956, she is usually called Mrs. Director-General or Mrs. Tuti. She received a Fulbright scholarship after graduating from the Faculty of Law at the University of Indonesia. “I chose to live and study in a small town, Huntsville, Texas, which, as it turns out, had five prisons.” There, at Sam Houston State University, she studied criminology and could visit jail after jail to see how the knowledge gained in the classroom is practiced in the field.

From these experiences of visiting jails she acquired the knowledge that brought her to occupy the post of Director-General for Human Rights. Tuti is known as the official who pays attention to prison conditions throughout the country. “It’s very sad,” she said. “The prison capacity throughout Indonesia is only 90,000 people, while the number of inmates and prisoners is about 135,000 people.” According to her studies, a prison should not be 100 percent full. “To have optimal protection and attention for inmates, maximum capacity should only be 90 percent,” said Tuti.

She came to like living in the small town of Huntsville because of the opportunities to visit and observe the five prisons there. The detention facilities in the United States seemed indeed very good. Inmates who wanted to undergo cosmetic surgery, for example, to change their facial profile, could get free assistance at the expense of the state.

There is also a striking difference in the number of prisoners compared to the population. America, with about 300 million people, has 2.2 million prisoners and detainees scattered throughout various cities. While Indonesia, with 230 million, only has about 135,000 prisoners and detainees. “The ratio is very low, but the conditions are very sad,” said Tuti.

While studying in Texas, what was most memorable to her? “One afternoon, in front of a bank, not far from the campus, I found a woman in tears. Apparently, she was from Indonesia. She did not know how to get back to her apartment, and did not dare ask, even though the apartment was only 500 meters from where she stood,” said Tuti. This shocking experience made her realize that many Indonesian people are not prepared to live in another country because they lack mastery of the language. “Fulbright scholarship recipients are, of course, selected so that they will not experience anything like that,” she said.

When Tuti went to Huntsville, she felt that the exchange of scholars in the field of law was still very rare. “Most people sent to Texas were agricultural extension candidates. Among them were many who did not have very good English. Perhaps because their daily work was in the countryside,” she said

The greatest lesson Tuti learned by going to America was to live independently. Her departure to Texas with a Fulbright scholarship was her first trip abroad. She still remembers that on the last night before her departure, she asked to be taught how to fry an egg. “For the first time, my maid taught me to make an egg sunny-side up,” she said. But after living in America, Tuti was used to doing things for herself, such as washing, cooking, and shopping.

In Indonesia, things like this were guaranteed to be taken care of by her family. “But it can also be the other way around. When I became a student in America, I got my own office with telephone and Internet facilities. When I returned home and was appointed assistant dean, my office was small and shared with the lecturers. Never mind Internet facilities, there wasn’t even a telephone,” she said.

This article appears from the book of Across the Archipelago, from Sea to Shining Sea Commemorating the 60/20 Anniversary of Fulbright and AMINEF (Page 116– 118) published in 2012.