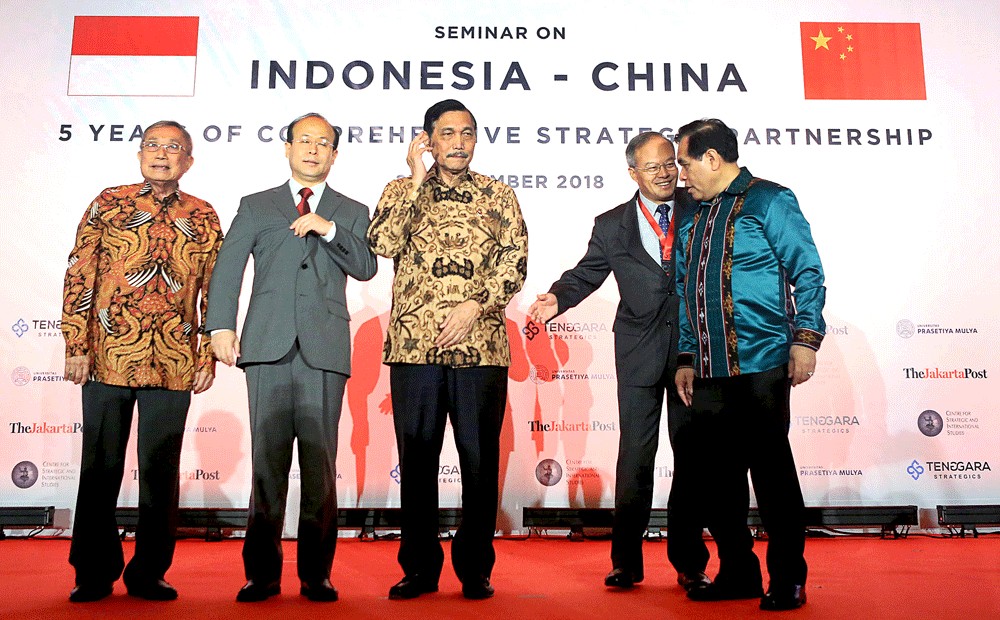 Fabulous five: Centre for Strategic and International Studies cofounder Jusuf Wanandi (from left to right) smiles on stage while standing next to Chinese Ambassador to Indonesia Xiao Qian, Coordinating Maritime Affairs Minister Luhut Pandjaitan, former Chinese ambassador to Indonesia Lan Lijun and Indonesian Ambassador to China Djauhari Oratmangun during the opening of a seminar on the fifth anniversary of the Indonesia-China Comprehensive Strategic Partnership in Jakarta. (The Jakarta Post/Seto Wardhana)

Researcher at the Centre for Strategic and International Studies (CSIS)

The latest encroachment on Indonesian waters by Chinese fishing vessels and the Chinese coast guard several days ago highlights a fundamental reality: China could ignore Indonesia’s interests and concerns because it can.

Jakarta, after all, has been singing the same tune every time there is a maritime incident involving China, combining strong diplomatic protests with some form of military posturing.

Last week, the Foreign Ministry summoned the Chinese ambassador and conveyed a strong protest note. Officials then publicly reasserted the illegality of the “nine-dash line” and “historic fishing rights”. The security establishment then deployed warships and patrol vessels in the area.

There is nothing wrong with such strong responses. But we have employed them before in recent years. In 2016, following a similar incident involving Chinese vessels, we even added a Cabinet meeting led by President Joko “Jokowi” Widodo aboard a naval warship. Yet, Chinese illegal maritime encroachments have recurred.

We cannot expect a different outcome by doing the same things. We need a new strategy to deal with China.

First, the government should be clear that managing China is Indonesia’s toughest and most important strategic challenge.

Unless the government deals with China comprehensively, coherently and consistently, Indonesia will fumble in the age of great power politics and its strategic environment will deteriorate.

Jokowi should create a special office equivalent to an executive national security council — or at least a task force — as a central hub to streamline information and provide options to deal with China and other strategic challenges. This would help the policy formulation process as well as our strategic communication. We cannot deal with China unless we speak with one voice.

Such a strong commitment, however, should be a prelude to a wider push to overhaul Indonesia’s maritime governance. It’s time to end the overlapping authorities of a dozen agencies over our waters. The Maritime Security Agency (Bakamla) should be expanded and be the country’s primary coast guard with the Navy providing occasional assistance. We cannot act on our voice without a single body.

Second, we should seek a realistic strategic outcome.

Getting Beijing to publicly renounce its (illegal) claims seems like a bridge too far as they remain central to China’s domestic legitimacy. Instead, we should focus on getting China to modify its behavior in the North Natuna Sea in the long run.

We should aim to have Beijing direct its fishing vessels and coast guard to stay away from the Natuna waters for extended periods and refrain from using “historic fishing rights” when referring to Indonesia’s waters. A more expansive goal like finalizing a high-quality ASEAN-China Code of Conduct should be on the agenda down the line. But it should not take precedence over China’s behavioral modification in the Natuna waters.

Finally, we should expand our strategic toolkits.

Bilaterally, we should consider a stronger pushback beyond protest notes. For example, unless China’s fishing vessels and coast guard clear our waters, we should recall our ambassador in Beijing home. We have recalled ambassadors for lesser offenses.

There are other steps we can take should the need arise, including reviewing existing cooperative activities and engagement. In any case, Jakarta should be clear that there is no “bilateral negotiation” to be had because China does not have a lawful position in our waters.

Multilaterally, Jakarta should boost its coordination and engagement with Malaysia and Vietnam over maritime policies and issues. While getting ASEAN to rally around maritime problems has been difficult, Indonesia could find common ground with these two countries — and the other South China Sea claimants in Southeast Asia. A stronger regional response to China requires a united front with our neighbors.

In addition, Indonesia should consider a broader push to increase and institutionalize its strategic engagements with Japan, India, Australia and South Korea. As fellow middle powers, we are all invested in Indo-Pacific strategic stability and order, which cannot be achieved if “might makes right” is the name of the game. Indonesia has such “minilateral” cooperation with others, but we do not have one with these four countries under a single framework over concrete issues like maritime security.

All of these options are, of course, not without their risks. China could push back harder, for example, and threaten our economic ties — although we should keep in mind that such ties are a two-way street. But we did not elect Jokowi to make the easy and risk-free choices.

If anything, Jokowi should be more willing to take risks in his final term. There are no easy paths to long-lasting legacies and there is none harder than laying a strong foundation for a more equitable strategic partnership with China.

Disclaimer: The opinions expressed in this article are those of the author and do not reflect the official stance of The Jakarta Post.

The article originally appeared in www.thejakartapost.com on January 8, 2020