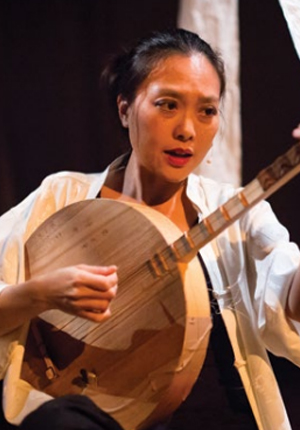 [Jen] has apprenticed herself to indigenous musicians in Java, Kalimantan, Timor-Leste, South Korea, Japan, and beyond. Fulbright was instrumental in funding Jen’s deep-dive into Indonesia in 2011–2012. There, she encountered masters who were generous in spirit, and exacting in their standards.

On the 2015 album Sounds and Cries of the World, Jen Shyu’s voice glides beyond parochial borders.

Consider the song “Mother of Time”: Jen sings a Javanese melody, layered with English lyrics that were inspired by a Taiwanese poem, and concludes with a Korean prayer.

On stage, the 39-year-old performance artist can shift genres in the blink of an eye, akin to cinematic montage. Accompanying herself on instruments ranging from a Korean zither to a grand piano to Vietnamese percussion sticks, she believes her music conveys “the essence of traditions” in contemporary form. She dislikes the label “fusion”—noting that this has often been applied to compositions stitched together in a superficial manner. For Jen, depth of emotion and rigorous study of craft flow into each performance.

She has apprenticed herself to indigenous musicians in Java, Kalimantan, Timor-Leste, South Korea, Japan, and beyond. Fulbright was instrumental in funding Jen’s deep-dive into Indonesia in 2011–2012. There, she encountered masters who were generous in spirit, and exacting in their standards. “The more earnest you are, and the harder you work, the more they want to give you,” she notes. Her work involved concentrated hours of practice, assiduous note-taking, and an intuitive human connection that can be felt without words.

Today, even if listeners can’t instantly grasp the literal meaning of all of her lyrics, Jen hopes they will respond intuitively to the moods and the melodies.

Music “works on the body—it gets to what we all have in common,” observes Vijay Iyer, a celebrated composer and curator, who chose Jen to perform at the Ojai Music Festival in California in June 2017, in addition to other venues. “I think that Jen’s in-depth cross-cultural explorations have put her in touch with some essential realities about the human condition— particularly issues facing women around the world. She has a beautiful, versatile voice with tremendous depth and range, and she brings forth expressions from the edges of human experience.”

Versatility has been the hallmark of Jen’s life, from an early age. Growing up in Peoria, Illinois, she studied piano, violin, voice, and ballet. Teachers recognized her flourishing talent. At age 13, she wore a puff-sleeved dress as she sat down at the piano to play Tchaikovsky’s Piano Concerto No.1 in B Flat Minor with the Peoria Symphony Orchestra—a far cry from the sleek sarong and strapless black top that she dons for her latest performance piece, “Nine Doors,” which premiered in New York in June 2017.

From Western classical music, Jen switched to jazz, gliding to a new range of prestigious collaborations in jazz circles on both the east and west coasts of the United States. But she was restless. Her thoughts kept returning to her ancestry. Her father was raised in Taiwan, and her mother was the child of Hakka Chinese who had settled in East Timor (now the independent nation of Timor-Leste). After meeting at Syracuse University, her parents forged a new life in the American Midwest, which didn’t entirely suit their daughter. Jen’s friends in the jazz scene encouraged her to wander further afield, and avoid being pigeonholed as “just a Chinese-looking girl singing like Sarah Vaughan.”

She began in Taiwan, where a cousin nicknamed “Acid” (due to her devotion to acid rock music) told her about the 1970s folk icon Chen Da, a slender singer known for strumming a traditional Taiwanese moon lute. Glimpsing the lute’s beauty and storytelling possibilities, Jen adopted it as one of her signature instruments. A subsequent three-month stint in Timor-Leste put her in touch with singers whose stirring voices had been almost buried under a legacy of war and neglect. With Indonesia right next door, she made up her mind to make a brief visit—and that one week in Yogyakarta in 2010 marked a profound change in her life.

Just a few lessons in the complex Javanese vocal art of sindhenan convinced her to apply for a Fulbright grant to enrich her repertoire in Solo, Central Java. “How do I get my voice to approach that unforced clarity that can cut through the whole gamelan?” she wondered.

The story of Jen’s musical evolution in Solo in 2011–2012 offers a vivid illustration of Fulbright’s ripple effect. It’s a tale of artists influencing other artists, both in their creative directions and their access to a vibrant international network. For example, after collaborating with Jen in Central Java, Indonesian jazz composer Djaduk Ferianto secured a grant to visit New York and was embraced by Jen’s avant-garde jazz circles. That sojourn also taught him something about the value of systematic planning in an artistic career, he says. Jen’s recommendations also helped several other talented Javanese artists come to the notice of overseas patrons.

Moreover, her story also shows how a “foreign” artist can act as a bridge to connect local artists, inspiring everyone in the process. Prior to her departure for Indonesia, Jen spent some time in New York with gamelan director I. M. Harjito, who praised a sindhen known as Nyi Ngatirah. A legend in her prime, the elderly Ngatirah was still eking out a living in Semarang, performing weekly with a wayang orang troupe. It was a two-hour trip from Solo, but Jen visited her about six times, requesting vocal guidance and making recordings for later study. She collected donations to ease Ngatirah’s difficult living conditions, and arranged for her to travel to Solo to interact with younger musicians who had never met the aging virtuoso.

With a dash of humor, the senior sindhen urged Jen to enunciate properly. “She would say, ‘I’m missing teeth, and I can still sing more clearly than these young singers,’” the Fulbright grantee recalls. Once Jen started learning kromo, the most polite form of the Javanese language, her sindhen skills improved. One of her new friends, the outstanding vocalist Peni Candra Rini, decided to come along to Semarang. She had grown up listening to Ngatirah’s voice on the radio. From a seemingly distant idol, Ngatirah became a charismatic force for Peni’s work. “Her energy was really important for me, to touch the reality,” observes Peni, trained at the Institut Seni Indonesia Surakarta (ISI).

Tackling the difficulties of the slendro pentatonic scale, Jen studied with ISI guru Darsono. “I never wrote out things in Western notation to memorize these melodies. I just did it by ear,” Jen says. Aware of her talent, Darsono was equally struck by Jen’s deferential treatment. “I felt like her parent,” he says, noting that she would always supply the food and drink of his choice during private lessons. He gladly sang at her Javanese housewarming ceremony, sloshing through the mud as he circled the house three times.

As someone who always felt a great urgency to inhale new languages and art forms, Jen learned how to slow down. “You’re going to learn so much more if you are patient, and take on one thing at a time,” she observes. This philosophy also helped her to emulate some of the glacial movements of Javanese court dance.

Jen also approached intrepid director Garin Nugroho, whose work she admired in the film Opera Jawa, a surreal musical extravaganza. Garin agreed to direct Jen in “Solo Rites: Seven Breaths.” Jen became more comfortable with audiences, mingling for some banter akin to a goro-goro interlude in shadow puppetry. She also got some lessons in dramatic timing. On Garin’s suggestion, in a charged final scene, she holds a pair of scissors to her throat and then cuts off a fistful of hair as a symbolic detachment from the baggage of the past.

For the first time, Garin recognized his own affinity for solo work, which he says can truly showcase talent and focus on the body of an individual artist. He directed a solo for Javanese dancer Rianto in 2016. And he plans to work with Jen again in 2018 on a piece titled “Zero.” That title partly refers to the landscape flattened by the vicious tsunami that struck Aceh province in 2004, leaving some 170,000 people dead. “Technology is developing strongly, but the ability of people to understand nature decreases until zero,” Garin observes.

Memories of the dead play a dominant role in “Nine Doors.” The work conveys Jen’s grief over a fatal accident involving Sri Joko Raharjo, a lithe and promising young composer and puppeteer, who was a constant companion for Jen and Peni at ISI. In June 2014, a truck slammed into a car containing the sleeping figures of Joko, his wife, and two children. Only his daughter Nala, then six years old, survived.

In one sequence, Jen summons those moments just after the crash, imagining Nala to feel dazed and alone. Jen plucks at her gayageum (the Korean zither) and then bends over the piano. In sindhen tradition, she sings a Javanese melody actually composed by Joko at ISI. The music is overlaid with wisps of memory: a recording of the bright mingled chatter of Peni, Joko, and Nala. Then come verses in Indonesian, stressing the need to “keep going” despite the loss.

Much of Jen’s music and her encounters across the world seem interwoven with her Chinese name, Qiu Yan, translated as Autumn Goose. As portrayed in ancient poetry, Jen learned, this fowl embodies “the cycle of departure and return, the inevitability of both, and the longing that accompanies the one leaving and the one left behind.”