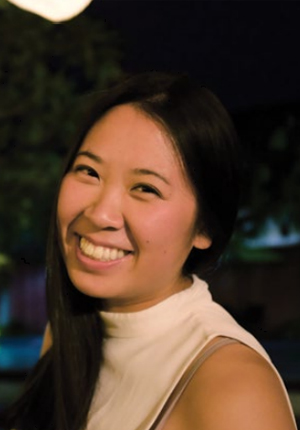 Choosing to major in international studies, Jessica wasn’t quite sure of her future path. But a Fulbright English Teaching Assistantship (ETA) assignment in Kupang in 2011–2012, in the lessdeveloped eastern region of Indonesia, proved to be a turning point.

When she was nine years old, Jessica Peng had to learn English on the double.

Her family had just moved from Taiwan to the United States, and she needed to work hard to catch up with the rest of the 4th grade in Syosset, New York.

Fortunately, Jessica didn’t have to struggle alone. In class, her primary school teachers paired her with bright students who made her feel welcome. At home, her mother relied on extra copies of textbooks to go over homework assignments—teamwork that helped both of them progress in the language. Early morning classes in English as a Second Language (ESL) boosted her confidence to speak up and branch out from her native Mandarin. Before long, she was fluent in English. And, by the time Jessica hit 18, she won admission to Vassar College, gaining access to top-notch education in America.

Choosing to major in international studies, Jessica wasn’t quite sure of her future path. But a Fulbright English Teaching Assistantship (ETA) assignment in Kupang in 2011–2012, in the less-developed eastern region of Indonesia, proved to be a turning point. Her buoyant high school students introduced her to the cultural diversity of Eastern Indonesia, including its music, such as the tunes played on the sasando, a zither-like stringed instrument crafted from a bamboo tube and palmyra leaves. She, in turn, became interested in their aspirations for higher education, mostly on the island of Java.

Mindful of her own early experiences with migration—and the importance of cultivating a sense of belonging—Jessica wondered how such students might adapt to their new university lives, away from their families and cozy island traditions. Some students were apprehensive about their potential to fit in and succeed. A Vassar Maguire Fellowship allowed Jessica to teach English at two different campuses for a year in Yogyakarta, where she listened to the frustrations voiced by students from Flores, Sumba, Kalimantan, West Timor, and Papua. Ultimately, Jessica decided to specialize in the anthropology of education.

“I appreciate the pragmatism of the field of education. People see that problems get solved in real, tangible ways,” says the 28-year-old student, now in her second year of a PhD program at the University of Pennsylvania. She spent a large chunk of her summer in 2017 speaking to education experts in Indonesia, sussing out trends in educational development so that her upcoming thesis topic will be relevant to enhancing inclusion and opportunity.

She spent some of her time at Vassar in proactive efforts to interact with minority students and make them feel welcome. As a multicultural recruitment intern at Vassar’s Office of Admission, she spoke to prospective freshmen by telephone and organized overnight visits. To ease their transition, she formed an advocacy group that included first-generation college students, along with those from disadvantaged socioeconomic backgrounds. In Muslim-majority Indonesia, Jessica was assigned to SMA Kristen Mercusuar in Kupang, where many of her students were Christians. Accustomed to watching movies and TV shows filled with white faces, they were not expecting a young Chinese woman to arrive as their English teacher from America. But it didn’t take long for Jessica to bond with them over popular music and other aspects of global youth culture. Some students spoke openly about beauty standards for skin color, reminding Jessica of her own teenage years.

Ariyani Manu, an English teacher at Mercusuar, admired Jessica for making the classroom a fun place for interactive learning. Jessica brought a toaster into the classroom, explaining how to make toasted peanut butter and jelly sandwiches and then chomping on the sandwiches with the students at the end of the lesson. “She always showed the students something new,” recalls Ariyani. “I learned a lot about American culture from her.”

Jessica also urged the Indonesians to explore their own roots. Each pupil was asked to complete a short oral history of his or her family. For the WORDS competition, an annual highlight of the American Indonesian Exchange Foundation (AMINEF) calendar, she worked closely with student Glenn Saudale on polishing his speech about the history of Rote Island, where his parents work as doctors. Glenn punctuated his tale by strumming the sasando, impressing the judges in Jakarta. Today he is studying medicine, and his improved English comes in handy in his training.

In Yogyakarta, Jessica came to know Ria Ongabelle, a student from Flores enrolled at Sanata Dharma University. As Ria recalls, “The most memorable moment was when she asked us to prepare a presentation about how we saw ourselves, and what we love to do that others did not notice. It was so hard to talk about ourselves, but she encouraged us.”

Jessica also coaxed Ria into applying to a US State Department program managed by AMINEF called Global UGRAD, which provides one-semester scholarships for study and cultural enrichment in the US. Ria was initially reluctant, believing her English to be less fluent than that of many of her peers. But her teacher from America “said I was brave and she loved the way I was being active in the classroom,” Ria recalls. “She said, ‘You can do this, Ria. Don’t be afraid.’”

Ria did win the scholarship in 2013. She was placed in Bennett College, a private liberal arts college in Greensboro, North Carolina, with a historical commitment to educate young African American women. She says she was fascinated by the focus on African American life. “I could experience their history, their culture, their daily life, and [see] how those are different from white Americans,” she says. Ria was subsequently chosen to speak about her unusual experience at the Global UGRAD Workshop in Washington, DC, and managed to visit Jessica in New York at Thanksgiving. She is now working in Jakarta as an English teacher for BPK PENABUR, a network of private Protestant schools.

Unfortunately, students from eastern Indonesia constitute only a tiny minority of the student body at Indonesia’s best universities. In an academic paper, Jessica cited a World Bank study showing that only 2.24 percent of all students admitted in 2007 to the top five public universities hailed from Eastern Indonesia. Competition is intense. In 2010, for example, there were only 80,000 seats available in public universities, compared to the 447,000 students who sat for the National University Entrance Exam. While private universities are trying to fill the gap, the costs can be prohibitive.

This has hampered the dreams of many students from Eastern Indonesia, as Jessica has observed. Some have to leave campus and work when their families exhaust their resources, and try to resume their studies later. Beyond economic considerations, however, they often feel that they face discrimination in student housing (known as private kos) and can be ostracized by Javanese classmates.

As Indonesia looks ahead to more rapid development in the east, the challenge of leveling the educational playing field has become more urgent. As Jessica observes, the post-Suharto decentralization requires a more sophisticated cadre of indigenous civil servants. More opportunities are also opening up for vocational education, particularly in places like Papua and Sulawesi.

In 2015, after completing a master’s degree at the University of Pennsylvania, Jessica covered more ground in Indonesian education. She worked on a monitoring and evaluation team for Chemonics, a Washington-based development consultancy, which was implementing a five-year project called Higher Education Leadership & Management (HELM) for the United States Agency for International Development (USAID). Jessica delved into issues including women’s leadership in higher education, and industry/classroom partnerships to foster skills in entrepreneurship. A final report in 2016 indicated that 68 percent of institutions participating in HELM managed to improve their standard operating procedures in finance

Gaps in the education system were also identified, including top-down teaching methods, poor technology, and “entrenched leadership cultures that cast out women and first-generation students from minority backgrounds,” according to the Chemonics report.

Many countries face similar challenges. In continuing her research, Jessica might have her pick of new territories to explore. She has already worked in both Vietnam and South Africa, and recently spent time in Nepal. Yet she keeps circling back to Indonesia, and its warm reservoir of teamwork.