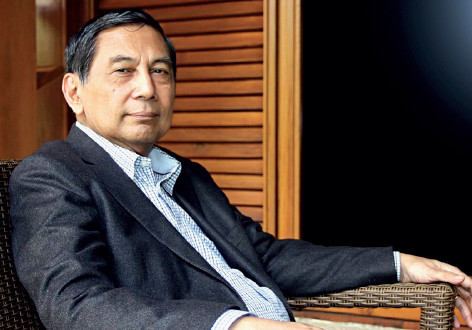 “In coming to Indonesia, American scholars can better understand and love their own history and homeland,” said Juwono Sudarsono. “They will feel a kind of nostalgia for their nation’s history. If they are attentive, they will see that Indonesia is going through phases that the United States has already passed through.” Juwono believes Indonesia can be likened to a giant laboratory where “American scholars can learn a lot,” he said.

Juwono was born in Ciamis, West Java, in 1942. His father, Dr. Sudarsono, served as the Minister for Social Affairs immediately following Indonesian independence. Juwono went to America for the first time in 1963 under a United States Information Service (USIS) scholarship for student leaders. “It was a very depressing year. I witnessed and felt how still the country was because that was the year when President Kennedy was shot in Dallas,” he recalled.

Later, in 1969 – 1970, Juwono received a Fulbright scholarship for a master’s degree. He went to the University of California at Berkeley with seven friends who formed a group called “The Berkeley Eight.” Humorously, in Indonesian, the name turns into “Berkelahi Berdelapan” or “The Fighting Eight.” Members of the group included Gondomono, who studied Chinese literature, and Soerjono Soekanto, who studied sociology and political science.

“The eight of us called our study program ‘Politics and Chinese Food Studies,’” Juwono joked. The others members were James Danandjaja, Harsja Bachtiar, and Basuki Soehardi, who taught at the University of Indonesia; Imran Manan, who became rector of the Medan Institute of Teacher Training and Education (IKIP); and Budiman Christiananta at Airlangga University in Surabaya. Juwono himself became the dean of the Faculty of Social and Political Science at the University of Indonesia. He also taught at Columbia University in New York in 1986 – 1987.

“For me, and probably for my friends as well, the Fulbright scholarship provided an opportunity to find ourselves, to really discover our unique personalities, and in the process to improve ourselves. The opportunity to study in the United States gave us a scientific vision,” he recalled.

“Indonesian Fulbrighters made their experiences in America a benchmark in their own personal histories. They were linked to who was in the White House at the time. “For example, at the time of Eisenhower in the 1950s; in the 1960s, during the Kennedy and Johnson periods; in the 1970s with Nixon-Ford and Carter; and then again in the 1980s with Reagan, Bush, and Clinton in the 1990s and so on, Indonesian Fulbrighters were there.” 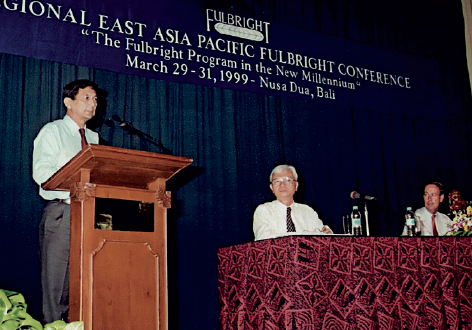 Minister of Education and Culture Juwono Sudarsono speaking at the Fulbright East Asia-Pacific Regional Conference in Bali in 1999.

INDONESIA AND THE FULBRIGHT EXPERIENCE

It is a distinct honor for me to be here this morning as a former Fulbrighter at the University of California at Berkeley in 1969 – 1970, and as former visiting Fulbright professor at Columbia University in 1986 – 1987. I want to thank and commend USIS, AMINEF and the organizers of this conference who have worked hard in its preparation.

It might be useful to put the Fulbright exchange program into historical perspective, injecting some of my own personal experiences, which may be of interest to you as administrators of this program.

Deputy Chief of Mission [Michael] Owens rightly says that Fulbright started modestly but that it has exceeded all expectations in terms of cost effectiveness. Fulbright has been acclaimed as having defined outstanding educational and cultural impacts for many of us in East Asia. Many Americans who went through the program over the past decades have also benefited enormously

The Fulbright Program was initiated in the early years of the Cold War, a time of a heightened ideological contest between East and West centering on the European theater but which by extension had important implications throughout East Asia and the Pacific.

From the early 1950s, the arc of U.S. military alliances–from Japan, Korea and Taiwan in North East Asia through the Philippines and Thailand in Southeast Asia down to Australia and New Zealand in the South Pacific–defined the perimeter of the United States’ strategic interest.

Fifty years later and following the end of the Cold War in 1990, we are all now involved in the transformation of that defense perimeter into a regional forum of reconciliation and cooperation among peoples and ideas of diverse cultures and ideologies. I am sure that the birth and successful growth of both ASEAN in 1967 and of APEC in 1989 in some measure reflect the success of those who went through the Fulbright Program.

Fulbright was instrumental in stimulating the idea of educational and cultural interchange, of both unlearning and relearning on both sides, in East Asia as well as in the United States. The idea of the program was far ahead of its time, and we are all the better for it.

The Fulbright experience became a process of self-discovery and self-realization for many of its participants. Today, the United States is the only comprehensive superpower: politically, economically, militarily, culturally and technologically. Fortunately, most of its leaders realize all too well that in order to lead effectively America must rely more on its ability to persuade through the power of its ideas, the dynamics of its culture and the reach of its domestic economy, driven by its young, energetic and talented “Internet generation.”

I first visited the United States from October through December 1963 on a USIS student leader grant. It was the best of times and, as it turned out, it also was the saddest of times. Arriving in San Francisco in mid-October, I was exhilarated to be in the United States at a time when President John F. Kennedy symbolized hope and vigor for many young people of my generation in Asia and the Pacific. But after Dallas on November 22 of that year, the United States seemed to descend into painful despair. For many of us now over the age of fifty, the searing impact of the Kennedy assassination on so many people around the world still registers strongly in our psyches.

So much and so fast has taken place in America that we still find it difficult to comprehend how these changes have impacted on our societies and cultures throughout East Asia. Many of these changes emanate from the driving force of the American economy, the powerful reach of its television and cinema, and its perennially alluring consumer life-style. Not all of these changes and influences have been particularly useful or beneficial to all layers of our societies in East Asia. Yet no one can deny the enormous impact that they have had on our values, life-styles and outlook to life, including in the critical areas of political, economic and social governance.

You will appreciate that at this moment in Indonesia’s history we are feeling the pressures for democratization and political openness in anticipation of the Indonesian general elections on June 7. Many American citizens as well as civic organizations are involved in assisting Indonesia in going through this process of our self-discovery in improving the political and economic governance of our country.

For Americans present in this auditorium, the given assumptions and underpinnings of democracy, of civil society, of press freedom and freedom of association, are taken as a matter of course. However, for us in Indonesia, the social-economic underpinnings of civic action, of effective public services and of peaceful political succession cannot be taken for granted. In fact, it is the very weakness — or even absence — of these requisite civic and economic institutions that make political and economic democratization enormously more difficult challenges for us.

However daunting and difficult those problems may be, I know that Indonesian Fulbrighters are committed to take up those challenges in his or her particular way. In an important sense, Fulbright has strengthened our hope of a better future and in our collective conviction that despite the difficulties, in the end we can and will surely prevail.

My compatriots who went through that Fulbright cross-cultural experience as academics, as artists and dancers, as journalists, as professionals in public service, banking, law, accountancy, life sciences, engineering — share my commitment to building a civil society based on a wider participation encompassing social justice, educational competence and cultural resilience of all Indonesians throughout this vast archipelago. On behalf of all of them, I thank the Fulbright Program for enriching our lives.

This article appears from the book of Across the Archipelago, from Sea to Shining Sea Commemorating the 60/20 Anniversary of Fulbright and AMINEF (Page 133– 141) published in 2012.