Mapia Atoll – The Next Jewel in the BHS MPA Network? by Mark Erdmann & Ricardo Tapilatu

We first learned of Mapia Atoll from legendary Indonesian dive guide Larry Smith; Larry used to visit the atoll regularly with the liveaboard Cehili back in the early 90’s, and he raved about the huge fish schools, abundant sharks and generally beautiful crystal clear visibility. Sadly, the Taiwanese live reef food fish vessels reached the remote atoll (located about 100 nautical miles north of Manokwari in the far NE corner of the Bird’s Head) by 1993, and Larry sadly related how they decimated the grouper and Napoleon wrasse populations in a short period (as well as stripping out many of the sharks). Nonetheless, by 2005, Larry reckoned the fish populations might have recovered, and from that moment we began scheming on how to get to Mapia to properly survey its marine biodiversity and conservation potential. Though one of us (Erdmann) was fortunate to make several short visits to the atoll whilst aboard the expedition vessel True North between 2013-2017, it was only in 2018 that the luxury liveaboard MV Rascal agreed to host a small team from the University of Papua (UNIPA), Conservation International and the Indonesia Manta Project to visit the atoll as the first expedition in their “Exploration Series”. Our trip was officially supported by the Supiori Regency government, which has authority over Mapia. Herein we report our preliminary results from that December 2018 survey to this stunning jewel of northern Papua!

Aerial view of Mapia Atoll and its 5 associated islands

Embarking from Manokwari, we were fortunate to have very calm seas for the 15-hour steam north to Mapia.  Our objectives included a general survey of the condition of the reefs and reef fish assemblages in Mapia, a survey of the purported turtle nesting beaches in Mapia and of the small population of reef mantas observed there in 2017, and interviews with the local community to gauge their interest in a potential conservation initiative in Mapia – including the potential gazettement of a new MPA. 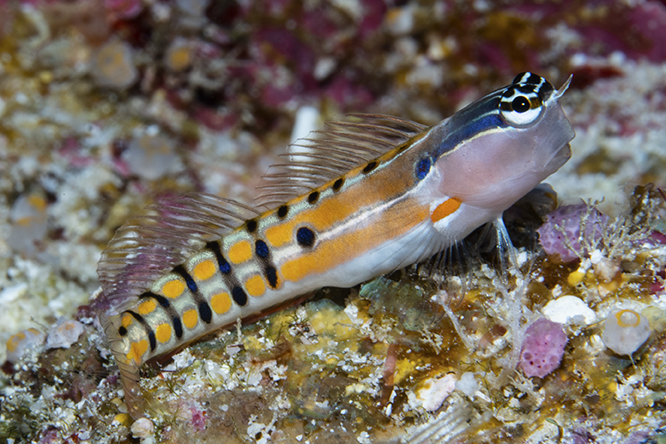 The beautiful coral blenny Ecsenius axelrodi is super abundant on the shallow reefs of Mapia.

Our transit aboard the Rascal was pleasant and uneventful, though upon arriving at Mapia, the Captain eventually decided against our original plan to enter the atoll’s protected lagoon. The channel into the lagoon begins with a perfectly demarcated long cut through the reef that is both plenty wide and deep, but just before entering the lagoon it dog-legs left and shallows out considerably to only about 2.5m depth at high tide. It is certainly possible for many of West Papua’s liveaboard fleet to enter the lagoon, but it does require a high-tide entry and a Captain certain of his draft! 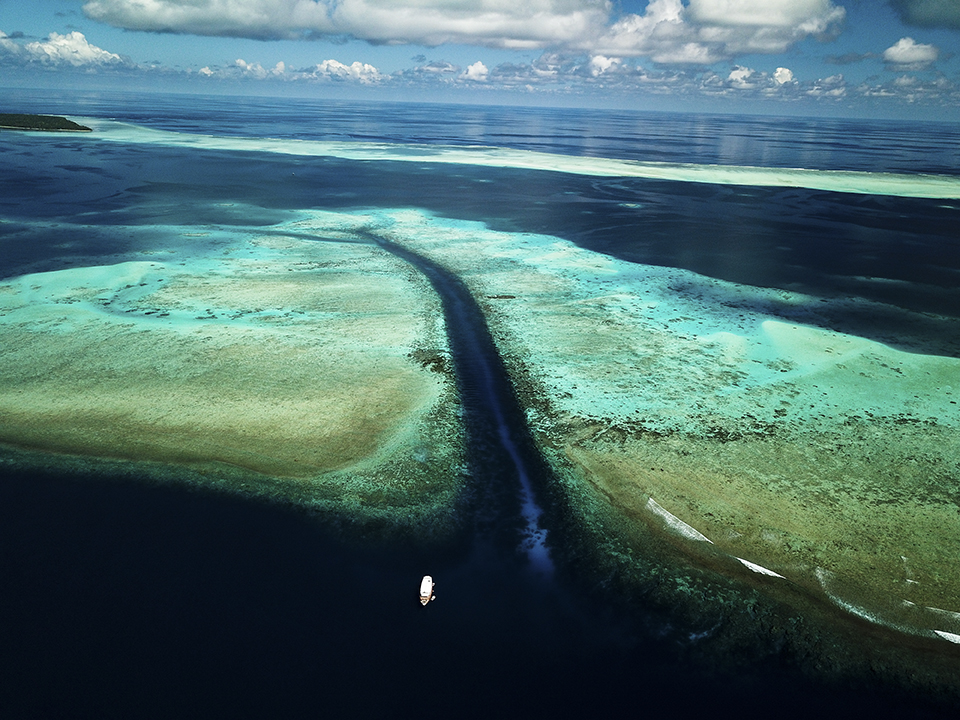 The channel into Mapia Atoll makes most captains nervous! The first 90% is straightforward, but the final 10% requires a hard left hand turn, with significant shallowing of the channel to about 2.5m at high tide!

Over the next 5 days, we took advantage of the stunning conditions and dived extensively around the atoll and within the lagoon, all the while using drones to survey for mantas and turtles. In the meantime, our conservation team including Kris Thebu and Julia Tapilatu spoke extensively with local community members and rapidly developed a good understanding of their views on marine resources and conservation (fortunately very positive!). The manta team of Edy Setyawan, Sarah Lewis and Ronald Mambrasar were frustrated to find no trace of mantas during the trip, though villagers confirmed what Erdmann observed in 2017 that mantas are common visitors in the lagoon. Seems they must have all been cruising the deeper waters surrounding the atoll while we were there! 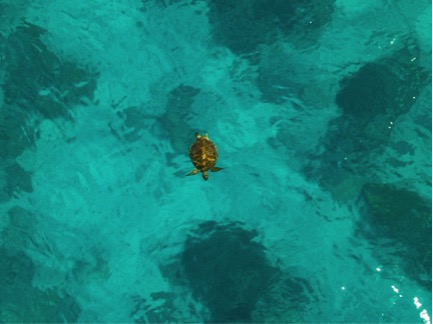 Green turtles were spotted frequently from our drones, but sadly no mantas this time!

Despite the manta disappointment, the reefs enthralled us all!  The corals were vibrant and healthy, and the reef fish stocks were impressive! The entrance to the channel pass is one of the best dives on Mapia, with huge aggregations of fish on a rising tide (jacks, barracudas, sailfin snapper and abundant grey reef sharks). The southern point of the atoll was likewise magical, as were numerous sites along the western wall – with sharks (including the occasional hammerhead and silvertip) seen on nearly every dive.

Mapia’s reefs are healthy and vibrant and teeming with fish – well worth the journey.

We also managed a number of new biodiversity records for the BHS during the survey, including several rare fish species and several potentially new ones!  Because of its unique oceanic conditions, Mapia has a number of fish species not normally seen on BHS reefs, and we look forward to the opportunity to delve more deeply into this biodiversity! 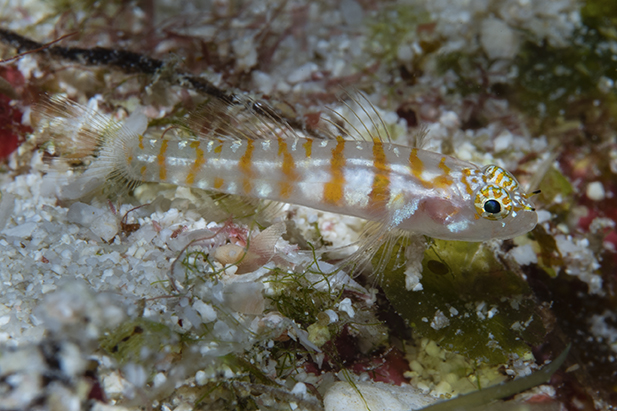 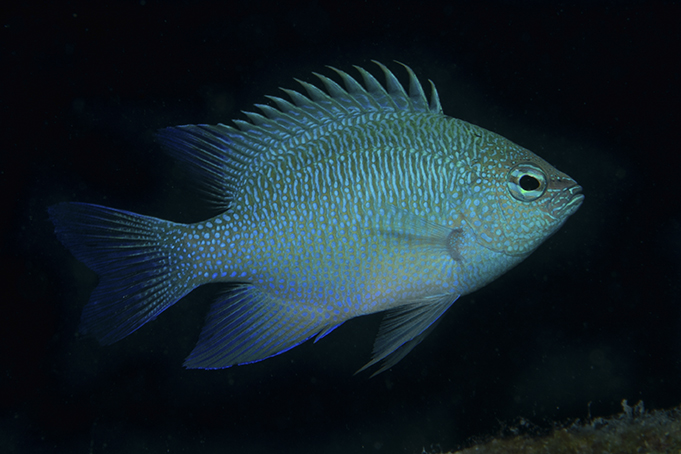 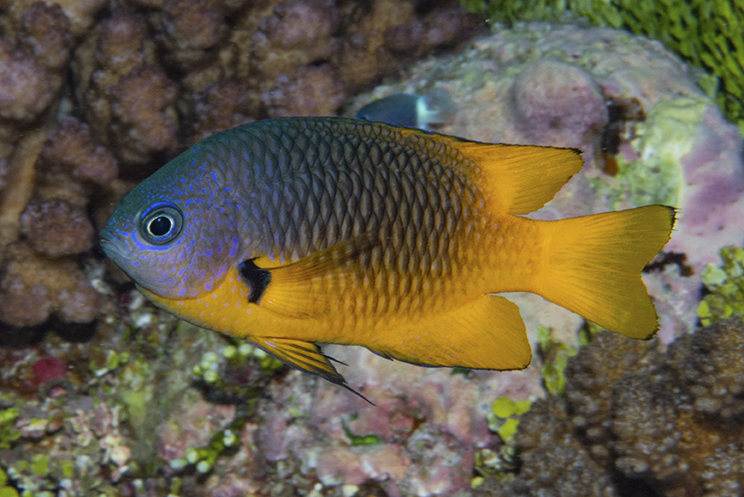 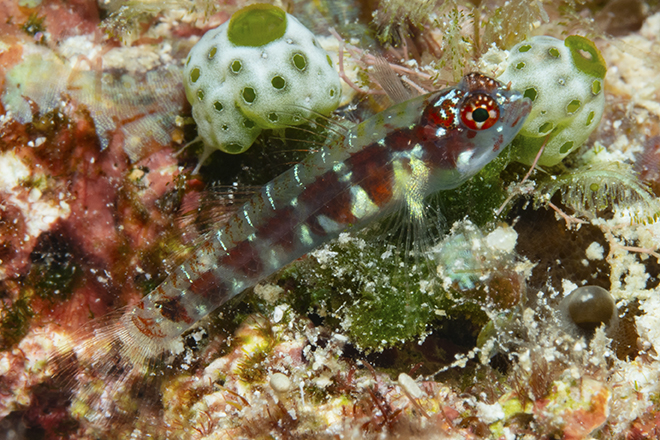 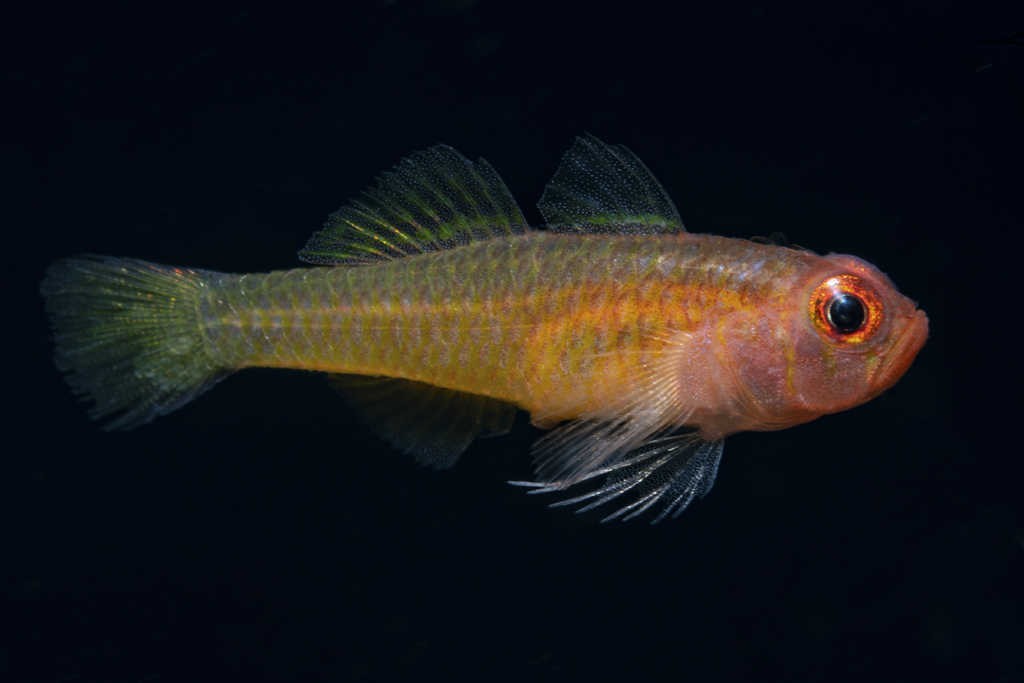 From top: The rare Eviota pinnochioi, described from Palau but never photographed live; the beautiful damselfishes Chrysiptera ellenae and Pomacentrus philippinus, both looking quite different at Mapia and potentially new species; and finally, two dwarfgobies (Eviota sp and Trimma sp) that both appear to be new.

Ricardo’s turtle surveys went well also; we confirmed healthy populations of green, hawksbill turtle populations and potentially olive ridley turtle population at Mapia, and also that at least 2 of the atoll’s 5 islands are important turtle nesting beaches. Rick, Julia with two locals laid temperature dataloggers on Brassi Island. A few dataloggers were left to locals to be laid in other potential rookeries and also in fresh nests of sea turtles if encountered.  Further, Rick aims to satellite tag some of these turtles in the near future to get a better idea of their movements when/if they leave Mapia.

The main island of Mapia hosts a lovely traditional village and a Naval base, while the two uppermost islands in this photo are uninhabited and are important turtle nesting beaches.

As mentioned above, the local Papuan community on Mapia, who are primarily copra farmers and only fish for subsistence, were both proud of their beautiful islands and quite enthusiastic about conservation to ensure their reefs remain healthy. We are moreover delighted to report that when we presented the results of our survey (in early September 2019) to the Supiori government, their response was enthusiastic and promising; they are keen to develop tourism to both Mapia and the rest of Supiori (which has fantastic surf breaks!), and are open to the idea of potentially gazetting Mapia as a new MPA. 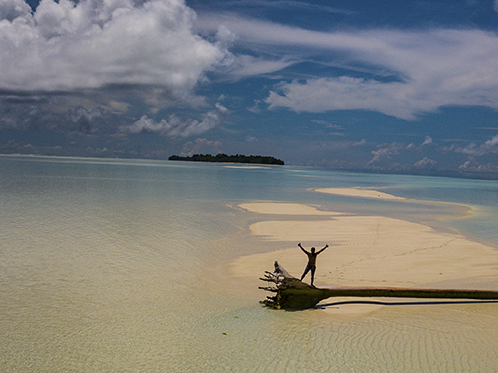 Mapia is a special place, and hopefully in the near future may also receive protection as the 21st MPA in the 4.6 million hectare BHS MPA Network!

Dr. Mark Erdmann is Conservation International’s Vice President of Asia-Pacific Marine Programs, while Dr. Ricardo Tapilatu is head of the Research Centre for Pacific Marine Resources at the University of Papua. We’d like to warmly thank both the Supiori regencial government for inviting this survey and enthusiastically reviewing the results, as well as the MV Rascal team for sponsoring the trip and providing an outstanding platform for our survey!

Ricardo Tapilatu was awarded Fulbright PhD Scholarship to study at University of Alabama, Birmingham in 2008 and Fulbright Visiting Scholar to conduct postdoctoral research at Conservation International in 2017.