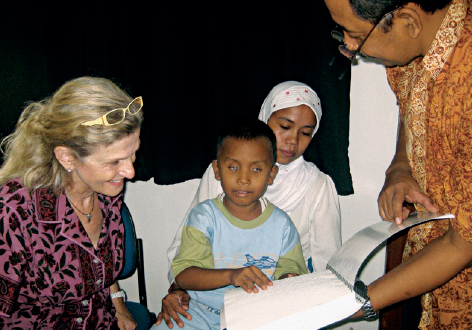 Finding the Frames of Reference

I taught for three semesters as a Fulbright lecturer at a small college in Jakarta, STISP Widuri, which was one of the first social work schools in Indonesia. In 2002 there was an incredible opportunity to help develop the social work field in Indonesia. There were no child protection systems; there were no local social welfare systems in place.

The wonderful faculty and social workers at Widuri were very dedicated, but there was also a lot of confusion about social work practice and a distrust of using clinical/ generalist social work skills to address Indonesian social problems. Everything was wide open, with such an enormous need for the profession, and that was one of the things that really drew me in.

And the experience changed me. I first went to Indonesia thinking that I knew practice and that I had something to offer. And I think I did, but I realized very quickly that practice as I knew it could never work in Indonesia. I had run the clinical social work program at Hunter College in New York City, with an emphasis on psychodynamics as an important theory base in social work practice with individual and families, but it didn’t make any sense in Indonesia. It’s not the way people think; it’s not the frame of reference. The things I learned in Indonesia had a big influence on my decision to leave Hunter in 2006 because ultimately the work in Indonesia was so much more compelling than the work in the United States.

After the Fulbright grant I returned as often as I could to teach at Widuri. Being part of this school and the social work community was a gift because I really got to know so many dedicated people quite well. I became close friends and a fierce collaborator with Cynthia Pattiasina, a skilled social work practice teacher and head of the field practicum in the S-2 program at Widuri, until her sudden death in 2011. The head of Widuri, Tien Gosana, was also a very dear friend of mine until her death in 2005. Through both of these colleagues, I became very involved in the wider social work community. In 2002 there was only one master’s degree program in social work in Indonesia, but with the Fulbright Program I helped play a role in designing the second master’s program at STISIP Widuri. I also was asked to assist in designing the first doctoral program in social welfare, at the University of Indonesia, and since 2008 I have taught a course there every year.

The other thing I’ve been involved with is a project I started in Jakarta: Building Professional Social Work (BPSW). In 2004 I was just returning to Indonesia — I was in the air, in fact — when the tsunami hit. Right away a small group of us from the Indonesian Association of Professional Social Work (IPSPI) put together a training program for the Ministry of Social Affairs up in Aceh to help the social workers there connect with resources and do community work. BPSW grew out of that experience, with a mission to train local social workers to better assist communities and families in community-based care. Since the tsunami, that has been my work in Indonesia. BPSW has been involved in many trainings and in helping to develop social work in fields of practice such as child protection, mental health, HIV, postdisaster, and school social work.

Fulbright was really the start of what I think is the career for the rest of my life. It put me into this field that was fascinating and personally involving with so many wonderful people, and in that sense it was really a launching pad for me.

This article appears from the book of Across the Archipelago, from Sea to Shining Sea Commemorating the 60/20 Anniversary of Fulbright and AMINEF (Page 145– 147) published in 2012.