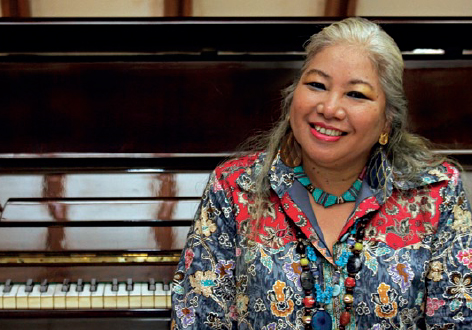 A Thank You Song for Fulbright

The tinkling of piano keys interspersed with the sound of a tambourine and the beat of a magic box (a Peruvian box-shaped percussion instrument) filled a sunny afternoon at Marusya Nainggolan’s home. This Fulbright scholar, affectionately called Usya, earned a master’s degree in music composition from Boston University in 1989. During the interview session an assistant played counterpoint to Usya’s piano with bells, tambourine and other percussion instruments, while her son, a high school student, beat out a rhythm on the magic box.

Marusya Nany Fayme Nainggolan comes from a modest family of teachers. She was born in Bogor in 1954, the ninth of 10 children. As a child of a typical Batak Christian family, Usya was active in the church, singing and playing the piano. She learned English from an American neighbor, and in exchange, she taught her neighbor’s child how to play the piano. Today she and her family live in a quiet area of Pulomas in East Jakarta. On the second floor of her house is a Petrof piano and an assortment of traditional Indonesian musical instruments. A prolific composer, she is known for boldly combining piano with angklung, talempong, tambourines and other local instruments

Marusya’s musical experiments have received acclaim on the international stage. She is regularly invited to appear in a variety of countries and has performed for a number of embassies in Jakarta. “One day, I would like to give a special performance as a token of my gratitude to Fulbright,” she said.

After completing her studies at Boston University, Marusya returned home to teach at the Jakarta Arts Institute (IKJ). “But teaching is not enough,” she said. “We should also perform in public.” Marusya has given concerts on many occasions in response to tragedies such as the Bali bombings, the 2004 tsunami, and other natural disasters. For these events, she composed special songs, performing with other musicians on traditional instruments from Bali, Java, and Sumatra. She is highly creative and innovative. Her professor in Boston once called her a “born Mozart” and gave her an A+ grade.

Marusya hopes Fulbright will be more flexible about facilitating the exchange of musicians between Indonesia and America in the future. She envisions a large role for universities in finding and elevating local music to a treasured place on the world stage. For example, she herself came to understand the various implements of the Javanese gamelan, such as the bonang, peking, and kenong, only by reading about them in the Harvard Dictionary of Music .

So what did receiving a Fulbright scholarship mean for Marusya? “It gave me pride and an opportunity to show that, if given a chance, Indonesians can offer the best,” said the leader of the Marusya Chamber Music ensemble.

Until dusk, the sound of the piano can be heard coming from her home. Western classical and local Balinese, Batak, Javanese, and Sundanese music combine, forging new rhythms in turn

This article appears from the book of Across the Archipelago, from Sea to Shining Sea Commemorating the 60/20 Anniversary of Fulbright and AMINEF (Page 148– 150) published in 2012.