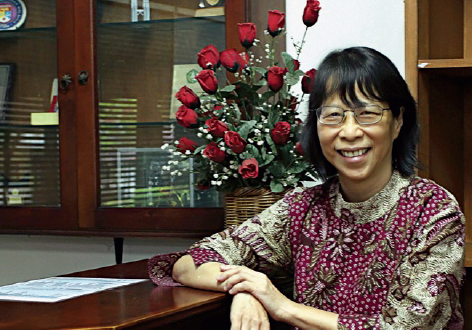 Theory and Practice of Multiculturalism

Melani Budianta received two Fulbright scholarships: first in 1980 – 1981 for a master’s program at the University of Southern California (USC), Los Angeles, and the second for a doctoral program at Cornell University in Ithaca, New York, in 1988 – 1992.

“Fulbright changed my life,” said this University of Indonesia graduate and Faculty of Literature lecturer. “Mostly, I gained a solid foundation with which to develop my knowledge of literature and culture — through the study of America in the 1980s and Anglo-American literature in the 1990s.

“Thanks to the Fulbright scholarship, I learned about America not only from books and movies, but directly through interaction with Americans in their country. By living in a slum area around the beautiful USC campus, among Hispanic and African-American ethnic gangs, visited by students who were Moonies (members of the Rev. Sun Myung Moon’s cult), I experienced first-hand the dynamics of democracy and diversity in the United States.

“The theory and practice of multiculturalism that I experienced in America in the 1990s helped me in dealing with some of the same kinds of problems of diversity that Indonesia faced. America became like a double-sided mirror — I could observe America while at the same time reflect on what was happening in Indonesia, and vice versa.”

From the 1980s to the 1990s, when Melani was exploring issues of diversity in America as reflected in its literature and culture, a centralistic policy and censorship were already suppressing the expression of diversity in Indonesia. There were policies about ethnicity, race, religion, and intergroup relations intended to stifle or limit debate about issues related to them at a very sensitive time.

Through discussions of American literature, Melani provides space for her students to talk about issues that were taboo in the early 1990s in Indonesia. When reading a novel by Maxine Hong Kingston, for example, students asked why the experience of racial discrimination did not appear in a novel written by an Indonesian of Chinese descent.

In a somewhat different context, in the United States, people began to be concerned about the movement against racial discrimination, which was considered to have caused the outbreak of “political correctness” that swept across the country. At her student housing apartment in Ithaca, Melani, who is of Chinese descent, experienced this when one afternoon she was called by the apartment manager because her 4-yearold son was accused of uttering racist remarks about a Chinese neighbor.

Everyday experiences were valuable in improving Melani’s understanding of culture. That is why, she says, “Fulbright’s success should be measured not only by the number of leaders and prominent intellectuals who participate in the Fulbright Program, but also by its invisible effects: the interpersonal interactions that correct the mass media stereotypes of America and provide a taste of American culture for the children and spouses of Fulbrighters who bring their families to America.”

To her, the opportunity for Indonesian families in America to get to know its society and culture and vice versa is the most obvious benefit of the Fulbright exchange program. To correct stereotypes about Islam in the eyes of her classmates in Ithaca, Melani’s 10- year-old daughter took the initiative to share her experience as a minority living in a moderate Islamic majority in Indonesia. For Melani, Fulbright alumni from Indonesia and the United States as well as their families have taken part in building bridges that span across the cultures.

“The Fulbright Program has not only increased the number and quality of human resources in Indonesia but has also constructed bridges between the cultures that will last long into the future. Thanks to the Fulbright Program, the people of Indonesia and America have intercultural ambassadors. Indonesia is lucky to have, for example, Janet Steele, a visiting American Studies lecturer at the University of Indonesia, who has become an expert on the Indonesian media. America has Paul Lauter, a leading professor of American Studies and literature at Trinity College in Hartford, Connecticut, who, through various visits and workshops, has put together a network of American Studies resources stretching across the region.”

Moreover, Melani sees a multiplier effect in the improvement of knowledge production in Indonesia and in America. “We should take note of the various teaching modules, courses, and new programs initiated by Fulbright alumni from Indonesia and the United States, as well as the students who enjoyed them.” Melani hopes that the Fulbright Program will continue to be increased in various disciplines, including the arts, literature and culture.

This article appears from the book of Across the Archipelago, from Sea to Shining Sea Commemorating the 60/20 Anniversary of Fulbright and AMINEF (Page 155– 158) published in 2012.