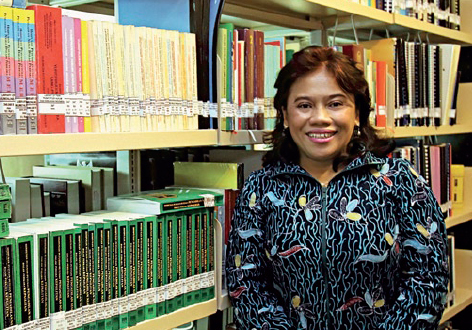 “In this Internet era, people may ask, why do we go to America? I can go to America in just two seconds.” This is how Ningrum Natasya Sirait, professor of law at the University of North Sumatra, alludes to people who are easily satisfied just by sitting in front of the computer. Apparently, there are many people who feel they have been to America just by using the Yahoo and Google search engines.

However, learning about the real America is more than just seeing the country through the glass screen of a computer and reading books. “You need to go there yourself, hang out, feel daily life, participate in all kinds of festivals and seminars, and even learn how to enjoy the holidays,” she said. “So the main task of the Fulbright Program today is to provide a true and essential experience and instill a deeper understanding. That’s a genuine experience.”

Ningrum Natasya, who prefers to be called Iyum, is the second of eight children and one of a few professors in business competition law in Indonesia. Her father, Bistok Sirait, also a Fulbright scholar, studied at Georgetown University in Washington, DC, while she studied at the University of Wisconsin, Madison. She earned her master’s degree with a thesis entitled “Dispute Resolution in International Commerce” in 1996.

Later, she returned to the United States, this time with a Fulbright scholarship to conduct dissertation research on economic and competition law. Iyum feels lucky to have had the guidance of Prof. Peter C. Carstensen, an international expert in the field of competition (anti-trust) law. With the dissertation, “The Association of Businessmen and Behavioral Analysis Based on Principles of Competition Law,” she earned her doctorate in 2003 at the University of North Sumatra (USU) and was installed as a professor there in 2005.

Now the professor is the USU graduate program secretary. She is well-known in various circles and successful as a student mentor in the USU’s various Faculty of Law moot court competitions at national and international levels.

“I was taught by conservative, long-time lecturers who only gave lectures in the classroom,” she said. “In America, my eyes were opened to the fact that coursework would be much more interesting if the students were exposed to concrete legal issues; for example, by taking advantage of moot court facilities. Now, the moot court festival is experiencing a boom and is held everywhere in our country.”

Since returning to Indonesia, this Batak daughter of Bandung born in 1962 has been vigorously encouraging students to participate in various moot court competitions in international law. The results as it turns out have been extraordinary. The USU student teams accompanied by Iyum won several championships, among them, the First Best Memorial at the 2012 Indonesian National Rounds of the Philip C. Jessup International Law Moot Court. This was the result of Iyum’s mentoring.

“Fulbright scholars are considered special, because it is difficult to acquire the scholarship. Therefore, the program needs to be special, too; that is, able to provide the essence of education. That’s what I mean by the essential experience, why we need to go study in America,” said Iyum, who has also received scholarships to other countries such as Japan and Australia, among others.

For the development of competition law, Iyum sees Indonesia as progressive and has learned much from the United States experience. After the 1998 reforms, there was rapid development in this field through the process of liberalization and market deregulation. The only thing that still requires special attention is the state officials’ understanding of legislation. To fix this, Iyum is busy with training programs in various regions of Indonesia, from Sumatra to Papua. “When speaking about the development of the tools of law, I want to do it as carefully as possible,” said Iyum.

This article appears from the book of Across the Archipelago, from Sea to Shining Sea Commemorating the 60/20 Anniversary of Fulbright and AMINEF (Page 162– 164) published in 2012.