Desa Batuan, Kecamatan Sukawati is a special nucleus of arts, folklore, and long-held unique artistic and religious traditions in Bali. Home to important lineages of dancers and painters, it’s often expected that those hailing from Batuan are skilled or connected with dance. From the 1970s, curious visitors, artists, and scholars from the West and Japan studied with masters like I Nyoman Kakul, Pak Jimat, and Pak Made Bukel. Thanks to their work and initial cultural connections, current Fulbright US Student Researcher Monali Varaiya continues the journey with Balinese arts and petopengan (masked dance), studying with her teacher, I Made ‘Cat’ Suteja.

Made ‘Cat’ expressed the hope to stage regular performances of topeng and gambuh, inviting an audience interested in Bali’s traditional performing arts. Performances like these, outside of their traditional settings at temple ceremonies, contribute to the preservation and development of the art by providing opportunities to teach the repertoire to the young generation. In fact, performing for discerning non-Balinese audiences can result in greater enthusiasm among the artists, pushing them to bring out their best. 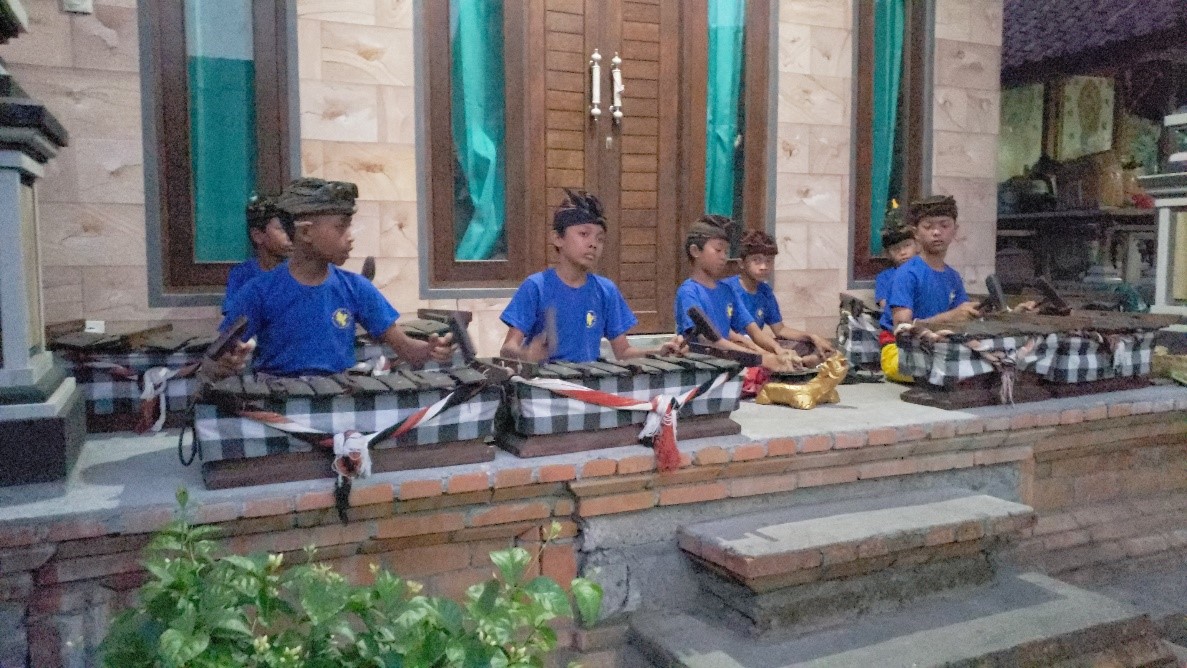 Having watched many ceremonial topeng and Gambuh performances throughout her study, Monali was keen that these excellent dancers and musicians should be seen by a wider audience outside of ceremonies. With the sponsorship of Fulbright-AMINEF & IKIP Saraswati Tabanan, I Made ‘Cat’ Suteja, Putu Sri Rahayu, and Monali Varaiya worked together to present two evenings of classical repertoire from Batuan, themed Niru Lampah. The first show was on December 22, 2019, entitled ‘Ngebatang Lima’, Balinese for ‘Buka tangan’ or ‘Open your hands’ – a colloquial way of saying ‘Dance!’. It engaged 22 children from 5-13 years old to perform gamelan selonding and dance pieces, a gamelan orchestra of eight musicians, and five topeng (mask) dancers including the three sons and grandson of maestro I Made Bukel. The show opened with two welcome dances and the foundational male dance Baris. The main item masked dance play, or Topeng Panca, played seven compelling masked dance characters of Bali’s imagined royal courts of old and told a mythical story of Bali’s separation from Java. A multi-cultural audience of 30 non-Indonesians, including Darmasiswa students, expatriates, and art enthusiasts, 20 students of Sanggar Langlang Jagat, and 42 local adults, including parents of students, friends, and supporters of arts in Batuan, watched the show.

The performance on the evening of January 5, titled ‘Manik Batu’ was a full-length classical gambuh performance with 14 musicians and 19 dancer-actors. An audience of 24 students from Gaucher College, 15 Darmasiswa students and ex-pats, and 40 local students and art enthusiasts watched the show. Of Bali’s many kinds of sacred dance and musical arts, Gambuh is the classical great-grandfather of Balinese dance theater, enacting stories of war and love from the Javanese epic poem Kidung Panji Malat. These art plays appear to have started around the 16th century during the patronage of King Waturenggong, when Java Timur’s great artists migrated to Bali with the Majapahit empire’s collapse. While the literature is extensive, dancers of Gambuh theater troupes like Batuan’s have typically passed down the key parts of the stories orally, through watching, practice, discussion, and listening, shaping them for use in dance dramas. As this village’s specialty, the haunting flute and percussion gamelan music, stylized speech in Old and Middle Javanese language, and specific choreography make this heritage very unique even for Balinese audiences. 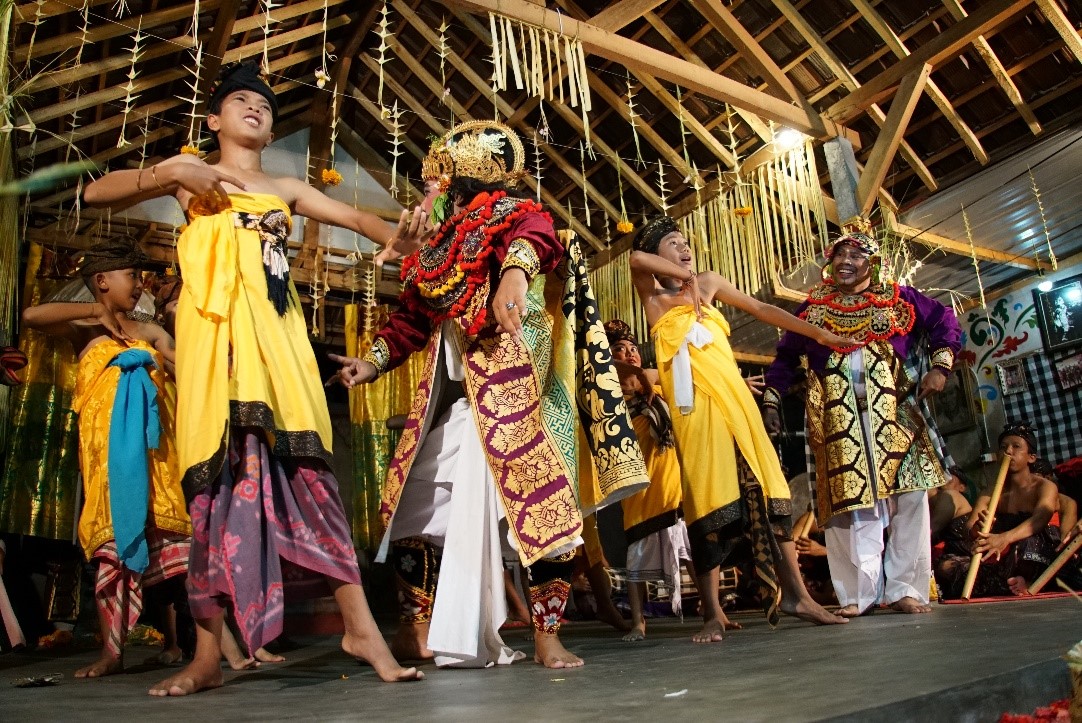 Potet-potet – Role designed for children to get introduced to Gambuh

The classical forms Topeng and Gambuh, as exposed to kreasi, were performed because Batuan is the heart of Bali’s classical dance, with its origins in the courts of Sukawati. Gambuh, the grandfather of all forthcoming kinds of Balinese dance theater, was born here. Thus the theme Niru Lampah pays homage to the spirit and artistry of the forefather. The current generation follows in their footsteps – ‘Sebagai generasi penerus, kita harus mengikuti jejak leluhur.’

The objectives of the project were achieved. Students of Sanggar Langlang Jagat had the opportunity to prepare and perform for an audience, thus increasing their skill level. A foreign audience saw a slice of Balinese culture that is rare to find, and reflects the finest and liveliest of Balinese people, thus contributing to cultural preservation and exposure. As ‘trial runs’ for more regular performances at Kaki Bebek Hause, this ‘proof-of-concept’ was effectively based on the positive feedback from the musicians, dancers, and audience members. Finally, we wished for a joyous atmosphere, and this was present during the sharing of tea and snacks, lively socializing post-performance, and engaged the audience during the shows. Kakan-kakan & musicians – assistants to the maidservant (Condong) and princess (Putri)

I Made ‘Cat’ Suteja, ceremonial dancer, teacher, and owner of Rumah Kaki Bebek, came up with the theme ‘Niru Lampah’ when asked. A respected performer for upacara adat and Balinese Hindu yadnya, with frequent invitations abroad, he comes from a long lineage of dancers and painters. He teaches and performs similarly to his father, the maestro I Made Bukel, while also negotiating the changing lifestyle and economic needs of the 21st century in modernizing Bali. “We try to continue the garis, line, or lineage of those before us, trying to learn from their wisdom and respect their wishes.” 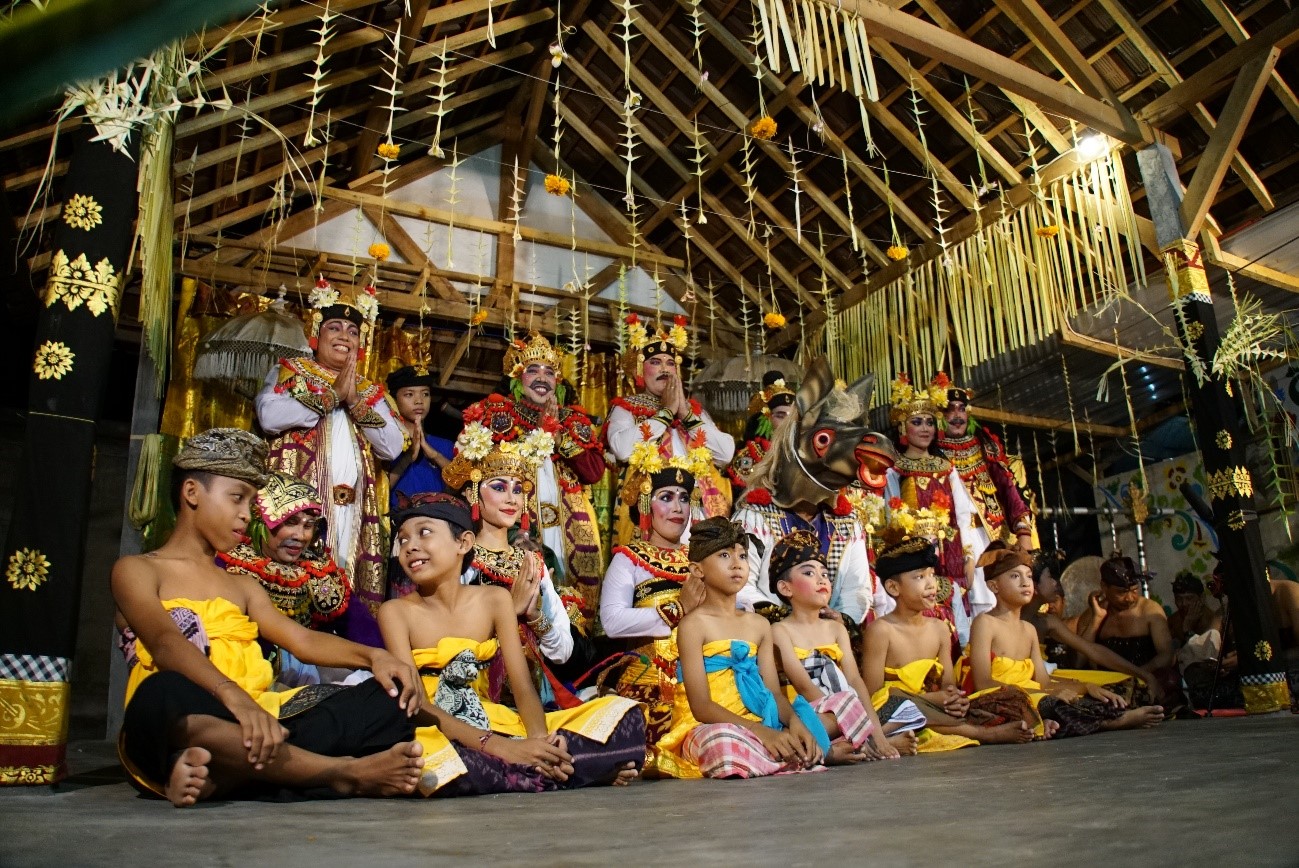 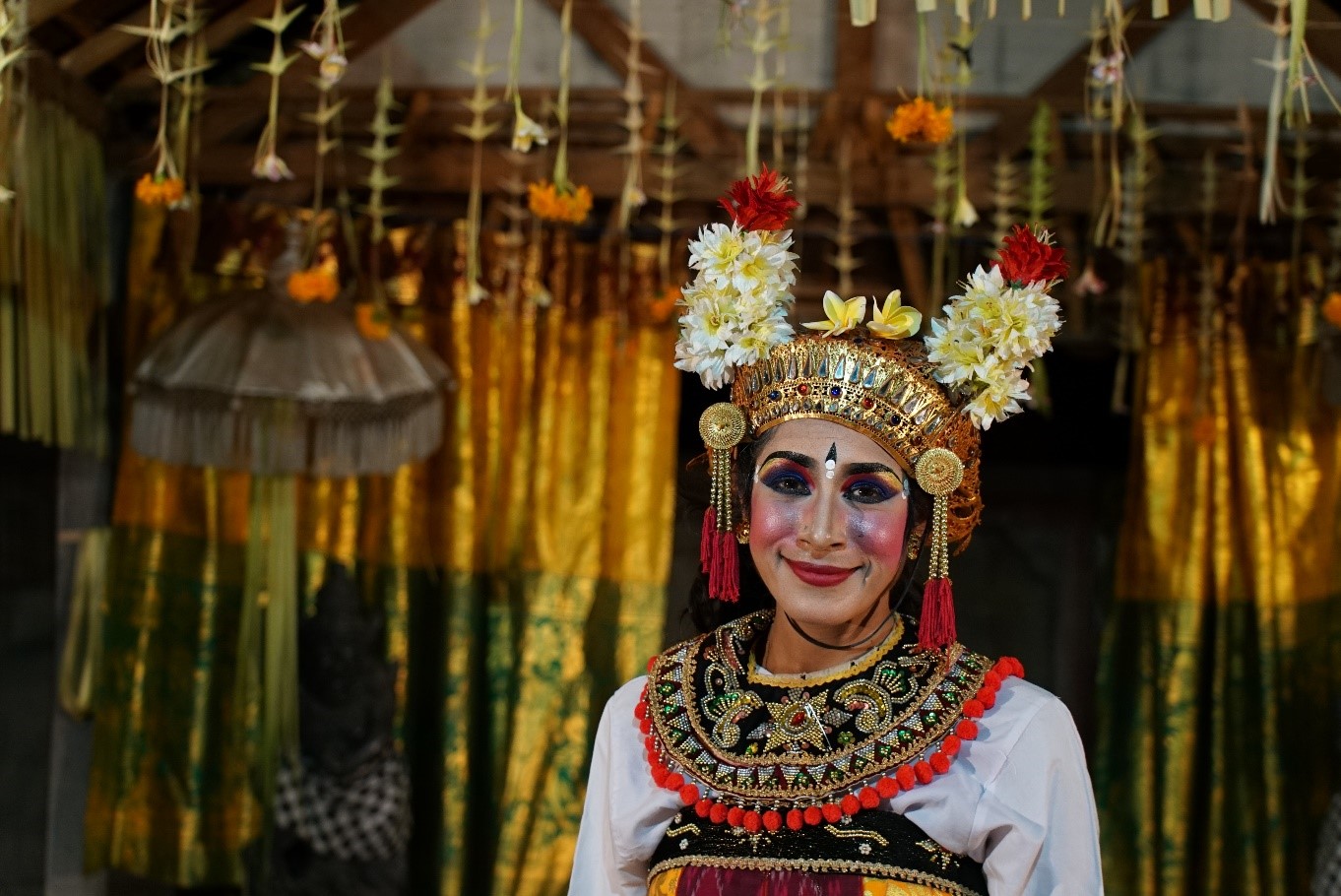 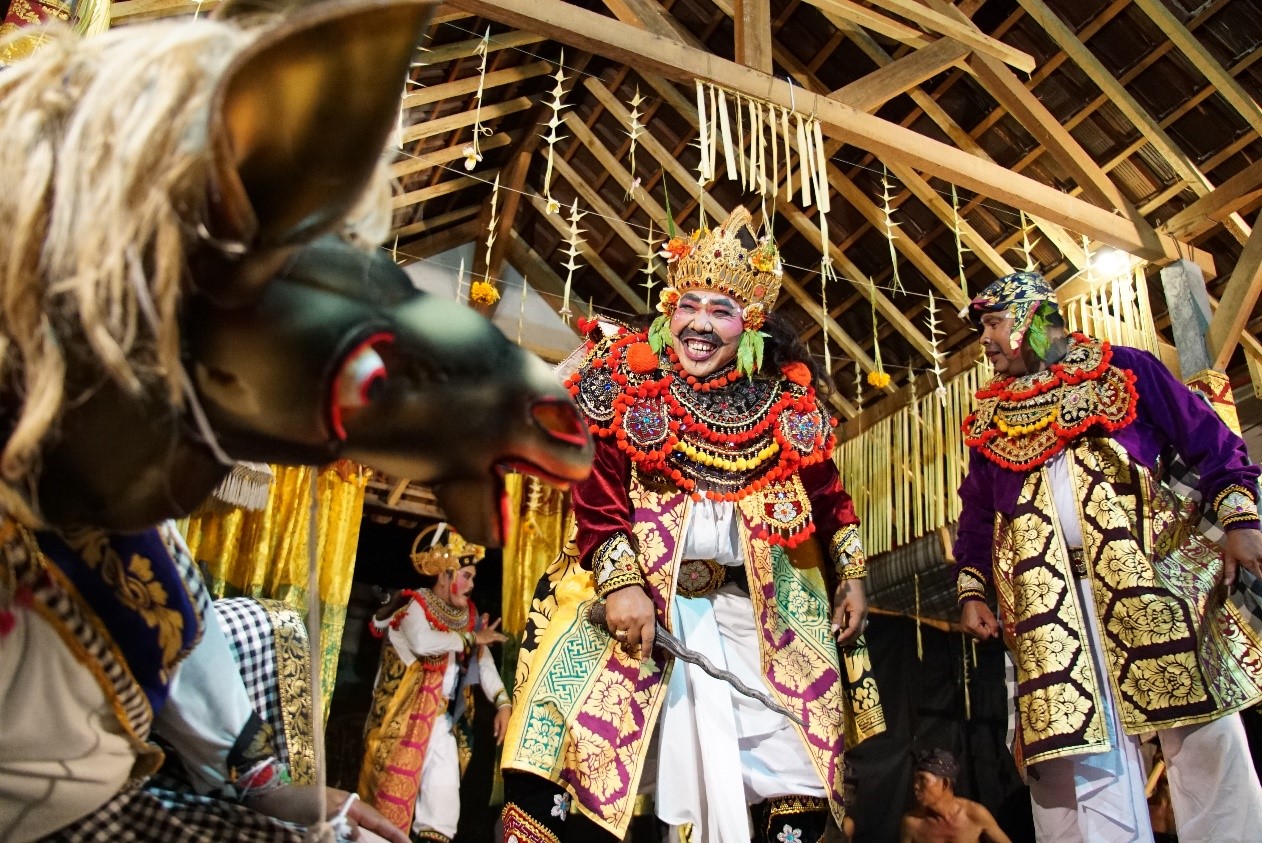 Prabu – I Made ‘Cat’ Suteja 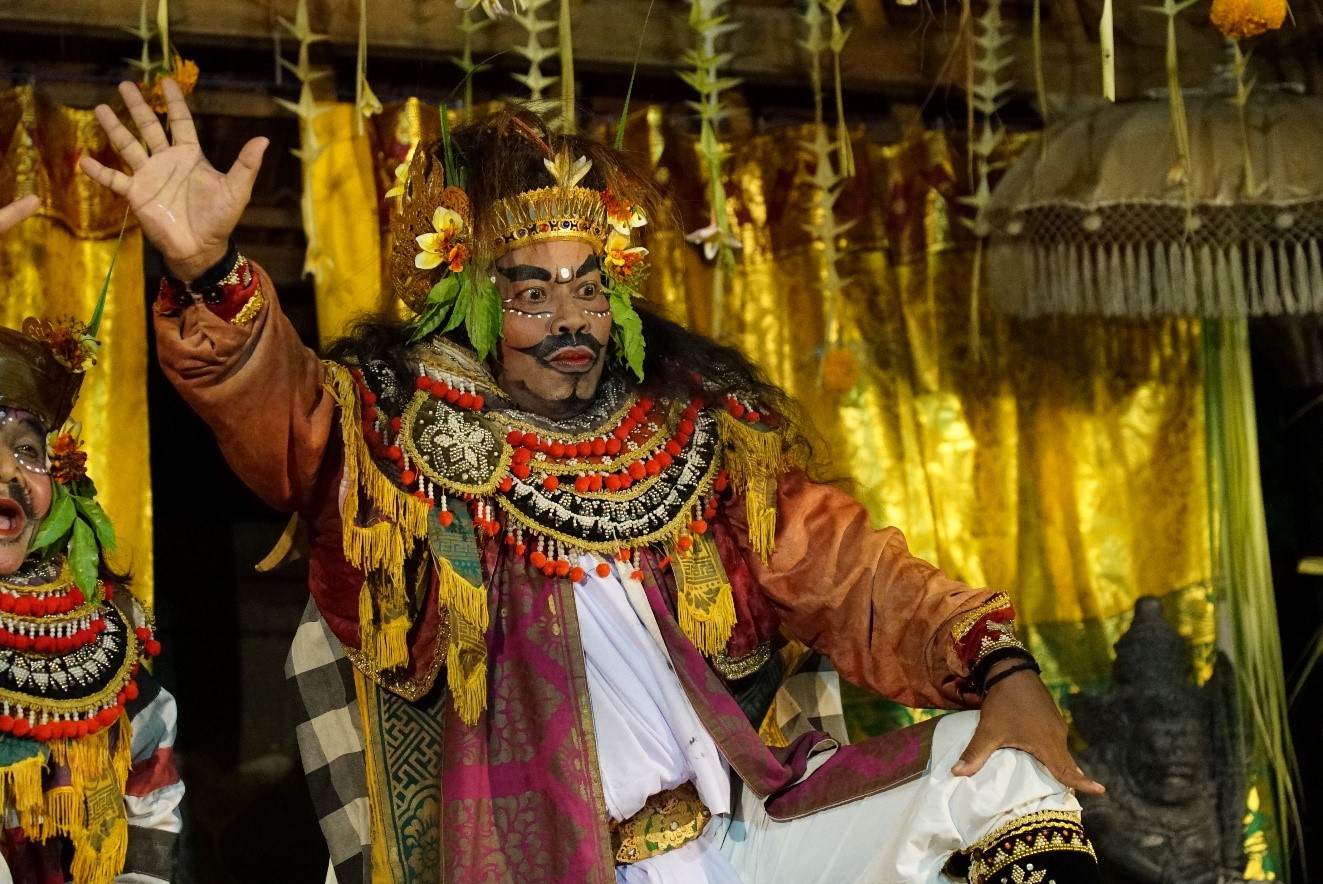 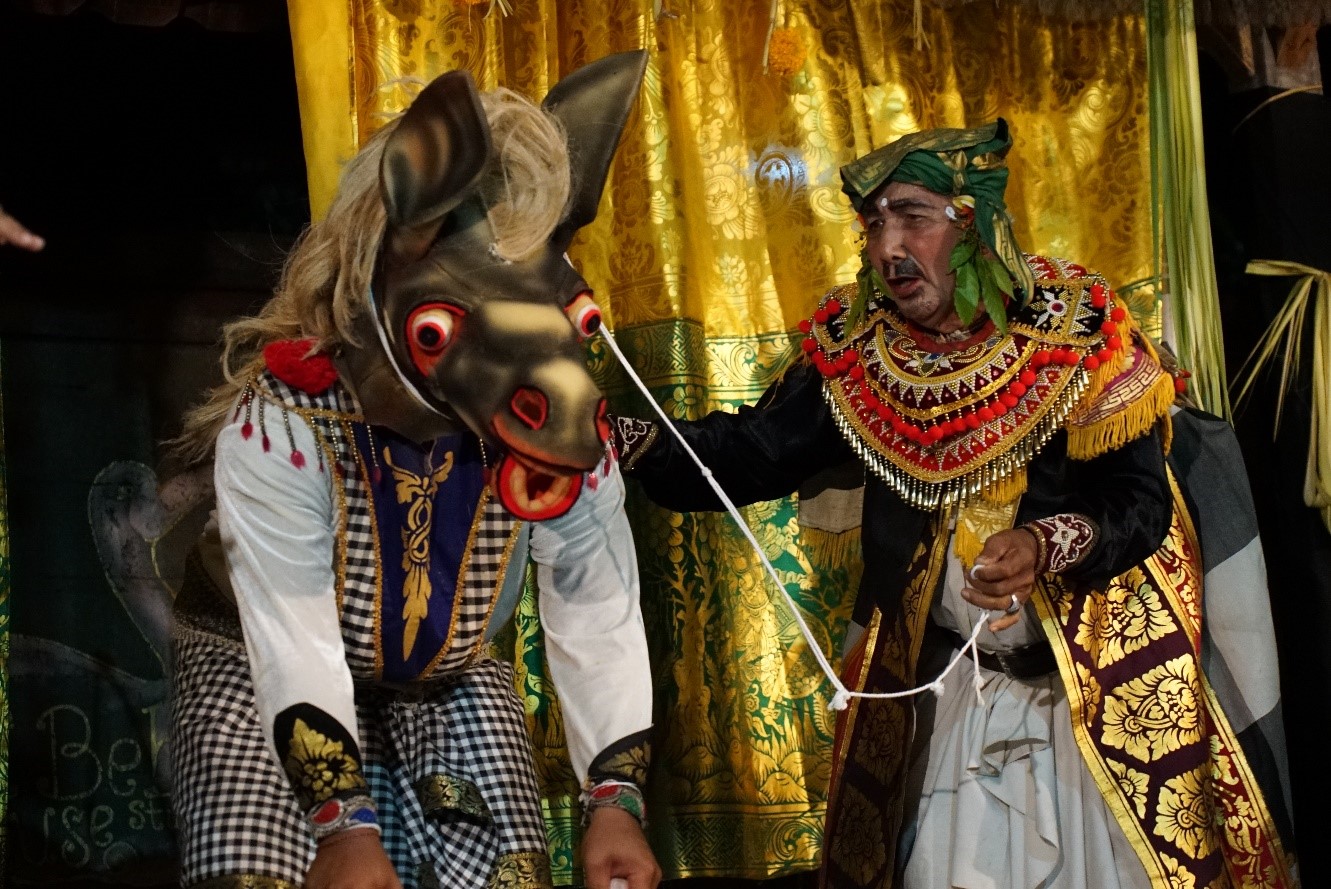 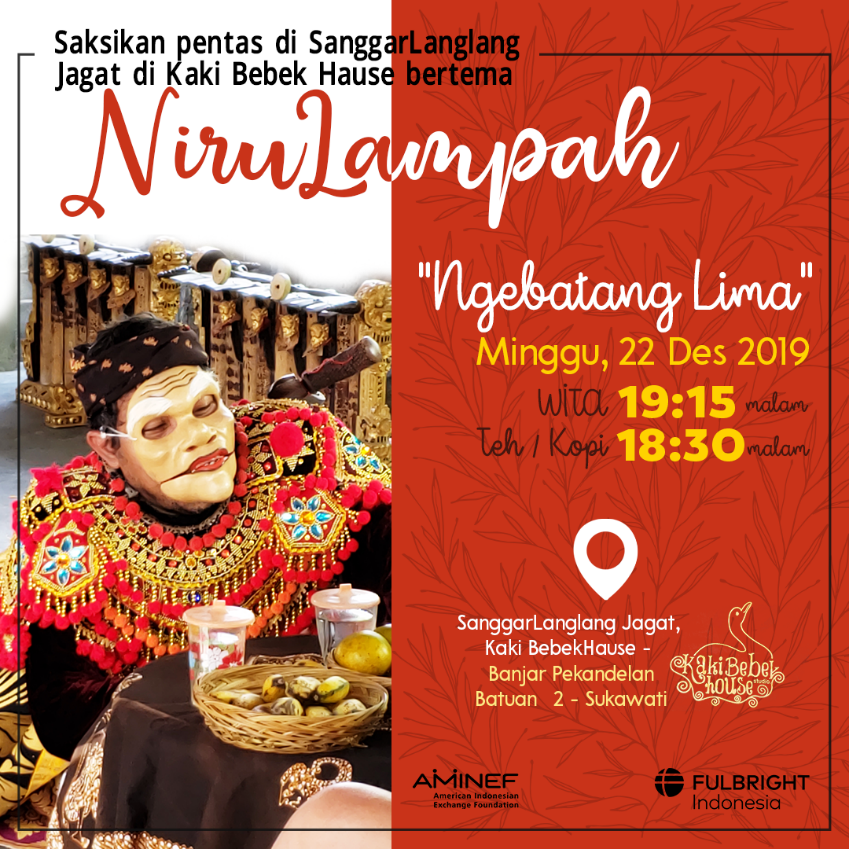 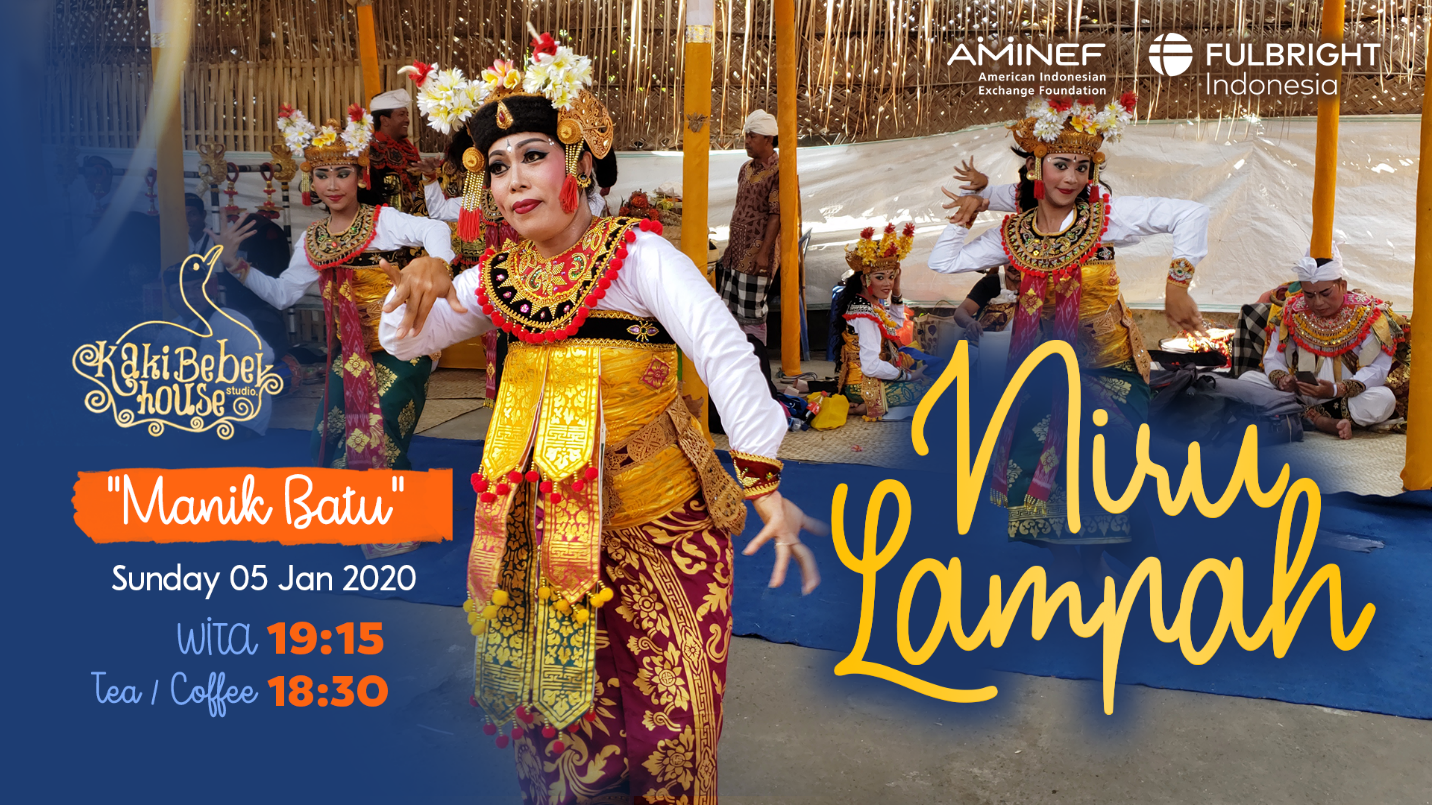