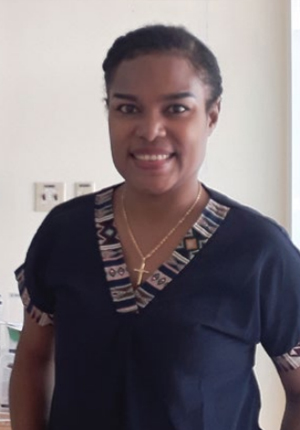 The Indonesian children who watch 34-year-old Novi enter their classroom— dressed in her puffy yellow uniform, red helmet, and heavy boots—also absorb another lesson: a woman can become a firefighter too, just like a man.

When Novi Dimara visits schoolchildren in Papua, she tells them to remember three important words: stop, drop, and roll.

Those three words have the power to save lives when a fire breaks out. Novi learned that key phrase in the United States in 2014, when she grabbed the chance to join the squad at Arlington County Fire Station 9 and study fire science and technology at Northern Virginia Community College. Today, the Indonesian children who watch 34-year-old Novi enter their classroom—dressed in her puffy yellow uniform, red helmet, and heavy boots—also absorb another lesson: a woman can become a firefighter too, just like a man.

Her employers at PT Freeport Indonesia subsidized Novi’s stint in Virginia as a fellow in the State Department’s Community College Initiative Program (CCIP), which is managed in Indonesia by the American Indonesian Exchange Foundation (AMINEF). When she returned, “she was more positive and sure of herself,” reports Jeff Simpkins, the company’s technical advisor on safety. Thereafter, a newly confident Novi persuaded Freeport to investigate each emergency call by dispatching commanders to assess the situation in the field, prior to declaring any incident as a “false alarm.” Before this, a quick phone call might have sufficed.

Born in Jayapura, Novi spent some formative years of her childhood in the remote district of Unurum Guay, where her father served as a police officer. At that time, in the early 1990s, a journey from the city meant riding in a truck for seven hours over terrible roads, then stopping at a bridge and crossing rivers and forests on foot for another seven hours. There was no electricity.

Growing up, she played the same games as the boys did. Together with four brothers, she raced after soccer balls, and batted around tennis balls during kasti, an Indonesian form of softball. Novi also became a strong swimmer, wary of the river’s current. Unlike her cousins, who yearned to become civil servants, Novi settled on a more pragmatic goal. She enrolled in a vocational school to become an electrician, wishing to help villagers enjoy a more comfortable life.

However, climbing tall electrical towers did not come naturally. She was afraid of heights. But she forced herself to keep climbing, 20 meters above ground. With practice, she made it—an early lesson in building courage. Novi applied to Freeport fresh out of school. The company put her to work as a fire technician, as investigations into blazes often involved electrical wiring. But the job did not stop there. Novi was also trained to join an emergency rescue team, and her life took a particularly dramatic turn after 2007.

She rode around in helicopters, lowering herself down on a rope and a sling to rescue climbers lost in the jungle. She helped deliver five babies for women stranded in isolated hamlets. She wrenched off the door of a crushed vehicle and pulled a man to safety after a car accident in a mining area. She didn’t even hesitate to enter a burning house to rescue the pet dog of a Freeport employee.

“When you go to help other people, you have to act like a man, but keep in mind that you are a woman,” Novi says. “It’s important to make the victim feel comfortable.”

A combination of empathy and toughness proved crucial during a tragic episode in Freeport’s history. On the morning of May 14, 2013, the Big Gossan underground tunnel collapsed, about 550 yards from the entrance of the Grasberg gold and copper mine. Thirty-eight employees had been undergoing a training session in the tunnel. With evacuation efforts underway, Novi took calls from distraught relatives at the command center.

Novi handled one call from a sobbing wife, who pelted her with questions: “Can my husband survive? Is it cold there? Will my husband get water to drink?” Novi also found herself in tears. But she forced herself to control her emotions, and spoke slowly and steadily. She told the caller that the company was trying to evacuate the victims as soon as possible, “and asked her to support us in prayers because we would not be successful without the wisdom and blessing of God.” The wife paused, and then told Novi that she would pray for the team.

Ultimately, ten Freeport employees survived the accident, and twenty-eight died. The following year, Novi found some new role models when she went to Virginia. She met two women firefighters at Station 9, and was impressed by their physical strength. She watched one of them hoist a ladder and a fire hose simultaneously, a feat that Novi herself could not manage. That spurred her to request Freeport to install some fitness equipment inside the fire station, so the Papua team could pump iron during downtime.

During an internship at a 911 call center, Novi also admired her boss, an African American woman who “spoke with authority.” She found the call center a more high-tech environment than what she knew back in Papua. Instead of scribbling down information, for example, employees used a keyboard and relied on codes to quickly convey the nature of the emergency.

In her classes at community college, Novi was the only female student. At the start, her language skills lagged behind. Words like “grip”—essential for firefighters—were new to her. But she accepted the suggestion of one professor to improve her English by reading The No. 1 Ladies’ Detective Agency by Alexander McCall Smith, and to put her Indonesian/English dictionary aside in favor of a more comprehensive English/English one. Meanwhile her husband provided plenty of moral support, during frequent Skype calls.

After her return to Papua, Novi decided to name her third child in honor of her US adventure. Aneela Alexandria Virginia was born on January 4, 2016, and her wardrobe includes a tiny gray Tembagapura T-shirt, just like Mom’s.

Freeport colleagues note that Novi displays a special commitment to children and their safety. Together with other graduates of the Community College Initiative Program, she participates in a social service group called Look At Me Papua (LAMP). In December 2015, for example, LAMP organized a Christmas gift drive and collected a variety of toys and school supplies. But due to a tribal conflict, a group of 100 children couldn’t venture outdoors to go to school and collect their gifts. Novi got special permission to hold the event at her fire station, even though it took some effort to cut through the red tape, according to Boby Yulianto Yomaki, a leadership instructor at Freeport.

Novi asked the male firefighters to clean and decorate the station, which they did without complaint. It was more evidence of the respect that Novi has earned from her male colleagues. “It’s the way they speak to her, and treat her. I can see that they don’t look down upon her,” he adds. The team escorted the children to the venue, and home again. Hopefully, none of them will ever need to drop to the ground and roll to safety through menacing flames.

Another Freeport employee, Frits Worabay, says that he finds Novi’s “professionalism and caring” quite inspiring. Her success in obtaining a fellowship motivated him to keep studying, he says, and thus he had the chance to attend Northampton Community College in Pennsylvania in 2016–2017 under a CCIP grant.

Recalling her substantial Thanksgiving dinner in Arlington, Novi now likes to celebrate the holiday with her colleagues at Freeport. As for CCIP, she dishes out advice all year round. “I keep telling everyone, especially my Papuans, this is the big opportunity that you have to take. The world is not that small.”