For a peaceful society, Indonesians must stop using the word kafir (infidels) to describe non-Muslims

In the world’s most populous Muslim majority, this decision in NU’s recent national meeting has triggered public debate all over social and mass media.

As a religious studies expert whose research covers interfaith dialogue, tolerance and religious freedom, I hope this leads to meaningful discussion for a better democratic life in Indonesia.

The Indonesian government recognises six religions. According to the 2010 census, around 87% of the population are Muslims. Some 6.9% are Protestants, 2.9% are Catholics, 1.7% Hindu, 0.7% Buddhist and 0.05% believe in Confucianism.

NU has explained that the organisation’s call for an end to the word kafiris a response to a number of discrimination cases against Indonesian non-Muslims.

The public is divided on the NU’s decision.

Those who disagree with NU’s recommendation have questioned its religious foundation. They wonder why are there Muslims who are disturbed by the terms used by God and His Messengers. “Do they want to replace all the kafir words in Al Quran and its provisions? What kind of Muslims are they?” said the opposing group.

Those who agree with NU argue that this recommendation was not made to negate the use of the word as a theological concept that differentiates believers from unbelievers.

They argue that NU recommended people refrain from using the word kafir in the context of relations between citizens. Though the majority of Indonesians are Muslims, the country is not an Islamic state. Therefore, they agree with NU that a theological category from Islam should not be applied.

Aside from the religious foundation argument, the opposing group has also argued that Islam has suffered from discrimination at the hands of the state and therefore they believe the use of word kafir is justified. They point out that the police have accused many Islamic clerics of being radical figures or even terrorists and that the current government is highly suspicious of Islamic movements.

The government has banned radical group Hizbut Tahrir Indonesia. Many clerics have been criminalised.

In contrast, those supporting the recommendation do not agree that Muslims in Indonesia are facing injustice.

They point out that Muslims in Indonesia have enjoyed all kind of privileges in different forms. Since the 1990s, Muslims have increasingly dominated the bureaucracy and strategic positions at local and national level. Islamic attributes are widely used in the bureaucracy and public spaces. And Aceh, the westernmost Indonesian province that enforces sharia laws, recently required female flight attendants to wear a hijab when entering Aceh.

Why should we refrain from using the word kafir?

Using different perspectives, I will try to counter the arguments from the opposing group.

1. Use of the word kafir cautiously

I do not deny that the word kafir is essential in Islam. There is a particular chapter in the Quran called Al Kafirun  to refer to the infidels.

However, the Quran, in Al Baqarah verse 62 and Al Maidah verse 69, also recognises adherents of Abrahamic religions, Judaism and Christianity, as believers.

Al Hujurat verse 14 also says that “being Muslim” is not identical with “being a believer”, when “the faith has not yet entered into your heart”.

Conceptually, the word kafir refers to someone who rejects or is against God’s truth. He or she can be of any religion or belief.

2. Refusing the demands of political Islam

Certain Islamic groups are refusing to stop using the word kafir due to their political interests. The argument that Islam is victimised and oppressed, in Indonesia, is only used by these groups to push their political agenda.

The desires of these groups vary. Some want the state to prioritise the interests of Islam as the majority group as voiced by the Islamic Defenders Front (FPI). Others want the establishment of an Islamic state. Although they think they act on behalf of religion, their actions are politically oriented.

These political Islamist groups use religion to support their interest. They were behind the rally to defeat Chinese-Christian Basuki “Ahok” Tjahaja Purnama in the 2017 Jakarta gubernatorial election and send him to prison. 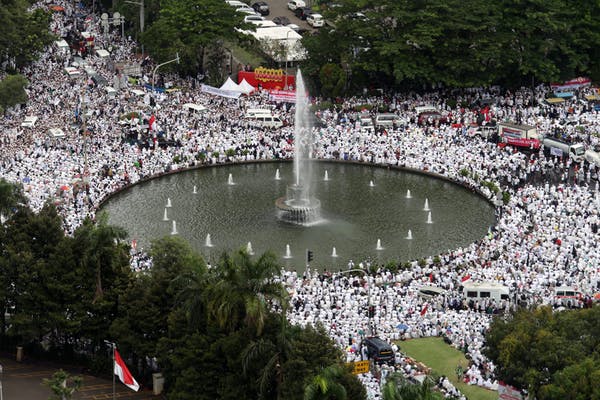 For a plural and peaceful Indonesia

In a democratic Indonesia, the use of the word kafir to refer to non-Muslims may result in the latter being treated as second-class citizens. This tendency seems to be getting stronger lately.

In line with ideas promoted by prominent Islamic scholars such as Gus Dur and Nurcholish Madjid, religion should be a moral compass to create a just, tolerant and peaceful society where people can live a dignified life.

Islam must be a blessing to the universe. Indonesian Muslims should be part of the solution, instead of triggering conflicts and divisions in society.

As the majority group, Muslims in Indonesia should actively reach out to and work with others in overcoming the problems of the nation.

In a plural society that adheres to a democratic system, the way we treat a minority group is a measure of the health of our social relationships. Contextually, NU’s recommendation to stop using the word kafir is a constructive effort to establish equality and justice for every citizen to build Indonesia as a home for everyone.

The article originally appeared in theconversation.com on March 22, 2019