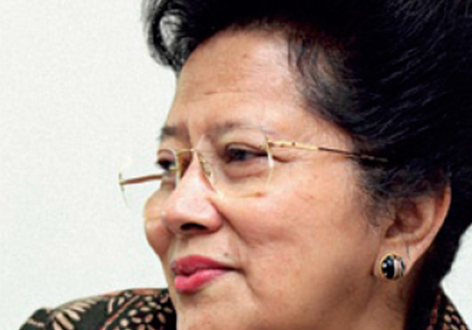 If she could be born again, what would Pratiwi Sudarmono do? “Study microbiology again!” she said. “Microbiology is the key to overcoming health problems and most important for understanding life.” When microbiology is understood and developed, it is not limited to the earth; it also has application in outer space, which is why Pratiwi is eager to conduct research anywhere.

Pratiwi Pujilestari Sudarmono was born in Bandung in 1952. She was selected to join the Fulbright New Century Scholar Program for 2001 – 2002. In this year-long worldwide program, participants from many countries come together as Fulbright scholars to discuss and find solutions for global problems. Pratiwi’s research focused on finding a breakthrough in improving global health.

“Many health problems stem from lack of education,” she said. She cited the practice of isolating women when they are giving birth. In East Nusa Tenggara, for example, in several remote districts it is the custom to put mothers in a room by themselves separate from the rest of the family during childbirth. “I visited one village and tried to enter the space for the mother that was so narrow it was difficult to breathe inside,” she said, adding that she could only go in through a small door. Wood smoke filled the room, and the mother and baby were unbathed, receiving no help at all. Food was delivered through a small hole. Often the baby and even the mother die in such conditions.

It was clear that this situation was not healthy. Pratiwi provided education in order that the practice could be stopped. But she was contacted by one local official who said, “My mother and I experienced the same conditions. But look, obviously now I have been able to become a district head. Indeed, there are those who have even become a governor as well as a minister.”

The answer infuriated Pratiwi. Fortunately, there are always ways to raise awareness, she noted, however much the prevalence is for the infant and maternal death rate during childbirth to be extremely high. This is what must be stressed: it can be lowered.

“Within the last ten years, the health conditions have improved in East Nusa Tenggara, and the case has become a lesson for the international community.” The vice dean of the University of Indonesia Faculty of Medicine said she is happy working in poor areas in her homeland. She is also pleased to receive Fulbrighters from America. “They get a chance to learn a lot in Indonesia. Here the opportunities to study new things are wide open,” said the scientist who was a much-talked about astronaut in the 1980s.

In October 1985, Pratiwi was selected by the U.S. National Aeronautics and Space Administration, NASA, to join a space shuttle mission into outer space. Pratiwi was scheduled to fly in the Columbia in June 1986, but it was canceled after the disaster of another shuttle, the Challenger, in January of that year. Despite the turn of events, however, Pratiwi kept working at NASA in the United States for some time.

With her strong capabilities and vast experience, the professor of microbiology can readily find work in any developed country. “Research can be done anywhere. But, in fact, I enjoy teaching and researching more here,” she said.

Commenting on the Fulbright program, Pratiwi said “The development and improvement of the quality of human resources through scholarships first and foremost should be aimed at helping people to discover, to love, and to develop their world. With faith, of course, added the expert on global health who is devoted to local projects.

This article appears from the book of Across the Archipelago, from Sea to Shining Sea Commemorating the 60/20 Anniversary of Fulbright and AMINEF (Page 165– 167) published in 2012.