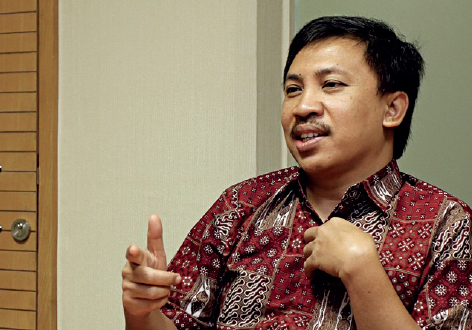 A Fulbright scholarship, as it turns out, made Putut Widjanarko love Indonesia more. “I grew more aware of the needs of our people for education and books,” he said. Putut arrived in the United States in August 2001, just days before the attack on the World Trade Center occurred.

“The state of mind of Americans changed instantly,” he said. “Children who were playing in the yard were called quickly into the house. My professor, William Frederick, said he could not teach that day, because his thoughts were disturbed. America has never experienced as big a surprise as this.”

The residential area where Putut and his family lived in Athens, Ohio, was immediately under guard by police. It so happened that many Arab families lived in that area. Many students from Asia and the Middle East felt that their safety was less certain. “Luckily, a lecturer, Mrs. Collins, voluntarily escorted Indonesian students who wanted to go shopping,” he said.

Nevertheless, with the Fulbright scholarship Putut stayed until 2003 together with his wife, who gave birth to their child there. He earned a master’s in media studies from the College of Communication at Ohio University, with a thesis entitled, “Mapping Notions of Cyberspace: Optimism, Skepticism, and the Issues of Identity and Spirituality.”

Putut, the eldest of six children, was born in Kediri, East Java, in 1965. At only several months old, he moved with the family to Karanganyar, near Solo, in Central Java. His father, a bookstore owner, created a special library for the family. It was this that opened Putut’s horizons about developing the book industry in Indonesia. Since 1993, he has been a part of Mizan, a leading publisher.

Putut Widjanarko’s name is closely associated with the success of the movie “Laskar Pelangi,” which was watched by more than 4.7 million viewers, the highest ever achieved in Indonesia. It invites people to care about education and respect the services of teachers in rural areas. Putut’s name was also behind the publishing of part of the dissertation of Ann Dunham, the mother of U.S. President Barack Obama, concerning the problems faced in the lives of the rural poor.

Putut himself began his education in physical engineering at the Bandung Technology Institute, because he likes physics. He then went on to receive his first master’s at the School of Management. Shortly after completing his second master’s program in Ohio, he returned to Ohio to undertake a doctoral program in mass communications at the Scripps College of Communication. He achieved his doctorate in 2007, with a dissertation, entitled, “Homeland, Identity, and Media: A Study of Indonesian Transnational Muslims in New York City.”

His wife, Elin Driana, was also busy submitting a dissertation for her doctorate in education at the same time. Putut and Elin, as husband and wife, graduated together, which Putut said was the most profound and moving experience he had while studying in America. Now they are both fighting for the ideals to develop Indonesians to become highly educated and live modern lives.

“Through books and movies we can make known the life of Indonesian Muslims who love peace and uphold harmony,” he said. Does Putut want to show his country the way America promotes its culture through the Hollywood film industry? “We have not thought of that. But the films that we produce have begun to receive a lot of attention in various festivals abroad,” said Putut. He explained that the education in communications he obtained, thanks to the Fulbright Program, deepened his love for Indonesian people, society, and culture.

This article appears from the book of Across the Archipelago, from Sea to Shining Sea Commemorating the 60/20 Anniversary of Fulbright and AMINEF (Page 171– 173) published in 2012.