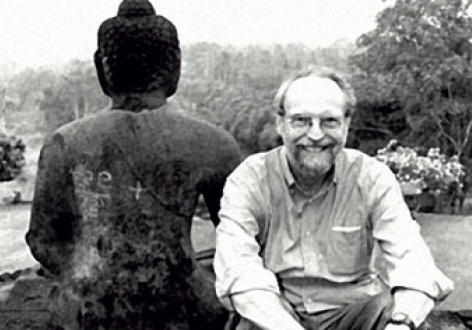 The Place to Be

For a political scientist in 1959, when I was entering graduate school, Southeast Asia was one of the places to be. John Kennedy was about to be elected president, the Peace Corps was about to be started; the excitement in the world was in these places that were ex-colonial. And in Indonesia you had one of the largest countries in the world, one that could play a role on the world stage. Even then you could imagine Indonesia as a BRIC. And when I was choosing my research focus, I remember thinking that if I got kicked out of Indonesia — that because of Sukarno, it might be hard to study politics in Indonesia — then there was Malaysia. But then once I got started with the language and the history and so forth I was hooked right away by Indonesia.

Two things happened to me because of Fulbright. First, it allowed me to make my first return to the region after conducting my dissertation research. I’d been in a small town in North Sumatra conducting anthropological-style political science research from 1962 to 1964 and right after that I went to the University of Chicago to study with the anthropologist Clifford Geertz. And then I got my job at Ohio State University and I was writing my dissertation and so forth, so by 1967 I was feeling pretty detached from the region. Of course what happened in Indonesia in 1965 – 1966, I didn’t see. I was far away, there was no Internet. And the first opportunity to come back was a Fulbright grant in Singapore. I was funded in 1968 – 1969 to teach at the old University of Singapore, and I was thrilled to get the opportunity. There’s so much intellectual traffic in Singapore, with scholars and others passing through. And I was a Southeast Asianist, so I was teaching about Indonesia and the region that entire time, deepening my understanding of Indonesia.

After that the next opportunity to come to Indonesia for a significant length of time — two years — was this program in Aceh that Fulbright was funding. It was originally an idea from Geertz, who wrote a proposal for the Ford Foundation, selecting master’s level faculty in social sciences who had never done any field work and putting them anthropology-style in a research center for a year in Ujung Pandang (now Makassar) or Banda Aceh. I’d wanted to do it for many years but the funding had not been available, so when I saw Fulbright was funding it I really jumped at the chance.

It was at this time also that I began my secondary career as a writer of op-ed columns for Tempo, Kompas, The Asian Wall Street Journal, The Far Eastern Economic Review, and other newspapers and magazines. This would not have been possible had I not been living in the region.

The other side of it all is my students who have had Fulbright grants. Some I actively recruited, like Rizal Mallarangeng, who was at UGM in Yogyakarta. Djayadi Hanan is the current and last one. There are at least half a dozen people who got Fulbright grants to come to Ohio State, and that’s been immensely important for my ability to train Indonesians to be scholars and to contribute to the development of political science in Indonesia. Ohio is not like Singapore; you don’t have people passing through all the time. I had to go out and get them.

I have been an Indonesianist for a very long time. In America, too, my life is very influenced by my Indonesian connections and work. I have Indonesian students to whom I speak in Indonesian. And I have been at Ohio State, studying and teaching about Indonesia, for 47 years.

As I look back on my career, I can see that I have always had this basic notion that Indonesia and the United States are easy to compare. They are both modern, self-created countries. Not like Japan, or France, or Germany, whose people claim common ethnicity or descent from a single ancestor; Indonesia is a made-up nation of people who just want to be together, as we are in the United States.

This article appears from the book of Across the Archipelago, from Sea to Shining Sea Commemorating the 60/20 Anniversary of Fulbright and AMINEF (Page 174– 176) published in 2012.