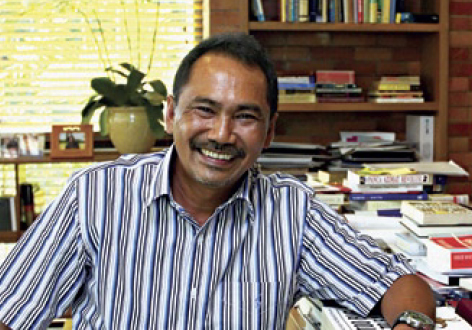 “A nation is not respected because of its gold or oil, but for its development of scientific knowledge,” said Rizal Mallarangeng at his office at the Freedom Institute’s public library on Jalan Proklamasi in Jakarta. For this admirer of Abraham Lincoln, the moment he received the Fulbright scholarship was “one of the best times in my life,” he said.

“It gave me a new foundation on which to develop my life. The most fundamental change for me was that Fulbright instilled within me a love of information and of education for the wider community. The most applicable lesson was to open a library like this one.”

He wants to build a society that emphasizes scientific knowledge. On Jalan Proklamasi in Central Jakarta, the library he manages has a collection of more than 12,000 books and subscriptions to 30 journals. He founded the library in 2001 as the nation’s first public library managed by a private institution. Quoting from the poem by famed American poet Robert Frost entitled “The Road Not Taken,” Rizal said, “I took the one less traveled by.”

Rizal is proud to be “the fifth disciple” of R. William Liddle professor of political science at Ohio State University (OSU). After he returned to Indonesia from his study there, Rizal’s ambition was to foster a passion for learning in the society. “The centers of information should be revived,” he said, “such as the American Corner at the Gadjah Mada University library, where I used to study.”

Born in Parepare, South Sulawesi, in 1964, Rizal is a political observer and lover of literature. In his spacious office, he has posters of U.S. President Barack Obama and the famous Indonesian poet Chairil Anwar.

On his desk there are three of the many books he has written: Breaking Indonesian Economic Centralism, 1986 – 1992, Media of the New Order, and a 660-page collection of essays about humankind, society, and power, entitled From Heaven, featuring an introduction by the acclaimed journalist Goenawan Mohamad.

Rizal, who in his childhood was called Celli, is active in the fields of politics, journalism, and civil society. He was once special staff to the minister of the Coordinating Ministry for People’s Welfare of the Republic of Indonesia. In 2008, with his brother Choel Mallarangeng and several close friends, he founded Fox Indonesia, a political consulting agency. That same year he made a bid to run in the 2009 presidential election. Indeed, while his effort to move forward as an independent candidate did not succeed, his appearance on the ballot lent a fresh new face to the process of democratization in Indonesia. He said his experience was much inspired by Barack Obama’s election in the United States.

Yet another inspiration has become an obsession for him. “The nation’s capital should be the nation’s center of scientific research and information,” said Rizal. “If we look at the American capital, Washington, DC, we see that government departments there have access to large libraries and research centers, such as the Library of Congress and the Smithsonian Institution, as well as to a wide range of museums.”

There is nothing wrong with Indonesia striving to emulate the positive aspects of America, he said. For example, he recalled how diligently he had to prepare himself each day as a teaching assistant in comparative politics at OSU. “Before you teach, you have to be really ready, because the students are quick to criticize.”

Rizal, who is the great-grandson of the last war chief of the Bone kingdom, now conducts most of his scholarly activities in Jakarta. On weekends he often ventures to the slopes of Salak Mountain in Bogor, where he farms white oyster mushrooms and raises goats. This is an example he has taken from American leaders, many of whom, their political activities notwithstanding, remained close to the land and to nature.

This article appears from the book of Across the Archipelago, from Sea to Shining Sea Commemorating the 60/20 Anniversary of Fulbright and AMINEF (Page 177– 179) published in 2012.