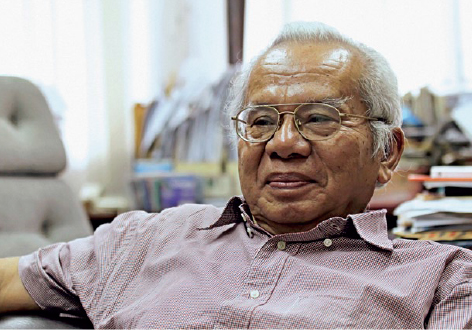 The Work Ethic of a Scholar

Taufik Abdullah could not have imagined receiving a Fulbright scholarship and studying at Cornell University when he was young. Born in Bukittinggi, West Sumatra, in 1936, he has always been interested in the Western world. He graduated in 1961 from Gajah Mada University (UGM), Yogyakarta, with a thesis on the history of European nationalism. However, his career took off with his prolific research on the Minangkabau.

The Fulbright scholarship awakened in him an interest in the richness of his own origins, the beauty of Siti Nurbaya and the strength of Tambo, the oral history of the Minangkabau people. He earned his master’s degree at Cornell University with a thesis on the social development of the Minangkabau in 1967. Three years later, he received a doctorate at the same university with a dissertation entitled, “School and Politics: The Kaum Muda Movement in West Sumatra, 1927 – 1933.”

Taufik is a prolific speaker, skilled researcher and active writer. Developing a work ethic as an intellectual and scholar was the most important lesson he took from his Fulbright Asian Scholar-inResidence (ASIR) experience. “Even now, scholarships to foreign countries are needed to strengthen Indonesian intellectuals,” he said. The experience of studying at Cornell gave him a stronger sense of responsibility toward teaching and assessing students more closely. “My professor, Oliver Wolters, would always open the thesaurus to find the exact right word and to better understand the meaning of each word along with its root and synonyms. I also cannot work without this little book,” he said, pointing to the thesaurus on his desk.

Taufik worked at the Indonesian Institute of Sciences (LIPI) after graduating from UGM, leading the institution from 2000 to 2002. As a researcher and social activist, he also conducted research at the Faculty of Political Science at the University of Chicago, the University of Wisconsin, and the Netherlands Institute for Advanced Studies in the Humanities and Social Science (NIAS) in Wassenaar.

Another important experience that greatly impacted Taufik’s life was learning about life in a democracy. While studying at Cornell University, he saw how the students demonstrated to protest the Vietnam War, leading to, at one point, student occupation of the campus. This was the time when the youth culture blazed with the spirit of “Don’t trust anyone over the age of 30.”

This anger and resentment at the older generation was largely what sparked Taufik to explore the history of the Minangkabau. “Actually, the reason I chose to research the Minangkabau came out of anger. It was as if Indonesian history had only happened in Java. At the time no one had studied the history and sociology of the islands of Sumatra, Kalimantan and others.”

Taufik has served as the chairman of the Executive Committee of Program Studies of the Institute of Southeast Asian Studies (ISEAS) in Singapore; vice president of the Association of Social Sciences of Southeast Asia in Kuala Lumpur and vice president of the International Sociological Association (ISA) Research Council for the Sociology of Religion. He has written some 30 books, and in 2009 received an honorary doctorate from the University of Indonesia.

Taufik has also often been invited to teach at various universities in the United States and other countries. “John McGlynn, the well-known American translator based in Jakarta, was a student of mine in Wisconsin. I remember once that he did not want to write a five-page paper on why he was interested in studying Indonesian literature. Instead, he chose to answer two of five questions that I gave him, and he took 15 pages to answer each question. So, he refused to write five pages, but instead wrote 30.”

Taufik concluded that the most important thing to give students is an opportunity to think and express themselves freely, and that what Indonesian academics need is the joy of thinking and learning independently. Through Fulbright, Taufik also felt he experienced a personal transformation. One of his famous professors, Claire Holt, said upon seeing him after many years: “Thirty years ago, I met a student who was quiet and shy. Where is that person now?”

It is these experiences that drive Taufik to push for more Fulbright scholarships. He wants Indonesia to have scholars who are not shy and reserved, but who work seriously and joyously and who love their homeland even more.

This article appears from the book of Across the Archipelago, from Sea to Shining Sea Commemorating the 60/20 Anniversary of Fulbright and AMINEF (Page 192– 195) published in 2012.