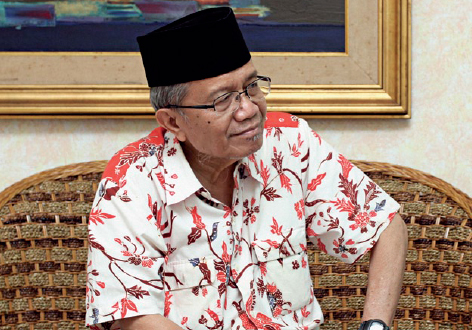 The Night Snow Fell on the Lake

America opened the door for Taufiq Ismail, born in Bukittinggi, to achieve his dream of becoming a poet. Long before he became a Fulbrighter in 1991 – 1992, he was among the first batch of 1956 – 1957 Indonesian AFSIS (American Field Service International Scholarships) exchange students, departing from Pekalongan high school and going to live with the Archie Werrbach family in the village of Whitefish Bay, Milwaukee County, on the western shore of Lake Michigan.

During his spring break, Taufiq worked with a farm family who owned a cow pasture, and it was at this time that he made an important decision in his life, which was to earn his livelihood by becoming a veterinarian and a livestock expert. His foremost dream, however, was to create literary works as a writer.

His adopted mother, Helen Werrbach, was a lover of poetry, and Clara Czarkowski, his special high school literature teacher, became very dear to him. In Whitefish Bay High School, he was introduced to and fell in love with the work of Whitman, Poe, Frost, Dickinson, Melville, Crane, London, Hemingway, and Steinbeck. Taufiq was intoxicated with literature. For an assignment from Mrs. Czarkowski, he wrote reviews about “Annabel Lee” (Edgar Allan Poe’s poem) and The Old Man and the Sea (Ernest Hemingway’s novel).

One night, Daddy Archie took him out in the Chevy when the snow was falling beside the shore of Lake Michigan. He aimed the car lights at the surface of the lake. “Look carefully at that snow fall,” said Archie, “there is nothing like this in your Pekalongan.” Taufiq was grateful to God for the opportunity to enjoy watching snow fall on the lake that night. He remembered in the beautiful poetry of Robert Frost scenes of snow falling and covering the forest.

When, thirty-four years later, he received an opportunity through a Fulbright grant to work on translating American poetry, Taufiq chose the right place, the University of Iowa in Iowa City. There he worked with eight of the country’s leading poets in the International Writing Program.

Taufiq translated the works of 160 American poets, a total of 728 pages of poetry, followed by their biographies, that covered the period 1850 – 1980, spanning over 130 years. He also translated 27 oral poems and the lyrics of cowboy songs. A translation of poetry as large as this had never been done in Indonesian. The collection was entitled Rerumputan Dedaunan (Leaves of Grass), inspired by the title of Walt Whitman’s (1819 – 1892) renowned poetry collection, Leaves of Grass .

In undertaking this work he was grateful to the poet, professor, and founder of the International Writing Program, Paul Engle, and his wife, novelist Hualing Nieh Engle, as well as to the Translation Workshop poets and professors: Daniel Weissbort, Gerald Stern and Jorie Graham, Fredrick Woodard, Peter Nazareth (African-American poetry) and Ken McCullough (Native American poetry). They were all very supportive and enthusiastic about his poetry translation project.

However, the publication of Rerumputan Dedaunan as a book was held up. The main barrier was acquiring the rights, which is a complicated and expensive procedure. The publisher Taufiq contacted was unable to handle it. Meanwhile, 20 years went by very fast. The solution was thus to publish the Rerumputan Dedaunan collection as a non-commercial work report.

In addition to AMINEF in Jakarta, a number of copies of Rerumputan Dedaunan were given to the University of Iowa Translation Workshop, the U.S. Library of Congress, and the Departments of American Studies in several universities.

Taufiq Ismail is grateful to the Fulbright Program through AMINEF, namely, (USIS director) Mike Yaki, (AMINEF director) Ann Lewis, and (AMINEF board member) Pia Alisjahbana, who, in 1991, approved the grant for him to conduct this translation project as a Senior Fulbright Fellow at the University of Iowa in Iowa City.

This article appears from the book of Across the Archipelago, from Sea to Shining Sea Commemorating the 60/20 Anniversary of Fulbright and AMINEF (Page 196– 198) published in 2012.