Who’s running on Islam in Indonesia? 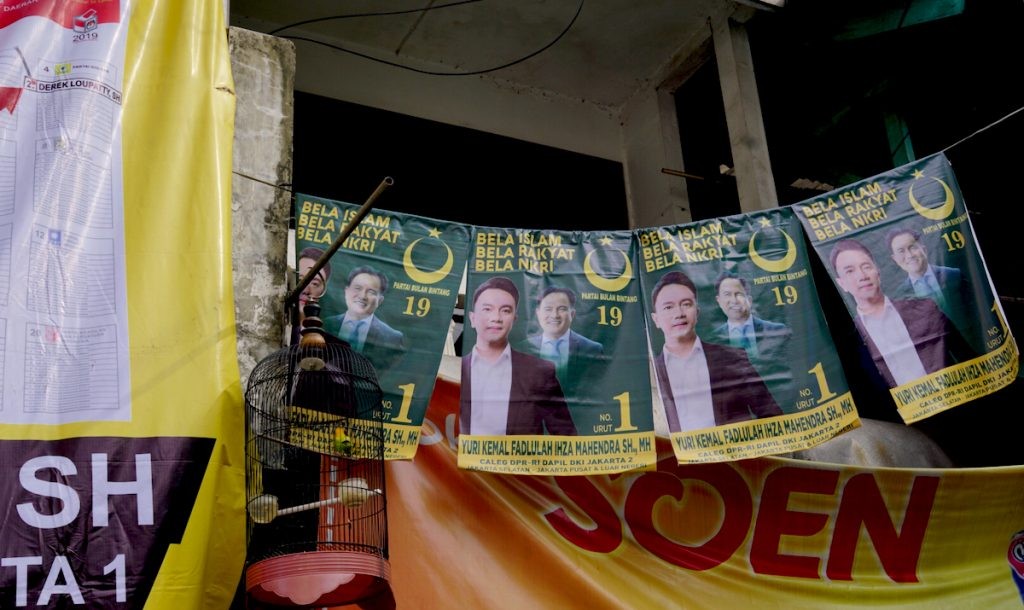 In a recent op-ed, the acclaimed Indonesian novelist Eka Kurniawan announced that, whatever the outcome of the upcoming Indonesian national election, “the Islamists have won.” Chief among their victories was President Joko Widodo’s decision to include Ma’ruf Amin as his running mate, a religious cleric with a history of intolerant statements towards minority religious groups. The inclusion of Amin on the president’s ticket indicates a shift in Indonesian politics, he said, where the centre will be increasingly characterised by religious rhetoric. According to Kurniawan, the decisive issue in the new political climate in Indonesia will be candidates’ commitment to Islam.

Few would deny that religious rhetoric has become normalised in Indonesian presidential politics. But Indonesians are not only voting for presidential candidates on 17 April 2019: voters will also elect approximately 20,000 candidates for positions in district, provincial, and national legislatures. There are 241,036 candidates running for these seats. Even members of district legislatures can be powerful actors. District legislatures, for example, have been an important force behind a reported increase in the number of local sharia laws. In recent co-authored work with Gareth Nellis and Michael Weaver, I have also found some evidence that increases in the number of district legislators from Islamist parties is associated with increases in the incidence of religious violence and expressions of religious intolerance.

It is worthwhile, therefore, to measure the extent to which religious rhetoric has come to infuse campaigns for local office. Indonesia’s General Electoral Commission (KPU) has recently, and for the first time, made available a database that collects information on the demographic characteristics of legislative candidates—including information on age, religion, education, marital status, and even whether they have been investigated for corruption.

The database also includes hand-crafted statements of “motivation” and “platform,” in which candidates are given the opportunity to editorialise their decision to run for elected office and their intentions once in power. These statements are a rich source of data to evaluate whether (and which) candidates are exploiting religious rhetoric for electoral gain. One candidate in Kabupaten Jember, for example, says she is running to “enforce sharia law.”Another candidate in Jakarta says he is running to “defend the interests of Muslims,” among other reasons.

At the moment, the data are incomplete. So far only 64.1% of candidates have submitted the relevant information. Particularly candidates formerly accused of corruption have protested the new system and many have not made their information public. Given the near-ubiquitous nature of corruption allegations, however, it seems unlikely that this bias is correlated with the probability of a candidate to employ religious rhetoric in their platform. Biases notwithstanding, these data provide the most comprehensive portrait of candidates for legislative office: a total of 154,703 candidates (out of 241,036) have submitted profiles. Of these candidates, roughly half (72,486) opted to include a platform statement.

Using this new source of data, I examined the proportion of candidates referring to religious themes in their platforms. This involves deciding which words are “religious.” I only looked at the words that occurred more than one hundred times in all of the candidate statements. I then coded words as explicitly religious, which I then used to identify candidate platforms employing religious rhetoric. These words included “Allah,” “Islam,” “agama”, “umat,” “syariat,” “muslim,” and “dakwah.” This approach does not code for the direction of the platform—e.g., it might be the case that a platform mentioning “sharia” is actually condemning it. An inspection of the data reveal that this concern is rarely—if ever—the case.

A cursory analysis of these data reveals three striking insights into the use of religious rhetoric in Indonesian politics. First, comparatively few candidates make religious appeals in their official platforms. Candidates from the traditionalist Islam-based PKB running for seats in the national legislature (DPR) are the most likely to make religious appeals—over 50% of candidates running under the banner of PKB do so. However, these candidates are the exception rather than the rule. On average, and across all elections, only 5.7% of candidates refer to religious themes in their platforms. 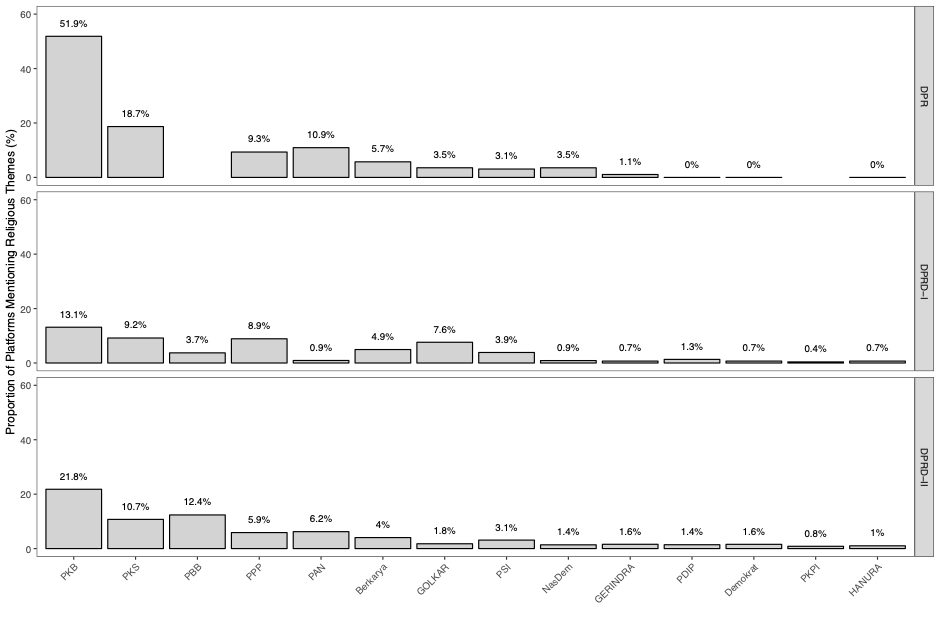 Data for 72,486 candidates for legislative office, collected by the Komisi Pemilihan Umum (KPU). No candidates for the national parliament from the Islamist PBB party submitted platform statements in their profiles.

Third, and more predictably, the data reveal sharp differences across parties in terms of candidates’ likelihood to use religious rhetoric in their platforms. For example, candidates running under the banner of PKB are roughly 16 times more likely than candidates from PDI-P to employ on religious rhetoric in their platform (23.4% vs. 1.4%). This broadly confirms recent research showing that religion is the most salient ideological cleavage among Indonesian parties.

One concern is the possibility that these findings are driven by the incompleteness of the data. It might be the case, for instance, that religious candidates are less likely to submit platform statements—which could cause to a downward bias in the observed rates of religious rhetoric in platforms. To examine this possibility, I looked at the proportion of candidates with missing platform statements, by party (religious or not). The results suggest that there is little reason to suspect that religious parties are more—or less—likely to submit platform statements: both the highest and lowest rates of missing platforms (65.0% and 35.7%) come from religious parties (PPP and PKS, respectively).

The article originally appeared in www.newmandala.org on March 26, 2019.