The Future of Low-Skilled Manufacturing Labor in Industry 4.0

Nazla Mariza was awarded a Hubert H. Humphrey Fellowship Program for Mid-Career Professionals grantee at The Center for Public Policy Transformation, Jakarta in 2017

The article originally appeared in www.csisprosper.com on August 19, 2019 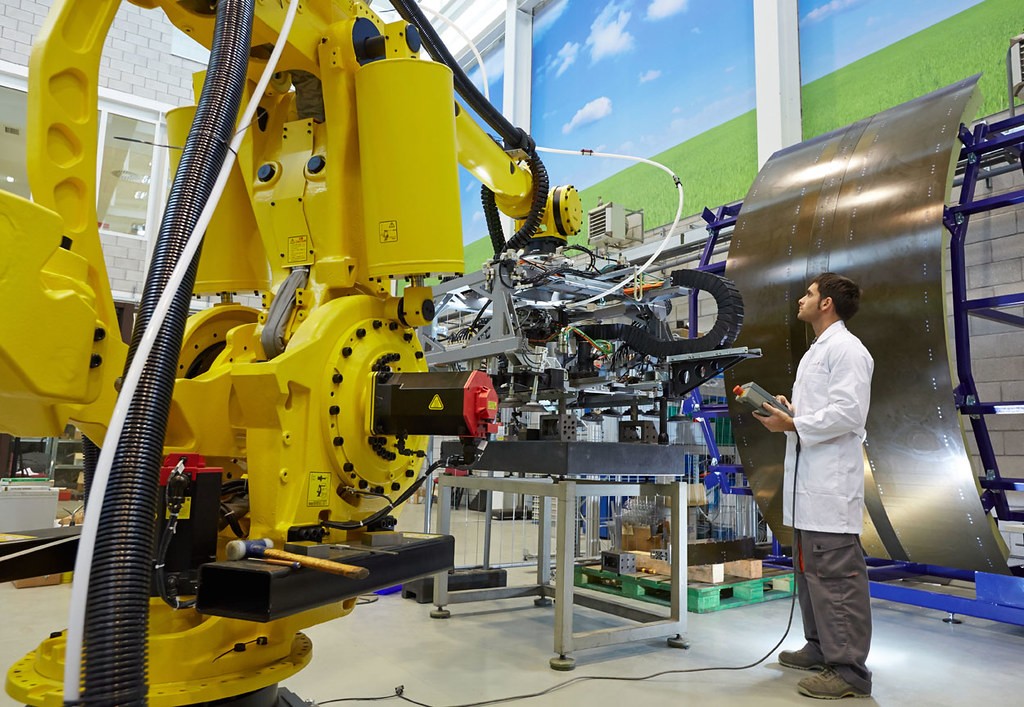 Since the era of industrial revolution (IR), the manufacturing sector relied heavily on low-skilled physical labor, making it one of the largest job producers. Developing countries with large populations took advantage by offering abundant numbers of low-wage workers. China, as a country with the largest population in the world, has been benefitting from this situation. Their economy has been growing by hosting major manufacturing industries from foreign investment since early 1990s.

Technological advancement, or industry 4.0, has been influencing different aspects of human life including manufacturing. With investment in R&D, AI and robots are more efficient than human power and will eventually replace labor; its cost will no longer be the main consideration in manufacturing. This commentary will look at technology wave in manufacturing, its move toward a capital-intensive model, and the future of labor-intensive industry in developing countries.

The contribution of manufacturing to development

Historically, manufacturing has had significant contributions to economic development through dual function productivity gains and job-creation for low-skilled workers. Countries at the forefront of the industrial revolution now earn higher incomes on average. During the first IR, the manufacturing sector relied heavily on low-skilled physical labor, making it one of the largest job producers. Some economists believe that investing in manufacturing will effectively reduce poverty as it provides a steady income to the poor—at least initially—before boosting productivity. In the era of globalization, manufacturing processes often span several countries to produce a commodity. High-Income Countries (HICs) outsource some of their production processes to cost-effective locations. Countries with a large pool of low-wage laborers attract foreign companies and often gain the dual benefit of developing their manufacturing industry.

The Rise of China’s Manufacturing Sector

Shifting manufacturing to developing countries helps boost the economy. China is now a powerful emerging economy with the second largest gross domestic product (GDP) in the world after the U.S. Manufacturing is the foundation of China’s economic growth, which has prospered because of outsourced manufacturing activity, accounting for almost half of its GDP.

China has successfully expanded its manufacturing industry by changing and harnessing its comparative advantages in the 1980s and 1990s through privatization and opening markets to international trade. China has also been successful in maximizing its large pool of low-skilled laborers by using low wage/labor cost ratio in developed countries. Additionally, there are other benefits that China offers to companies, such as competitive product prices along with flexible minimum quantity supply chain systems. These reforms helped China engage in the international market and become a successful breeding ground for manufacturing, receiving an overflow of outsourcing from various companies.

Foreign investment has supported the manufacturing industry and economic growth has increased dramatically by 9 to 14 percent from 1992 to 2011. This growth has been sustained for over 20 years, making China the single largest producer of manufactured goods in the world and accounting for 10 percent of total global exports ($2.1 trillion). It is not surprising that China’s export of goods and services has increased by 43 times in under three decades. The poverty level has decreased from 6.6 percent in 1990 to 1.4 percent in 2014, although inequality remains high at 42.2 percent in 2012.

In the era of digitalization, technology innovation has affected the manufacturing industry. This change presents opportunities and challenges, but how can major players such as China capitalize on the opportunities of forthcoming technological advancement?

China’s rise to power in the international economy was successful, in part, because it had the right set of conditions. However, countries that aim to mimic China’s pathway to development face an obstruction to growth that China did not have – the Fourth IR (4IR). Manufacturing is transforming with the introduction of new technologies such as AI, robotics, 3D printing, and automation. The manufacturing sector will soon likely implement the use of innovative technologies that could eventually replace some manufacturing jobs – displacing existing human labor. For example, robots can build cars, but no one has yet made a robot that can sew a shirt, at least at a cost that would allow the producer to sell the shirt at a competitive price. As a result, productivity and revenues are predicted to spike— at the cost of downsizing of up to 25 percent.

Given that HICs have established R&D facilities and high-skilled laborers (i.e. scientists, computer technology specialist, innovative product designers), they will likely benefit from digitalization and engage more with it. Potentially, HICs may move global production back to their own countries, as low labor cost becomes less relevant in determining production location.

Low- and middle-income countries (LMICs) will feel the biggest impact as they can no longer rely on labor cost for their comparative advantage. A critical question will be whether new technology trends will impede on manufacturing activities across LMICs or create new opportunities. Do LMICs need to focus on improving their competitiveness in producing traditional goods?

It is interesting to see how the transformation will affect the kings of manufacturing. China has been preparing itself to adapt to this emerging technology trend, realizing the need to be flexible. In 2015, China launched “Made in China 2025” (MC2025) intending to prepare itself to enter the age of smart manufacturing. China also aspires to be the biggest technological power by 2050. The MC2025 document outlines China’s response to Germany’s “Industry 4.0” and the “Industrial Internet” in the U.S.by developing ten industries, namely next-generation IT. This includes high-end numerical control machinery and robotics; aerospace and aviation equipment; high-tech maritime engineering equipment  and biopharmaceuticals. This big leap marks a shift in China’s manufacturing industry toward a more capital-intensive industry.

This ambitious plan will position China as the world’s manufacturing superpower, enabling it to reach HIC status. To do so, China realizes it can no longer rely on producing cheap goods. The Chinese government aims to move up the value chain to produce more advanced products and establish its domestic technology, removing foreign dependency.

To support all these ambitions, China has been committed to R&D activities, whose budget has been increasing every year to levels much higher than its competitors. In 2015, according to UNESCO Institute for Statistics, Germany allocated $110 billion to R&D, South Korea issued $73 billion, and Japan allocated $170 billion. China surpassed these countries’ budgets combined, with $370 billion that same year.

Despite high R&D investment, the use of robotics in manufacturing is still relatively low in China. In 2016, China developed on average 19 industrial robots per 10,000 industry employees, much less than Germany, which produced 301, and South Korea’s 531. This demonstrates that HICs may still play a key role in manufacturing if they can maintain their competitiveness in high innovative technology. Notwithstanding, China may soon catch up given its aggressive technological development. Recently, China opened new institutes for robotics and AI that aim to facilitate the transformation of traditional industries.

Despite the rise of automation, it won’t replace sectors that require human emotions, creativity, and instinctive decision-making (e.g. service industry, tourism, hospitality and nursing).China will be less competitive in producing labor-intensive goods such as car parts, electronic products, garments, textiles, shoes and toys with its declining work-age population expected to continue decreasing to 830 million in 2030. This affects the increase of labor costs ($9,907 annual labor wage in 2017).

However, there are concerns. Moving operations out of China to other countries is difficult. Some hindering factors include low productivity, inadequate supply and engineering, logistic costs and poor infrastructure. Thus, paying higher labor wages in China remains more competitive. If other developing countries want to take up the spill-over share from China, nothing is more essential for them than to seriously rebuild their comparative advantage. Developing effective macroeconomic policies and a robust financial sector is a must.

If developing countries with big population and fast economic growth such as India and Indonesia fail to seize the chance from China, new players will possibly take over. There are new frontier markets in Asia such as Sri Lanka, Bangladesh, and Vietnam, while Nepal, Cambodia and Laos have been preparing for economic growth.

What will happen in the future?

The future of economic growth in this region will depend on a variety of factors. Many of these are uncertain, but one: the competition among China, HICs and LMICs will continue. Countries still have a chance to enhance their unique competitiveness if they act strategically. The division of roles is possible if each can provide value in the chain of manufacturing process. Some could supply raw materials, while others focus on production or logistics. Failure to diversify will pave the way for China to be the single manufacturing superpower in the world. Support from HICs to LMICs in increasing LICs capacity in global value chain can help.

Challenges are not merely about automation, but also about the reallocation of resources to growing sectors such as the services industry. The growing pace of manufacturing will likely require greater services, whether as inputs, activities within firms or as output sold bundled with goods. This is known as “servification”, which means manufacturing sectors increasingly rely on services. Services account for about one third of value-added in manufacturing sales and exports, creating opportunities for LMICs and HICs to play a role as service suppliers.

The growing population in developing countries and ageing population in developed countries, create demand for the service sector. So, the problem is not a lack of need but one of effectively addressing the demand. The people who need healthcare, transportation, and education cannot afford it, and the government must step in to address the future shift of labor and service demands and adjust to changing needs.